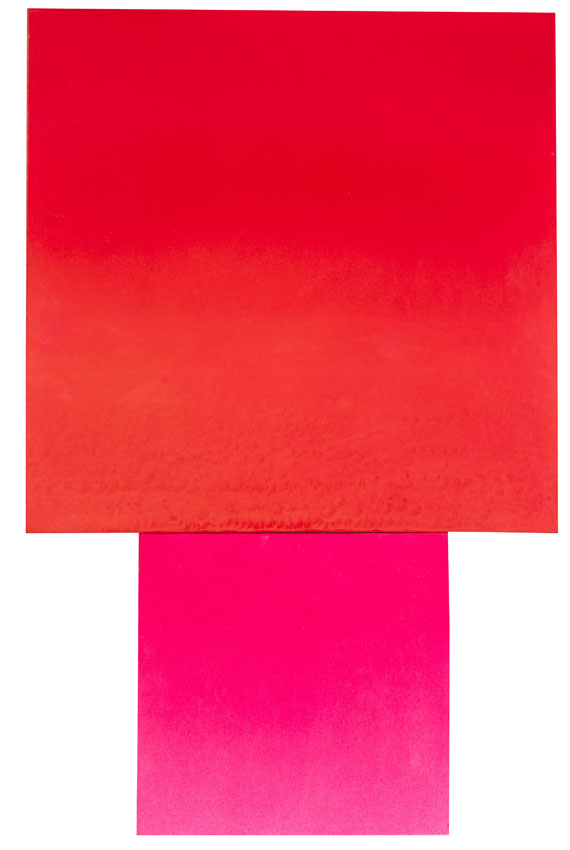 Essay
This color-intense work was made in 1982. In line with the virulent tendencies that have coined the artist's creation since the 1960s, it is particularly captivating for its composition with similar color shades. In most cases Geiger worked in the color groups blue-black or - as it is the case with this work - in lucent orange-red-pink. The works obtain their unusual effect through the soft modulation within the color fields, in this work they are separated by the two interleaved canvasses, at the same time they are chained to one another. In front of the observer's eye the two fields expand to a three-dimensional color space that seems to be intensively glowing and permanently changing. Staged in such a manner, Geiger adds an autonomous value to the color. Especially the color red suggests associations of energy, power, love, warmth and strength and has an intensively stimulating function. This kind of expressive reduction is what Rupprecht Geiger shares with other artists such as Thomas Lenk, whose acclaimed work "Schichtungen" from 1968 (cat. XX ) was on display at Geiger's studio up until his death in 2009. Lenk created this sculpture for the documenta IV in Kassel, in 1970 he also showed it at the German pavilion at the Venice Biennial. Later he gave it to his artist friend Rupprecht Geiger as a sign of his appreciation. The mechanical reduction of Lenk's sculptures echoes in the color reduction in Geiger's works.
More Information
+
Sell
Would you like to sell a similar object?
+
Register for
Rupprecht Geiger
+
Buying from A-Z
+
Contact a specialist
+
Rupprecht Geiger Biography
Share