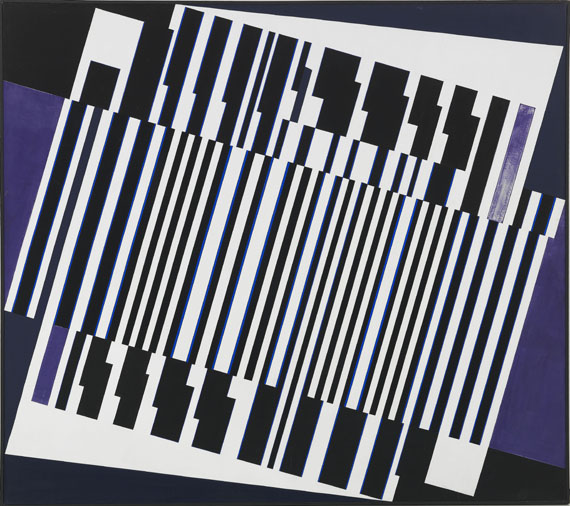 The classic and strict compositions from Günther Fruhtrunk occupy a special position in German post-war art. Especially the artist's years in Paris, where Fruhtrunk was active between 1954 and 1966, were coined by his attempt to extravagate geometric abstraction. This is also the case with our work, in which the geometric image space gains momentum and is destabilized through the elements' diagonal shift. The stripes' rhythmical arrangement and the effect realized by color and light make for a special optical sensation, as the observer's eye tries to capture the coaction of the image's background and the various levels of depth. Fruhtrunk's works are unsentimental and factual and yet characterized by a deep emotionality. His visual worlds are an essential part of German Modernism after World War II.
More Information
+
Sell
Get a free appraisal for a similar object!
+
Register for
Günter Fruhtrunk
+
Buying from A-Z
+
Contact a specialist
+
Günter Fruhtrunk Biography
Share