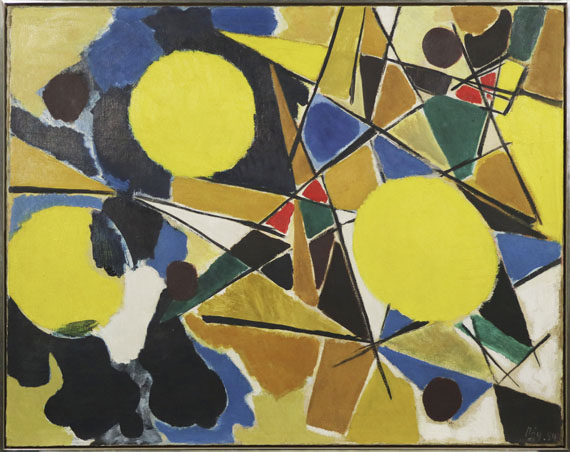 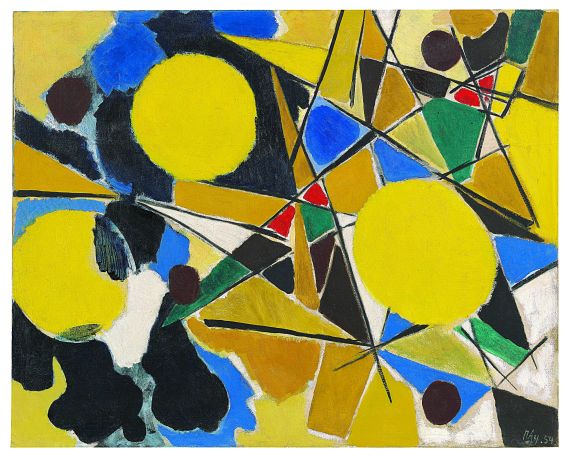 Ernst Wilhelm Nay and the gallery G ünther Franke are inseparably connected. It is in the nature of big art dealers to have a deeply personal connection with the artists they represent, aside from their business relations. This was also the case with Henri Kahnweiler and Paul Cassirer. For Ernst Wilhelm Nay Günther Franke was not just the broker of his art. The correspondence between them shows how close and personal their exchange was. The catalog published on occasion of the 50\up6 th anniversary of the Galerie Günther Franke in 1973 only contained works by Ernst Wilhem Nay. This work was also sold through the Galerie Günther Franke. As it has been mentioned before, the oeuvre of Ernst Wilhelm Nay is characterized by several different periods. This work by Ernst Wilhelm Nay is an early work from the “Scheibenbilder” (Disc Pictures), one of the artist's most famous series. However, the work still shows notions of the previous series of the "Rhythmischen Bilder" (Rhythmic Pictures), as it is still determined by a strong rhythmical gesture expressed by the individual color forms and their interrelations and accompanied by a pulse of black line structures and dots. Nay's concept of music as a source of inspiration comes to mind right away, for instance by works from Strawinsky, Hindemith and Schönberg or the then progressive composers Nono, Boulez and Stockhausen. Over the following years Nay's color fields would become more and more like discs and accompany the artist's transition to color field painting.
More Information
+
Sell
Get a free appraisal for a similar object!
+
Register for
Ernst Wilhelm Nay
+
Buying from A-Z
+
Contact a specialist
+
Ernst Wilhelm Nay Biography
Share