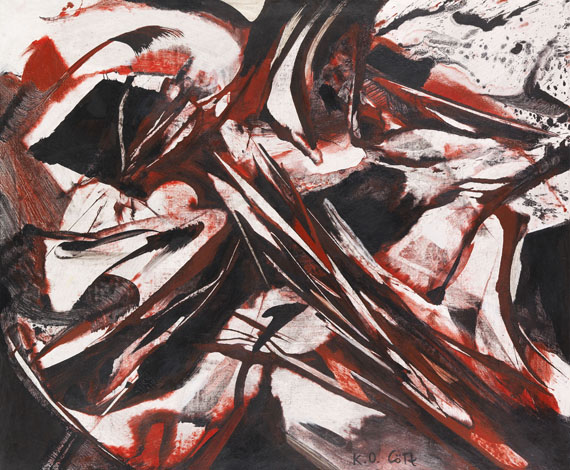 We are grateful to Mr Joachim Lissmann, K.O. Götz and Rissa Foundation, for his expert advice.

Essay
The gestural and spontaneous painting process, to which Karl Otto Götz, a main representative of German Informel, was obliged throughout his life, is all in line with the discovery of new painting techniques, which the artist described as follows: "When I was mixing glue for my son in summer 1952, I coincidentally came across my fast painting technique: First glue on paper, then the gouache in it, and that’s it – the picture is done [..] The step from cardboard (gouache) to canvas was self-incidental. In winter 1952/53 I found the technique and conception, that would determine my picture’s structure from that point on [..]" (quote after: H. Zimmermann, in: ex. cat. Staatliche Kunstsammlungen Dresden et al, 1994, p. 12). In combination with the squeegee technique, which Götz had brought to perfection, for which liquid paint is applied to the primed image carrier, and then treated in the following step, the artist’s characteristic style results. In our work, this is expressivity and dominance is even more increased by adding the color red.
More Information
+
Sell
Would you like to sell a similar object?
+
Register for
Karl Otto Götz
+
Buying from A-Z
+
Contact a specialist
+
Karl Otto Götz Biography
Share 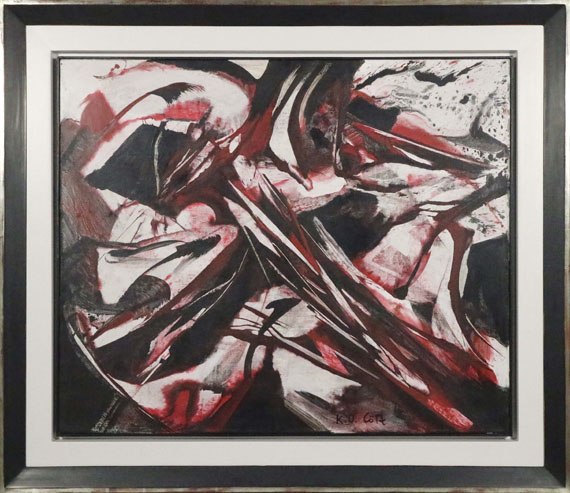