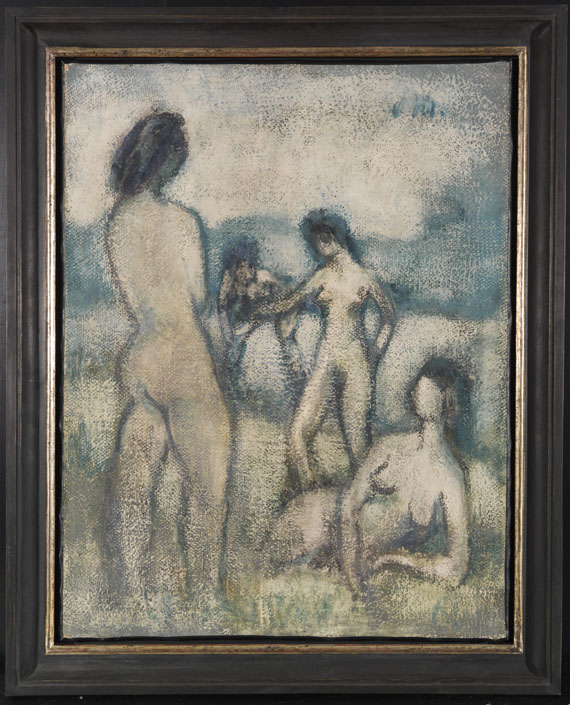 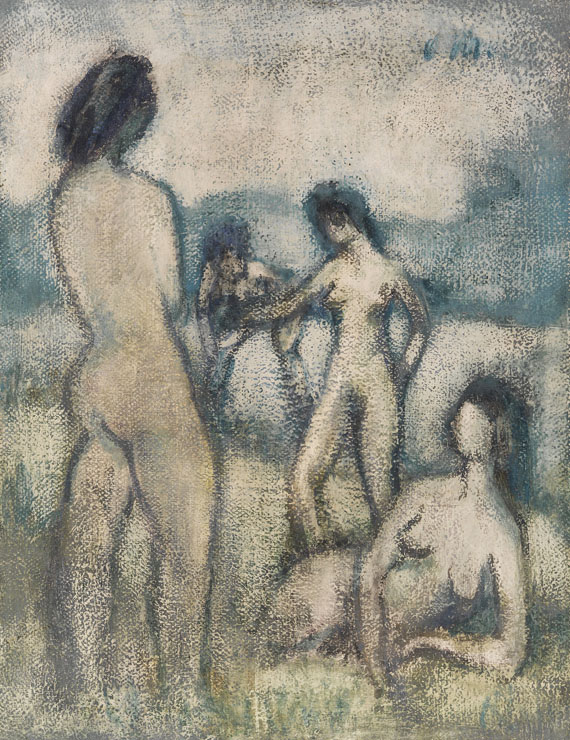 Otto Mueller‘s artistic progressiveness is well-documented for the year 1910. Following his relocation to Berlin the young artist unavailingly tried to join the established group of artists of the Berlin Secession in 1908. After the jury had refused him and other expressionist artist admittance, they decided to found the New Secession with Max Pechstein as president. Mueller came in contact with members of the "Brücke" and remained part of the important expressionist artist group from 1910 until its breakup in 1913. Otto Mueller, whose oeuvre is characterized by an ideal of man free from the restraints of civilization, added an entirely new level of significance to the landscape nude through his very own interpretation. Even though he was assigned to the expressionists, Otto Mueller pursued a goal in his works that he did not share with his contemporaries. The latent bucolic atmosphere that characterizes his paintings, is the core idea of his approach to an idea of man. His figures emanate a pure and calm inertia, a closeness to nature that one can‘ t find in the most important works of his contemporaries. The technical innovation of painting in glue-bound distemper on coarse burlap was in line with the quest for nativeness, accordingly, it is this very impression of the unfinished that makes Mueller‘s artistic creation in general and this dreamy illustration of the "Vier Badenen" (Four Bathers) in particular so unique. It is a very special document of how Mueller distanced himself from the established tendencies in art of his days and how he performed his very own ‘Dawn of Modernism‘. Even though the composition and the pastel colors show certain parallels to his impressionist precursors at first sight, Mueller emancipated himself not only through the "coarse" execution but also through his unique color scheme: Mueller puts landscape and figures onto the rough canvas with the same palette, creating a composition that is lost in reverie, its accentuation entirely put on the bodies‘ dark contour and the black hair. In order to underline their significance, Otto Mueller intentionally placed the figures in this work in an imaginarylandscape.He reduces his nude compositionsto the simple and natural aspects. His figures are well-aware of their physicality and their absolutely certain existence. They embody an unrestrained idyl beyond reach amidst a hectic and ever changing urban world of unfulfilled desires.
More Information
+
Sell
Get a free appraisal for a similar object!
+
Register for
Otto Mueller
+
Buying from A-Z
+
Contact a specialist
+
Otto Mueller Biography
Share