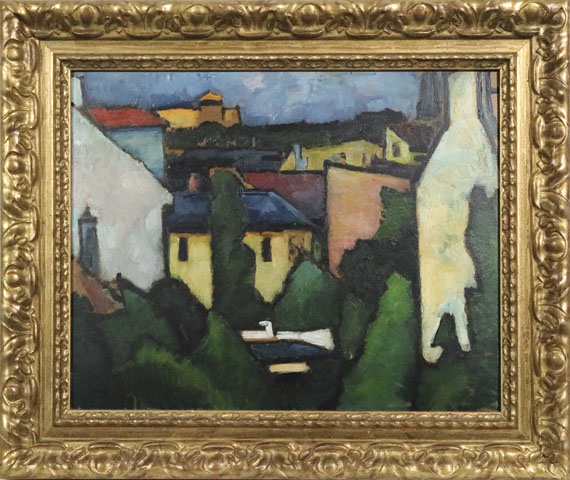 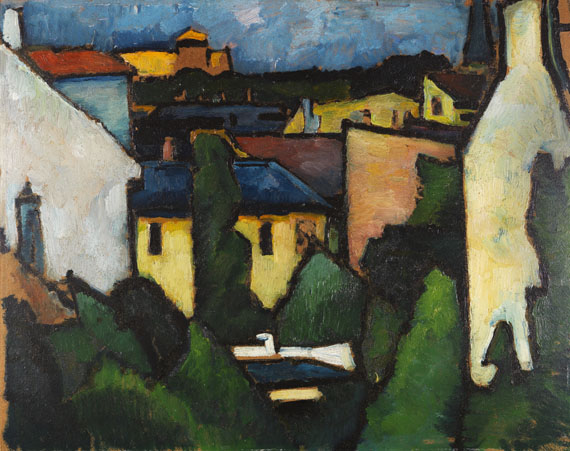 The work will be included into the forthcoming catalog raisonné compiled by Dr. Michael Koch, Munich.

In the years 1910/11 Alexander Kanoldt lived on ‘Nikolaiplatz’ in Munich/Schwabing. The view from the window of his studio over the rooftops of Schwabing, formerly a village that had become part of the city, is a typical document from a time of stylistic transition that Alexander Kanoldt’spaiting underwent in those days. From plein-air painting under the influence of academy teachings over attempts in Divisionism, Kanoldt found his artistic path in the consolidating forms, a path he would follow and refine until the end of his life. Kanoldt had major influence on the development of New Objectivity, for which the transition period around 1910/11 played a key role. As member of the "Neuen Künstlervereinigung München", from which the "Blaue Reiter" emerged, Kanoldt followed a route that led him to his very own concept of color and forms under the impressions of the exchange with his artist colleagues, especially with Jawlensky. The fact that Kanoldt left all academic influence behind becomes particularly obvious in the primary color application on the unprimed cardboard of this work. His preference for pure surface colors for the pictorial elements also indicates the unorthodox style that Kanoldt had attained by these important days around 1910/11.
More Information
+
Sell
Get a free appraisal for a similar object!
+
Register for
Alexander Kanoldt
+
Buying from A-Z
+
Contact a specialist
+
Alexander Kanoldt Biography
Share