PROVENANCE: Collection Bruno and Sadie Adriani, Berlin and Monterey/California (the jurist and art collector Bruno Adriani was active as lawyer in Potsdam as of 1910. Over the years he compiled an extensive collections of paintings. After his move to Geneva at the end of 1930s and his emigration in 1936 he bequeathed a large part to the Fine Arts Museum of San Francisco in the 1960s).
Rose Marie Chamberlin, Los Angeles (inherited from aforementioned).
Private collection Los Angeles (gifted from aforementioend between 1985 and 1989).

Essay
Liebermann‘s tremendous graphic skills and his technical perfection become particularly obvious in this pastel. This work captures all the beauty of the view onto the garden on Wannsee, which opened up from his house down to the lake. The bold lines in the tree‘s foliage are proof of Liebermann‘s spontaneous act of capturing this happy moment in the beloved garden of his summer residence. Max Liebermann‘s paintings and pastels of his famous garden on Wannsee mark the heyday of German impressionist landscape painting at the beginning of the first half of the twentieth century. Max Liebermann, along with Corinth and Slevogt, created the very accomplishments, which, next to the art of Expressionism and New Objectivity, are the art-historically most relevant documents of German art from these decades of transition.[KD]
More Information
+
Sell
Would you like to sell a similar object?
+
Register for
Max Liebermann
+
Buying from A-Z
+
Contact a specialist
+
Max Liebermann Biography
Share 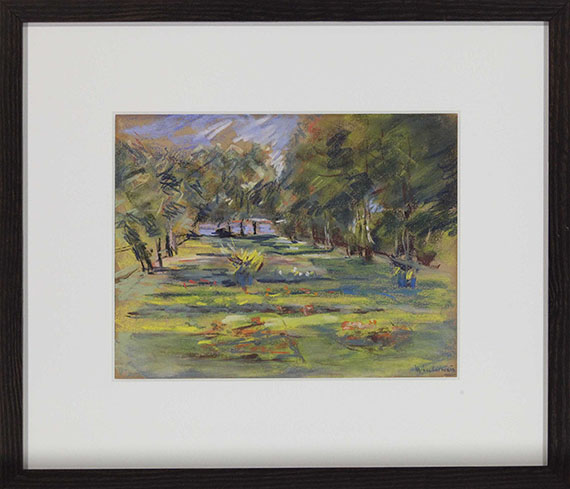