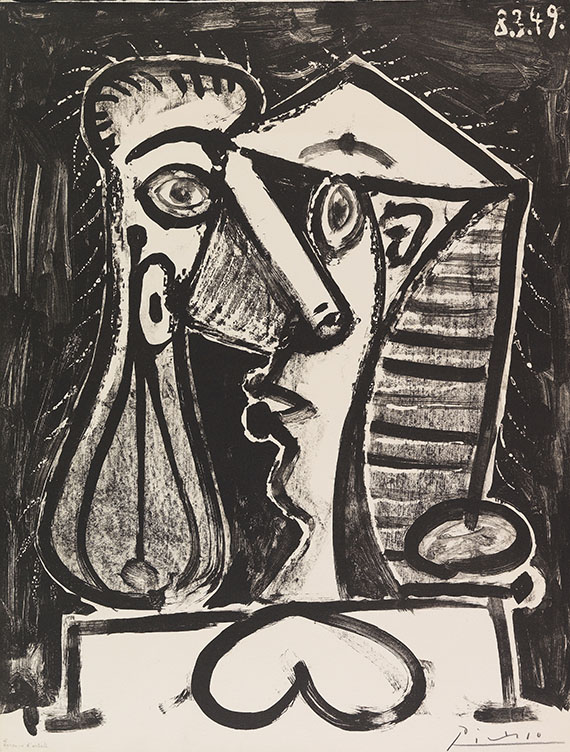 Whenever Picasso became occupied with a new artistic technique, he explored its entire range of technical opportunities. The method of graphic reproduction occupies a significant position in Picasso‘s immense oeuvre and is closely linked with his artistic development. Forms, motifs and subjects oscillate between different artistic mediums and hence also occur in his graphic creations. From the early 1920s on the lithograph moved to the center of his attention, as it offered the artist an inexhaustible abundance ofstyles and forms of expression. The cooperation with the Mourlot brothers as of the end of World War II marked the most intensive occupation with lithography. This work "Figure composée II" was made in an edition of 50 copies at the Mourlots‘ print shop in 1949. The abstract figure composition is a very typical and timeless work from Picasso. Hundreds of works came into existence at the Mourlot print shop in Paris – Picasso even lived with the Mourlot brothers for several months. In those day he experimented with the medium and probed its limits, at times he drove the printers to the brink of despair: Gaston Tuti, one of the Mourlout‘s print masters, commented on the artist‘s unorthodox methods half tongue-in-cheek, half sincere: "How can one print something like that? [.] That‘s an iniquity." (Françoise Gilot / Carlton Lake: Leben mit Picasso, (Munich 1965) Frankfurt/M. (3rd edition, January1967) 1970, p. 85). [EH/CG]
More Information
+
Sell
Get a free appraisal for a similar object!
+
Register for
Pablo Picasso
+
Buying from A-Z
+
Contact a specialist
+
Pablo Picasso Biography
Share