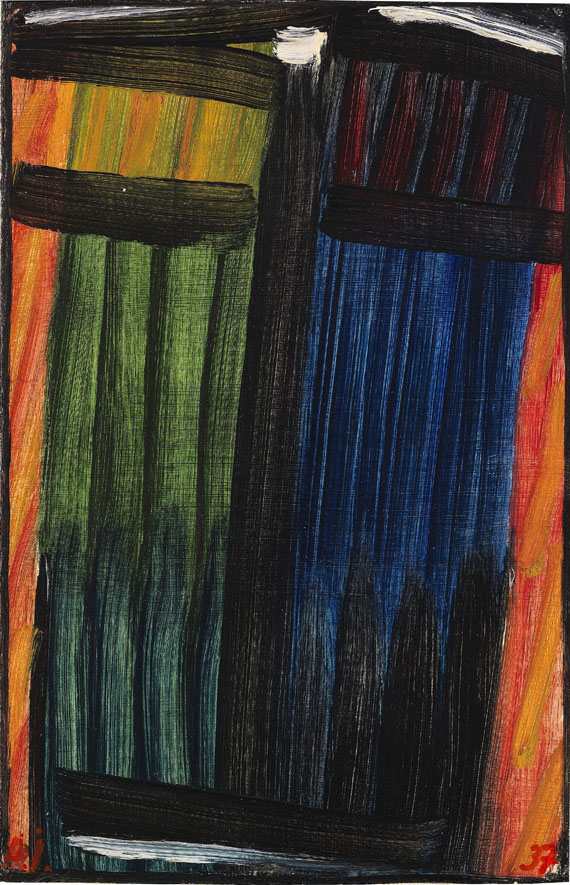 Accompanied by a confirmation from Maria Jawlensky dated 21st January 1990 (in copy).

Jawlensky wrote in his memoirs: "My last period of works has very small formats, but the pictures are deeper and more spiritual, only the colors speak. Because of my illness I felt that I would not be able to work in the future, so I worked like crazy on my small meditations. And now I am leaving these small but important works to those who love art."
Alexej von Jawlensky, quote in: Tayfun Belgin (editor), Alexej von Jawlensky, Reisen, Freunde, Wandlungen, ex. cat. Dortmund 1998, p. 119.

Based on the expressive portraits from his early period of creation, Jawlensky created ever more striking and deeper pictures over the years, free from any individual properties, it is the graphic vision alone that makes for the essence of his quest for the inner image. The key element is always a color interpretation of the inner state which Jawlensky summarizes in a composition of the meditative and inaccessible. Any sense for details, which are nothing else but distraction, is impossible. The concentration to the icon, which had been attained through a long process, the face behind the actual face, that is the secret behind these deep creations. Within the artist's oeuvre, the Meditations are an independent comprehensive work complex that decisively characterized Jawlensky's artistic creation. Owed to his contemplative character and his extraordinary formal strictness, Jawlensky occupies a prime rank in European art history. [JS]
More Information
+
Sell
Get a free appraisal for a similar object!
+
Register for
Alexej von Jawlensky
+
Buying from A-Z
+
Contact a specialist
+
Alexej von Jawlensky Biography
Share