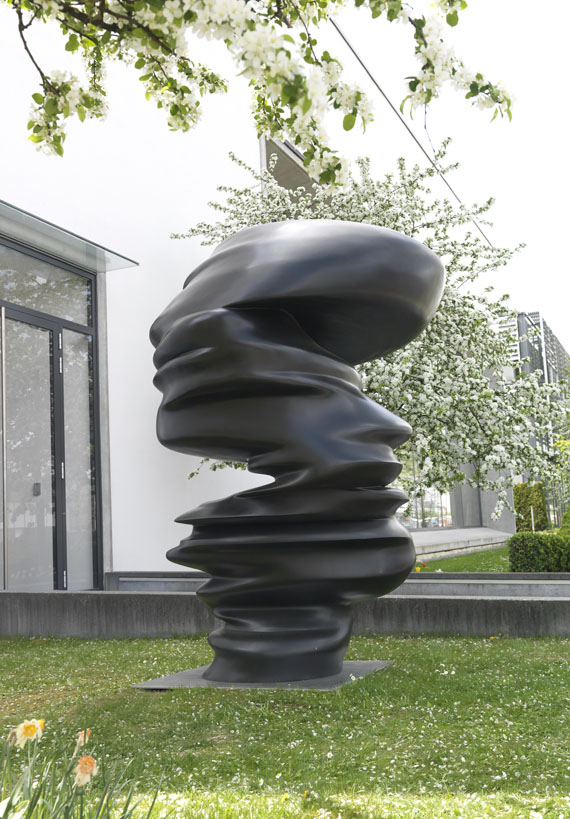 The work of Tony Cragg, who soon became one of the most important representatives of "New British Sculpture", saw a decisive turning point in the mid 1980s: Instead of arrangements of plastic and wooden objects, which were typical for his early period of creation, he began to make large-size bronzes with initially strong figurative references. Over the following years they were liberated from formal constrictions of concreteness, as it is the case with the series “Early Forms“. At times developed from different types of vessels – like ancient tankards, modern canisters and plastic bottles – Cragg squeezes and turns the shapes merging them to new and independent kinetic structures with a shape seemingly formed in front of our eyes by an inner force. The organic surface structure of these works reveal the artist‘s scientific background. Especially the sandwiched structures from Tony Cragg‘s significant late period of creation are unique objects that alternate between nonrepresentationalism and biomorphism, exploring boundaries between abstraction and figuration, between free forms and figural associations. This way they do not only point to Cragg‘s scientific beginnings as lab assistant in the 1960s, they are also impressive documents of his artistic occupation with forms and figurations that seize the space around them and directly integrate it into the composition as means of creation. Cragg modeled the elliptical shapes of the sandwiched discs of our monumental bronze from the famous work series "Points of View" by means of paper gauges and plywood models. On the one hand, their massiveness seems to suppress the sculpture‘s surrounding space, on the other hand, their broken and vibratory aspect lets them appear fragile and free from physical massiveness.
In line with the title "Point of View", Cragg‘s monumental sculptural creations, which are cast in small editions only – just like it is the case with this work – offer ever new perspectives when walking around them, begin to oscillate anew from every angle and leave room for alternating figurative associations.
Today Tony Cragg‘s sculptures are in renowned public collections like London Tate Gallery, Museum Ludwig in Cologne, Stadtische Galerie im Lenbachhaus, Munich, Museum Folkwang, Essen, and Von der Heydt Museum, Wuppertal. The latter honored Cragg‘s remarkable sculptural oeuvre in a grand retrospective in 2016.[JS]
More Information
+
Sell
Get a free appraisal for a similar object!
+
Register for
Tony Cragg
+
Buying from A-Z
+
Contact a specialist
+
Tony Cragg Biography
Share