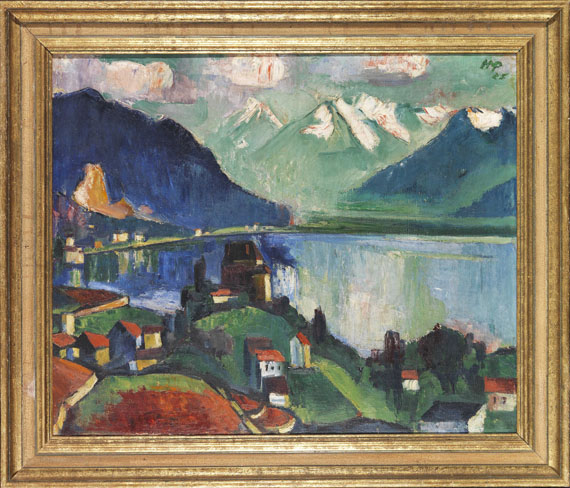 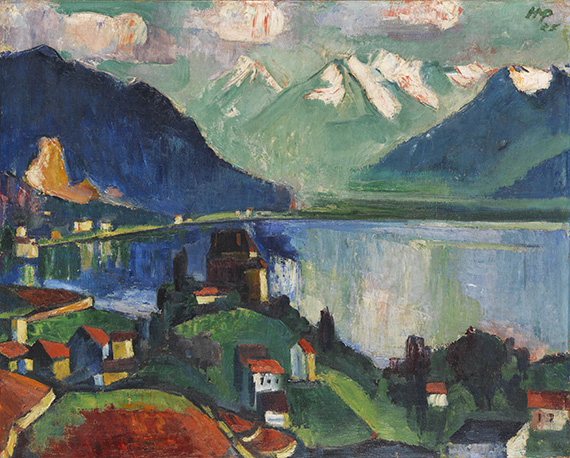 PROVENANCE: Art Trade, Pforzheim (1955).
Private collection Bremerhaven (since 1955 family property);
from which it was was permanently loaned to Kunsthalle Emden (2006–2018; with label on frame covering).

LITERATURE: Wilhelm Michel, Der Münchener Glaspalast 1926, in: Deutsche Kunst und Dekoration, vol. 58, April – October 1926, pp. 347–364.
"Even though my economic existence had been destroyed by inflation and the breech of trust with my art dealer and my marriage got divorced, I still have my work. [..] I dwelled in my studio all on my own. A Swiss physician, Dr. Minnich, stopped by to get to know me and my work. He urged me to close down everything in Berlin and to follow him to Montreux on Lake Geneva as his guest for a couple of years. I had found a new companion after the disappointments of the post-war years. Full of hope I embarked on a journey into a new life."
H. M. Pechstein, quote after Max Pechstein, Erinnerungen, Stuttgart 1993, p. 108.

Max Pechstein made the decision to "avoid the metropolis Berlin this winter" as early as in August 1924 (quote from: Soika vol. II, p. 16) and this plan was eventually realized when his longtime friend and patron, the Swiss physician Walter Minnich, invited him to Montreux in September that year. Pechstein left Berlin mid November. In Montreux he was occupied with the execution of sketches he had made in summer 1924, some of them during a stay in Italy. In early 1925 he made a few works in front of the impressive landscape of Lake Geneva, unfortunately, most of these works are considered lost today. Our view "Am Genfer See" was made from a point outside of Montreux and has been on display at Kunsthall Emden as permanent loan since 2006. It is a particularly fine document of Pechstein’s carefree days from which the artist returned to Berlin in late March the following year. What is especially striking is the mountain range in the background and the way it merges with the turquoise sky and the lake’s glistening surface, its snow-covered peaks – just as the white clouds – seem to hover above the green and blue color fields that surround them. Perhaps the airiness that our marvelous spring landscape emanates is not only owed to the compelling scenery but also to the fact that Pechstein’s time in Montreux was without a care in the world since he enjoyed the generous hospitality of the pulmonary specialistand art collector Walter Minnich. Minnich, who was one of Pechstein’s most important contacts in the first half of the 1920s, maintained regular correspondence with the artist about his latest works and compiled a remarkable expressionist collection that included numerous paintings by Pechstein at his estate in Montreux between 1912 and 1936. He donated a better part of the collection to the Kunstmuseum Lucerne in 1936. [JS]
More Information
+
Sell
Get a free appraisal for a similar object!
+
Register for
Hermann Max Pechstein
+
Buying from A-Z
+
Contact a specialist
+
Hermann Max Pechstein Biography
Share