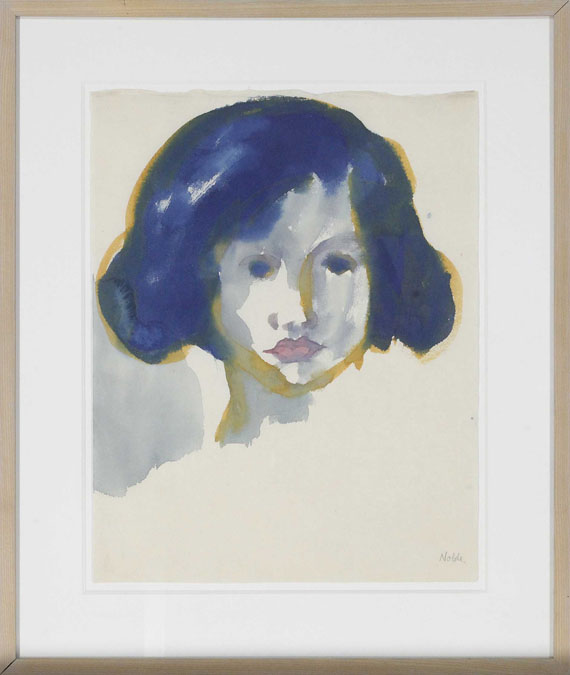 Accompanied by a photo expertise issued by Prof. Dr. Manfred Reuther, Klockries, former director of the Foundation Ada and Emil Nolde, from May 2, 2018. The work is registered in his archive with the number "Nolde A - 82/2018".

PROVENANCE: Galerie Vömel, Düsseldorf.
Collection Dr. Hugo and Madeleine Simons, Rhineland, later Montreal, Canada (acquired from aforementioned between 1926 and 1933, ever since in possession of the family).

"What are rules? What‘s caprice and intemperance? Every true artist creates new values, new beauty and new rules [..]. The new and beautiful that comes into existence is often dismissed as arbitrary and debauched, as it does not bend with the old rules. These are the accusations every genius has to face."
Emil Nolde (quote from: Hans Fehr, Emil Nolde - Ein Buch der Freundschaft, p. 42, 1957)

Emil Nolde‘s portraits reveal a lot about the painter‘s attitude towards life. Despite the seclusion, also in social terms, he and his wife Ada had found in Seebüll, he made portraits every now and then, usually of young women in front of a fictive background with a mysterious presence that occupies almost the entire image area. The names of the portrayed girls are unknown, but they leave an impression with the observer through the mystical and aloof aura that Nolde saw them in. Emil Nold wrote on October 9, 1926:"The artist is a sensitive and shy being, often suffering and pined away. Almost all people are his enemies, his friends and relatives are the worst. The artist dwells behind walls, timeless, rarely outgoing, often retreated into his shell. A strange and deep liking for nature and the bright open reality, clouds passing by, blossoming flowers, creation. Unknown and unnamed people are his friends" (quote from: Ernst Gosebruch, Emil Nolde, Lübeck 1947, p. 2). His portraits also reveal something about this deeply felt escapism. The depicted lady seems lost in reverie, an impression underlined by the free flow of colors and the absence of preliminary drawing or other graphic elements. The delicate coloring and the partly blank sheet emphasize her fragileness. She dominates a composition characterized by a striking immediacy. This watercolor is yet another document of his mastery in watercolor painting, as it finds fulfillment in an airiness unusual for Nolde. [SM]
More Information
+
Sell
Get a free appraisal for a similar object!
+
Register for
Emil Nolde
+
Buying from A-Z
+
Contact a specialist
+
Emil Nolde Biography
Share