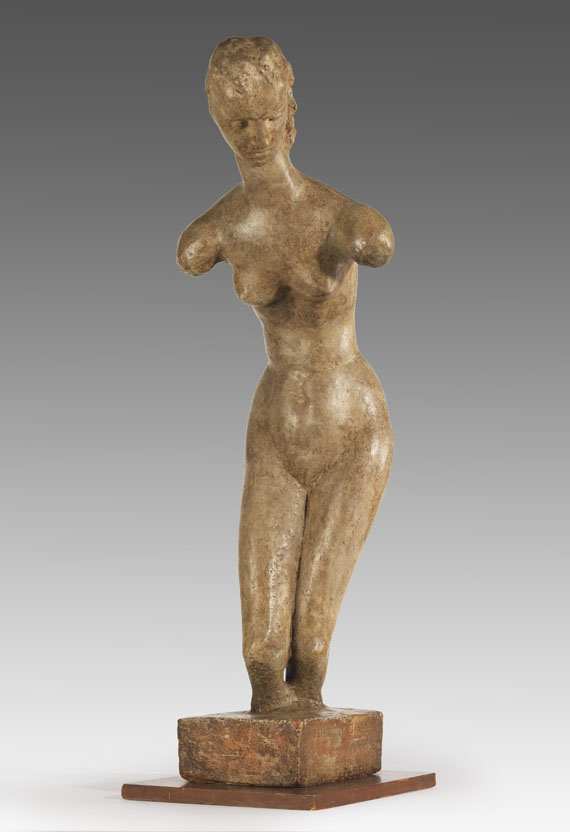 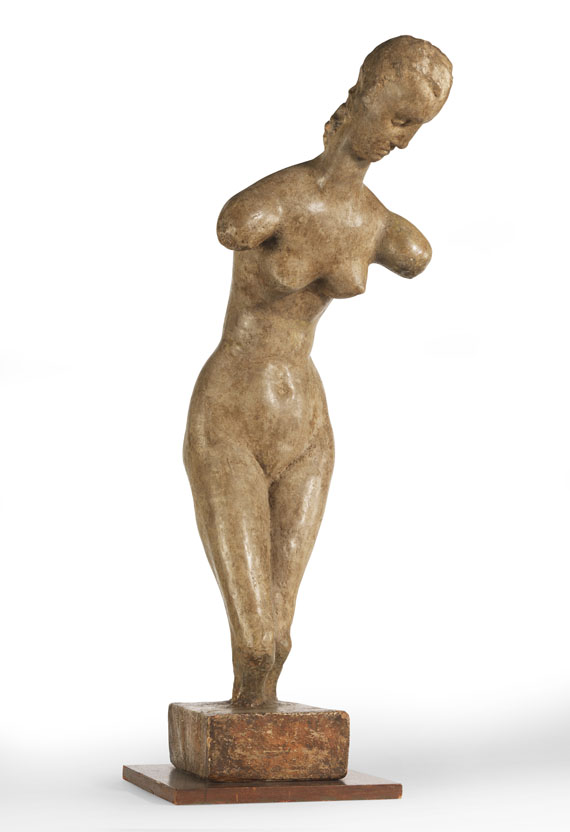 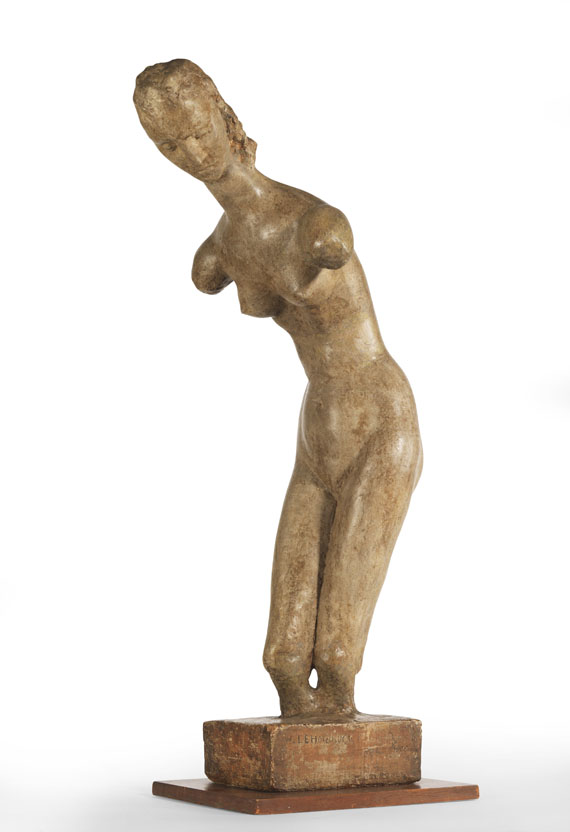 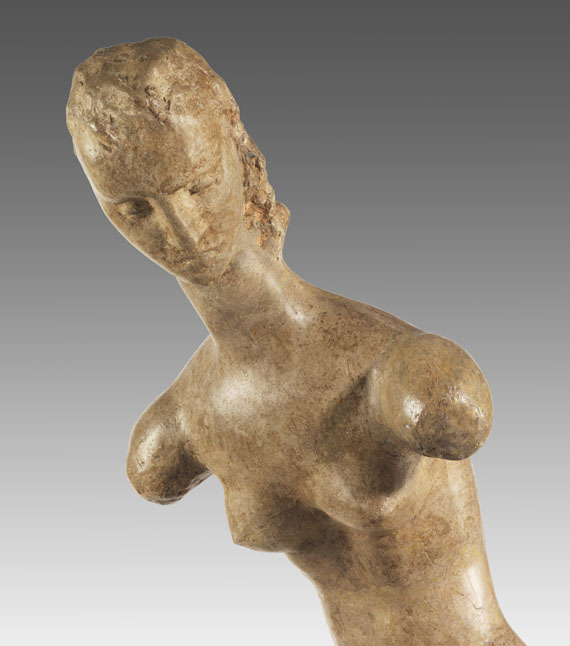 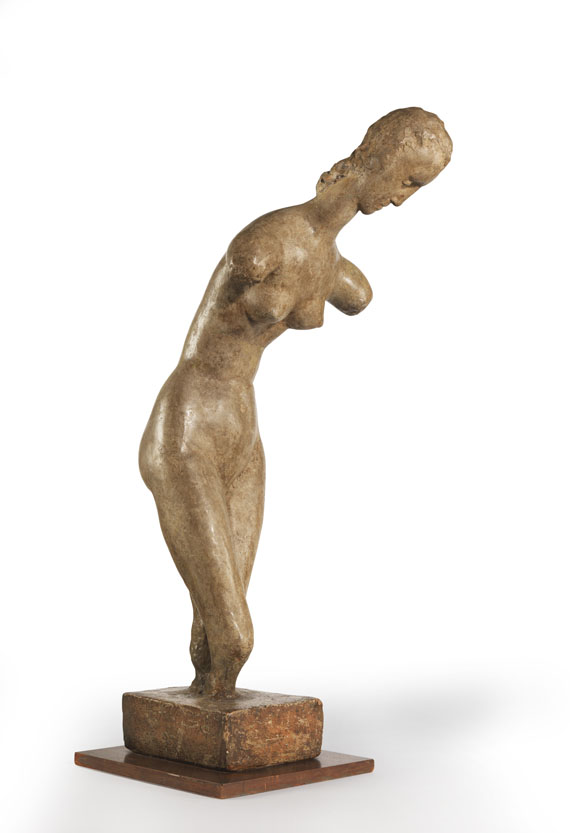 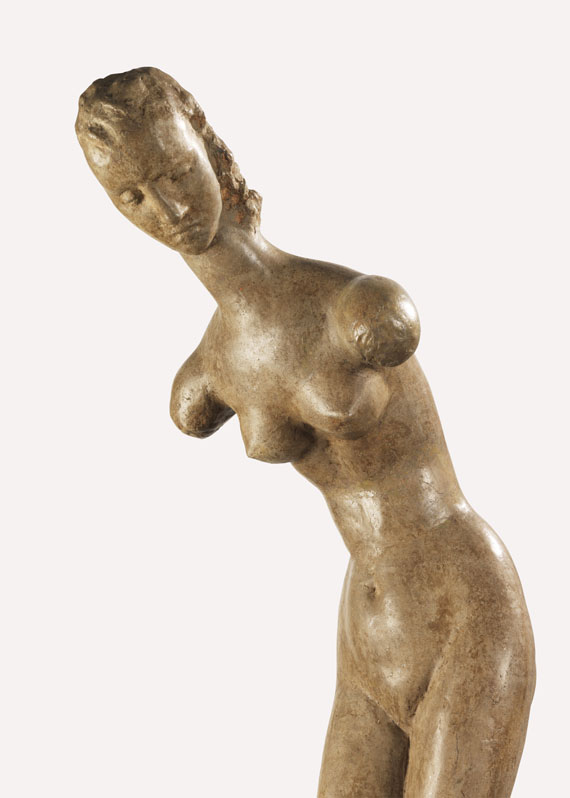 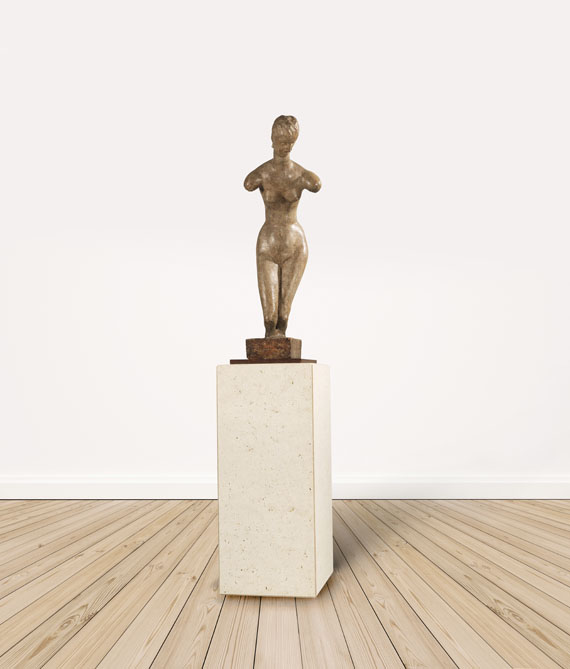 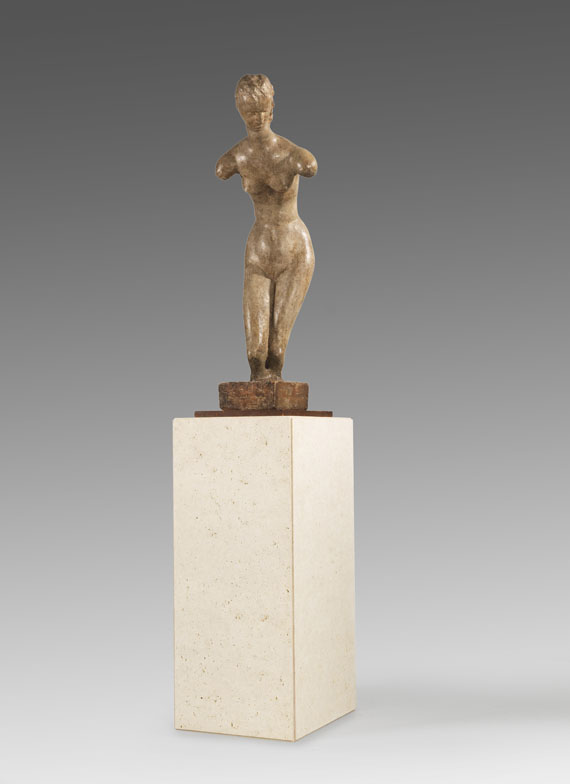 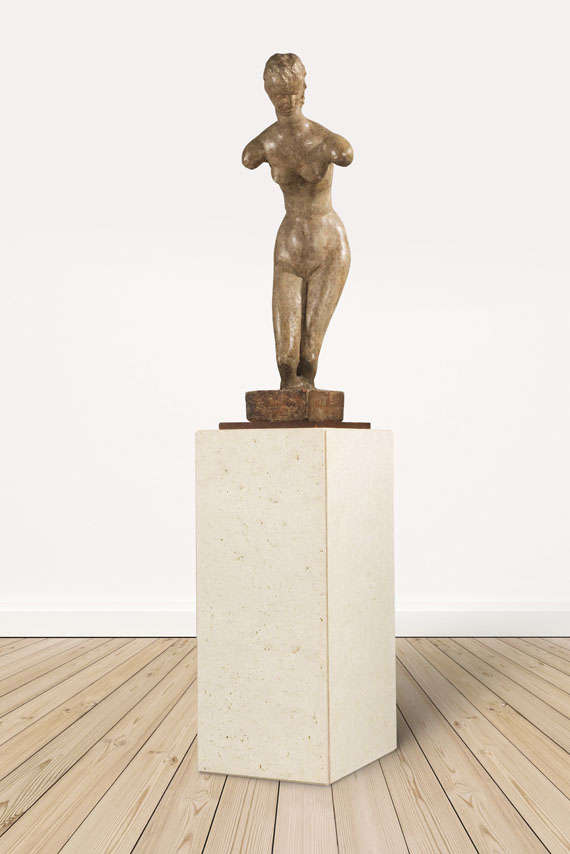 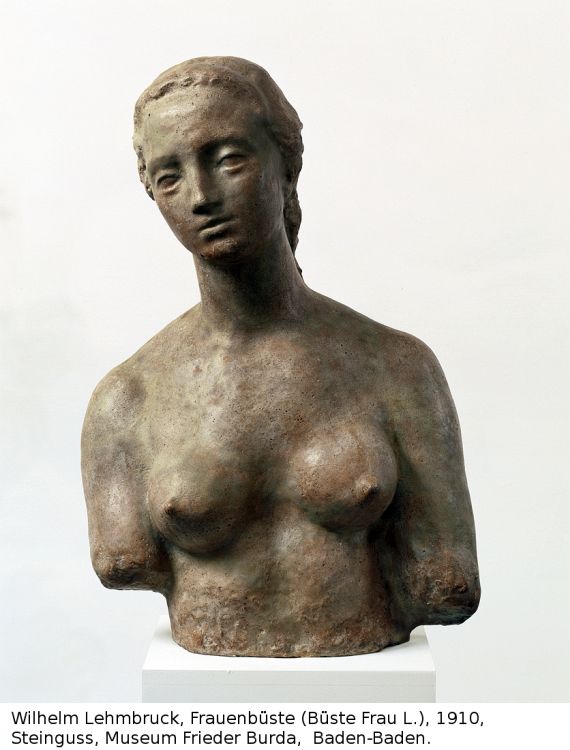 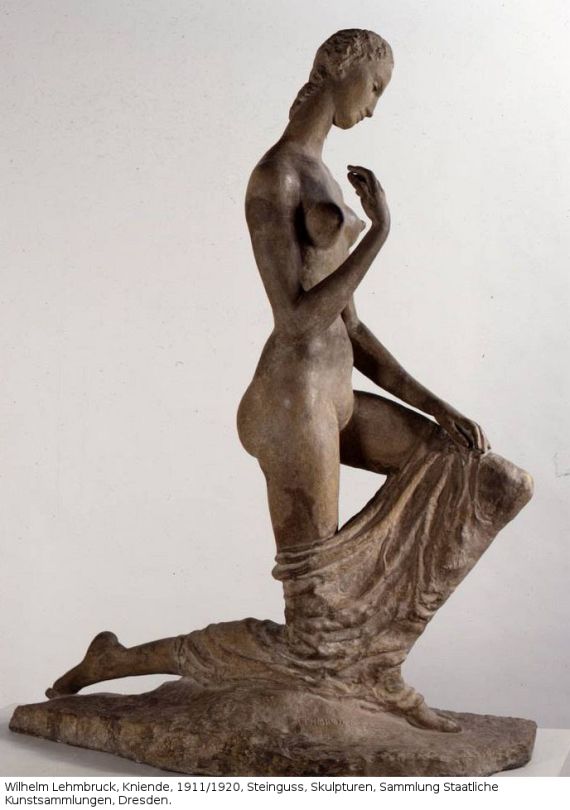 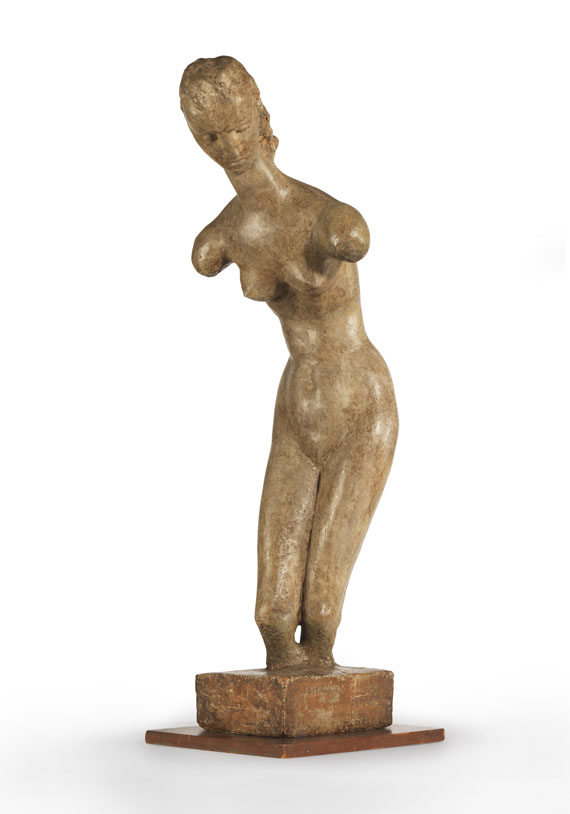 815
Wilhelm Lehmbruck
Gebeugter weiblicher Torso, 1912/13.
Cement cast, base partly with bronze patina. Mo...
Estimate:
€ 160,000 / $ 185,600
Sold:
€ 375,000 / $ 434.999
(incl. 25% surcharge)
Gebeugter weiblicher Torso. 1912/13.
Cement cast, base partly with bronze patina. Mounted on a wooden plate.
Schubert 78 A 4/5 (of 6), illu. 389. With the artist's name on one side of the plinth. One of to date only 6 known cement cast copies. Height: 90 cm (35.4 in), without base plate.
We commissioned a comprehensive material analysis as part of which material samples of our sculpture were compared with those of verified lifetime casts.
In total, all results the analysis produced regarding casting technique, material, version and condition speaks support the theory that this copy is an early cast from Lehmbruck‘s important creative period in Paris.
This work is one of the extremely rare cement casts of the "Gebeugten weiblichen Torsos", which is one of Lehmbruck's most famous expressionist works.
Even the Wilhelm Lehmbruck Museum in Duisburg owns just a posthumously executed bronze cast of this impressive figue. Only one stone cast is in possession of a public collection (Hirshhorn Mueum, Washington Schubert 78 3 (of 7).

We are grateful to Prof. Dr. Dietrich Schubert, Heidelberg University, for his kind expert advice.

When Lehmbruck went to Paris in 1910 he came in contact with Matisse, Archipenko, Brancusi and Modigliani, who would decisively influence his path to expressionist sculpting. While the first sculptures that came into existence in Paris still showed the heavy plastic volume of Maillol‘s works, a gradual detachment from the classic canon and a development towards a more dematerialized, expressive form can be observed in the following. His elongated facial forms and body shapes, of which our "Gebeugter weiblicher Torso" is a prime example, are considered his most typical and most impressive accomplishments up until today. By invitation of the ‘Deutscher Künstlerbund‘ (Association of German Artists), Lehmbruck showed his expressionist main works in cement cast, among them a "Gebeugter weiblicher Torso", in the annual exhibition at the ‘Städtische Kunsthalle Mannheim‘ in 1913. According to Schubert, his participation in this exhibition "doubtlessly shows that Lehmbruck did not conceive all his figures as bronze casts, instead he intended to use different materials as conveyors of expression for his figures. He showed particular preference for the fine cement cast (stone cast), after he had discussed its advantages with Julius Meier-Graefe in Paris as early as in 1911." (D. Schubert: Der Gebeugte weibliche Torso (1912), Bremen 2000, p.107). Schubert continues to explain that it is due to the stone cast‘s different tinges, from beige over ocher to red-brown, that every copy "was like a unique original work, which one can‘t say about the casts in bronze." (Quote from: Ibidem, note 2). This may have been the reason why Lehmbruck only had one single bronze version of the "Gebeugter weiblicher Torso" made during his lifetime, which, next to two terracotta heads, was shown at the Mannheim exhibition "Zeichnungen und Plastiken neuzeitlicher Bildhauer" in May 1914. Today it is part of a US private collection. All other bronze copies were cast posthumously by commission of either his widow or the estate after Lehmbruck had committed suicide at the end of World War I in Berlin in 1919. Only seven stone casts of the "Gebeugter weiblicher Torso" are known to date, one is part of the collection of the Hirshhorn Museum in Washington and at least two are in possession of private German collections. As the whereabouts of the other casts are unfortunately unknown, this cast, which comes from a private American collection, is an utterly pleasant and art-historically relevant rediscovery.
Another aspect worthwhile mentioning is the fact that this work here has a particularly exciting history, which includes a couple of famous names: The famous German-American art trader Curt Valentin included the work into his select range of offers. It was then acquired by Morton D. May, also known as "Buster", who wrote about the purchase in a letter to Valentin from January28,1955: "The sculpture arrived and I am most pleased with my purchase." (MOMA Archives, Valentin Collection, III. B. 8 "M"). The heir of the May Department Stores Company was well known for his collection of outstanding works of German Expressionism. Other previous owners were the acclaimed American interior designers William Kennedy and.
Owing to the new acquisition of the "Große Sinnende" (1913/14) in 2017, the Staatsgalerie Stuttgart will show a large Lehmbruck exhibition from September 28, 2018 to February 24, 2019, which will comprise both sculptures and graphic works. [JS/AT]
More Information
+
Sell
Get a free appraisal for a similar object!
+
Register for
Wilhelm Lehmbruck
+
Buying from A-Z
+
Contact a specialist
+
Wilhelm Lehmbruck Biography
Share