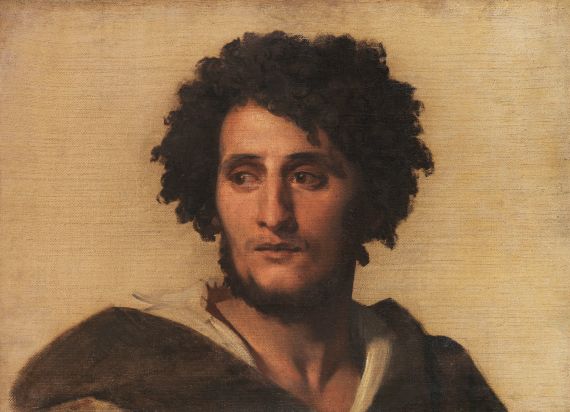 We are grateful to Mr Jürgen Ecker for his kind expert advice.

Our painting originates from the artist‘s first visit to Rome. It shows a young man with a head of dark and curly hair and a chin-beard, gently curved lips, striking nose and round, recessed eyes. The white shirt with open neckline shows a strong neck and muscular shoulders, which, just as it is the case with the background, have not been fully executed. This contributes to the almost sculptural effect of the finely modeled study head in subtle manner. Rendering figures in oil sketches was characteristic of Feuerbach in those days. A work from the late 1860s also seems to show the same young man in half length portrait (cf. Ecker 455). This young man depicted here seems to have sat model for several acclaimed artists in the 1850s. Edgar Degas captured the model in several character head studies between 1856 and1858 (cf. Atelier Edgar Degas 1919, p. 89, 94. a-c). A portrait attributed to Jean-Léon Gérome shows the same head, too (cf. Sotheby's, New York, February 1,2018, lot 717). In a portrait made by the Cologne painter Johannes Niessen from 1847, which also seems to show the same young man, he is named Giacomo Orlandi di Subiaco. The small community Subiaco is located around 70 kilometers east of Rome. The characterful facial features, the suntanned complexion and the strong body make the young man the ideal type of the young Roman man: His body has been strengthened by physical labor while his mind has been skilled by the Eternal City‘s art treasures. Even Caravaggio sought this unusual combination for his paintings and found the best models in the streets of Rome.
More Information
+
Sell
Get a free appraisal for a similar object!
+
Register for
Anselm Feuerbach
+
Buying from A-Z
+
Contact a specialist
Share