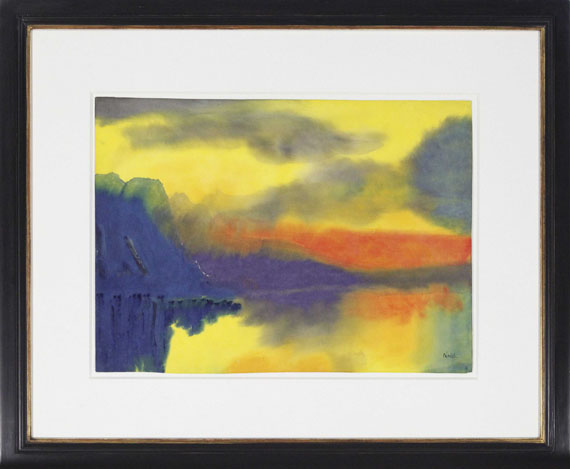 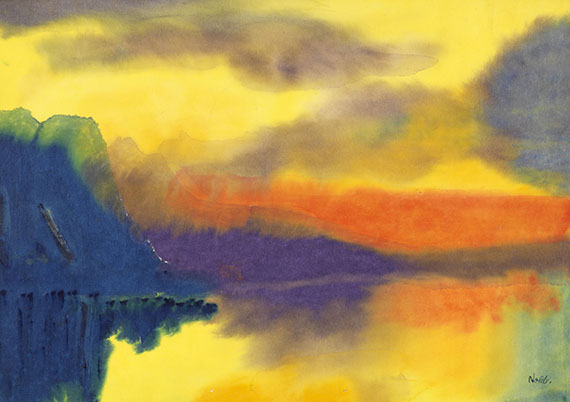 Accompanied by a confirmation from the Ada and Emil Nolde Foundation, Seebüll, from April 10, 2018. The work is registered in the foundations's archive.

The rare mountain landscapes are charming counterpieces to the scant landscape depictions of his homeland East Frisia. Time and again Nolde visted the Swiss mountains for health reasons. Most his mountain watercolors were made plein-air right in front of the motif, showing the impressive settings that Nolde captured on paper in his accustomed lush manner. The region also offered him the wide skies and dramatic plays of colors that inspired him to so many watercolors. In 1910 Nolde had already gained experience in his "wet-in-wet" technique on Japon, over the time he reached such mastery that it would eventually become his trademark. A thin film of water in combination with the watercolor leads to the the blue streaks that deliver such a poetic account of the crytsal-clear surface of the mountain lake. The color clouds of the setting sun are mirrored on the peaceful and calm surface of the water. The impressive sky remains the composition's main protagonist, an exhilarating moment, captured in an ocean of colors. [SM]
More Information
+
Sell
Get a free appraisal for a similar object!
+
Register for
Emil Nolde
+
Buying from A-Z
+
Contact a specialist
+
Emil Nolde Biography
Share