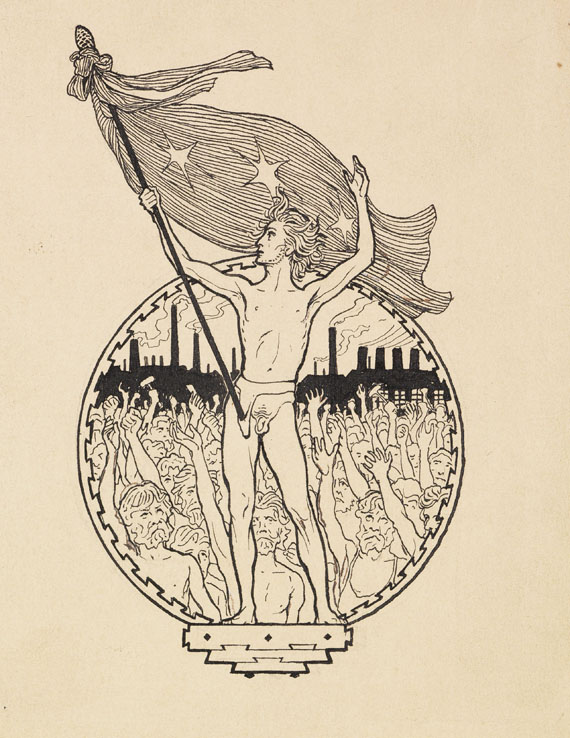 Fidus, actually Hugo Höppener, was born son of a confectioner in Lübeck. He began to study at the Munich Academy in 1887, the year he also met Karl Wilhelm Diefenbach, who was at that point living in isolation in Höllriegelskreuth near Munich. He was a student of the painter and proponent of the “Lebesnreform“ (Life Reform) movement until 1889 and also got his pseudonym from him. During these days he also participated in Diefenbach‘s 68 meter long relief "Per aspera ad astra". From 1889 to1892 Fidus studied under Nikolaus Gysis in Munich before he transferred to Berlin. In the following he went on numerous journeys, among others to Norway, Switzerland, Italy and Istria, and became active for the Munich based magazines "Jugend" and "Simplicissimus". He had his first exhibition at Gurlitt in Berlin in 1898. The artist‘s oeuvre is doubtlessly based on a certain liking for ideas of Romanticism, while the execution is fully in line with Art Nouveau. This becomes particularly obvious in the line management of these draft drawings for Karl Henckell‘s publications with motifs of beautiful young female and male bodies. Their nudity coupled with transcending symbols like sun and moon or various ancient hand weapons allow associations with the world of Greek or Nordic Mythology. Correspondence shows that Henckell and Fidus were not only businesspartners but also close friends. Additionally, Henckell‘s hand-written owner's marks on some of the drawings deliver proof of his special appreciation for these illustrations.[FS]
More Information
+
Sell
Get a free appraisal for a similar object!
+
Register for
(d. i. Hugo Höppener) Fidus
+
Buying from A-Z
+
Contact a specialist
Share