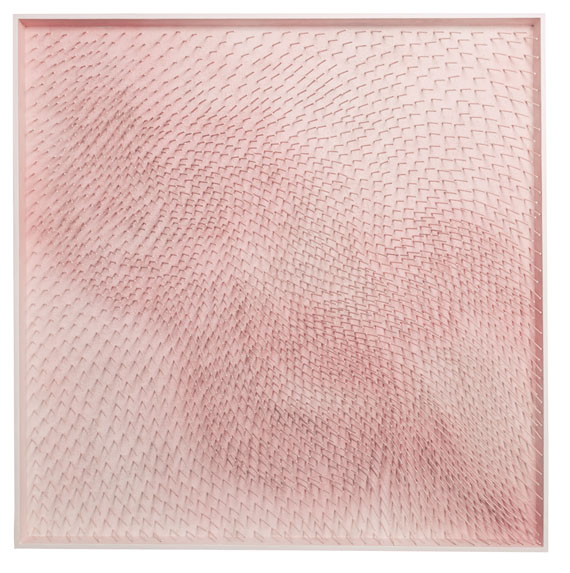 The year 1964 saw Günther Uecker's international breakthrough, other works from the same years are in possession of the MOMA and the Nelson Rockefeller Collection, formerly Collection Frank Sinatra..

This work is registered in the Uecker Archive with the number GU.64.005 and will be included into the forthcoming Uecker catalog raisonneé.

"I have never regarded myself as an aggressor. The aggression I am imputed to does not exist. It is tenderness with a certain impertinence, a kind of intrusiveness. This tenderness is a longing for love."
Günther Uecker, quote after: www.ndr.de/kultur/geschichte/koepfe/Guenther-Uecker-Viele-Naegel-grosse-Kunst.
"The field's motion
The shimmering light
The wind on the water
Language of the dissolving signs of beauty
Hovering clouds
The white beach
Where the visible, crowned by light, goes lost in the invisible"
(Günter Uecker, 1964)

“Zärtlicher Garten“ (Gentle Garden) is one of Günther Uecker‘s sought-after early nail fields. It was made in 1964, the year Uecker showed works at not less than nine ZERO exhibitions, among them the legendary show at Howard Wise in New York, which meant the international breakthrough for the 34 year old artist. Works that came int existence the same year as our "Zärtliche Garten" can be found in acclaimed collections, a white field is in possession of the Museum of Modern Art, New York, the work "Heart" is part of the Nelson Rockefeller Collection, formerly Collection Frank Sinatra. It was during this important turning point in his artistic development that Uecker discovered the organic as theme for his nail fields. This revolutionary change can be best understood when comparing “Zärtlicher Garten“ with one of his mathematically conceived rows of nails, which follow a strictly geometrical concept and in which abstraction is the prevailing expressive means. This is entirely different in “Zärtlicher Garten“: A gentle wave arouses the nails and breathes mysterious life into them. Instead of the non-color white, the field and the nails are embraced by a soft rose – a rare example of colorism of the early Uecker, which subtly underlines his turn to the “organic nail field“. Dieter Honisch wrote about this development: “The nail fields, which the artist continued to make, seem to have more dynamics and motion than it was the case with earlier works. […] These moved fields, heavier in terms of material but lighter from an aesthetic perspective, are the most virtuous accomplishments in Uecker‘s creation.“ Dieter Honisch, Günther Uecker, Stuttgart 1983, p. 93. A suggestive cycle - Five organically inspired nail fields in same format were made in 1964: “Zärtlicher Garten“, “Porträt Bettina“, “Weißer Vogel“ (White Bird), “Weiße Flut“ (White Flood ) and “Haar der Nymphen (für Beatrice)“ (The Nymphs‘ Hair). These works also form a group in terms of their content. Life‘s organic copiousness merges with associative potential and is fed by strong titles. Do the female names refer to living people or have “Beatrice“ (Dante‘s beloved ) and “Bettina“ (von Arnim, deeply in love with Goethe) long become synonyms for a romantic love? Is it a dove we see in “Weißer Vogel“ or even a phallic symbol in “Weiße Flut“? The title he chose for our work “Zärtlicher Garten“ turns out to be extremely suggestive: the late medieval tradition of performing minne songs in gardens is widely known - and it does not require much imagination to discover two bodies approaching one another with their arms wide open. Is this unusual cycle about love in the end? It would not be a typical Uecker if there was a clear answer. Despite their rich associations, his works always remain enigmatic – just like the artist himslef does. Gelsenkirchen Avant-garde It is little surprising to find an unusual work in possession of an unusual collector. “Zärtlicher Garten“ was acquired by Ernst Otto Glasmeier in the late 1960s. A man known as one of the most progressive architects of his days. Along with several friends, Glasmeier was at the center of an avant-garde art scene in which ZERO found its spiritual home. What is so unique about it is the fact that it was not in a metropolis where the great minds congregated, but in the town of Gelsenkirchen, deep in the heart of the Western German coal belt. Uecker, Mack and Piene did not want to make posh Düsseldorf home of their “ZERO-Museum“, so they chose Gelsenkirchen, where they mounted the legendary exhibtion “Zero in Gelsenkirchen“ (1963) and Uecker‘s piano nailing at “Pianohaus Kohl“. The opinion of the art critic and contemporary witness Heiner Stachelhaus puts it in a nutshell: “The art of the 1960s in Gelsenkirchen – that was, looking back at it, a crazy thing. Something phenomenal was happening“. Quote from Burkhard Leismann (editor), Industrial land art im Ruhrland, Essen 2009, p. 46
More Information
+
Sell
Get a free appraisal for a similar object!
+
Register for
Günther Uecker
+
Buying from A-Z
+
Contact a specialist
+
Günther Uecker Biography
Share