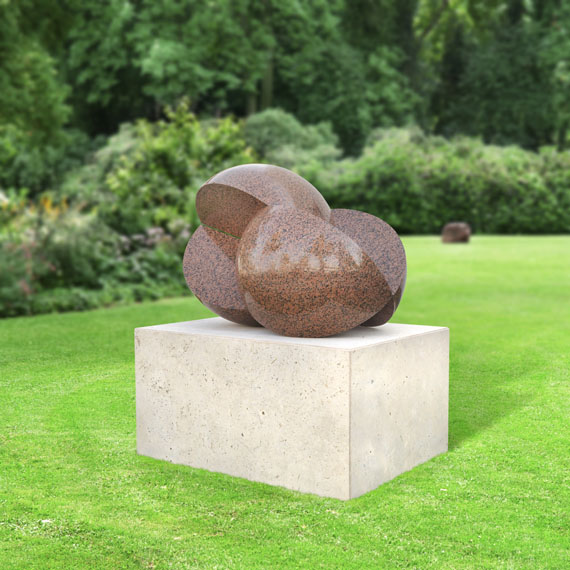 enlarge image
+
869
Max Bill
strebende kräfte einer kugel, 1985/86.
Stone. Swedish Bohus granite
Estimate:
€ 250,000 / $ 250,000
Sold:
€ 300,000 / $ 300.000
(incl. 25% surcharge)
strebende kräfte einer kugel. 1985/67.
Stone. Swedish Bohus granite.
Unique object. 75 x 110 x 75 cm (29.5 x 43.3 x 29.5 in).
This sculpture was completed in 1985/86.
According to the max, binia + jakob bill foundation, four more versions in different dimensions and of other materials are known: A large version made of rose Porino granite is at the artist's residence and studio in Zumikon, Switzerland. A lighter version of Sardinian granite is part of the permanent exhibition of the Kunstmuseum Liechtenstein, Vaduz. A slightly smaller version of black granite is in possession of the Daimler Art Collection and another smaller version belongs to Dr. Jakob Bill, the artist's son, and will be mounted at the "Giardino Max Bill", Casorella in Locarno, in the near future.

This work "strebende kräfte einer kugel" is a striking visualization of Bill’s programmatic concept. Bill does entirely without referencing the visible, figurative world for the benefit of a strictly geometrical exactness and uses only the globe’s basic form which he makes subject to the mathematical method of parallel translation. The globe is quartered along its center axle, before two exactly opposing quarters are shifted in the same direction at constant angles and lengths by half the globe’s diameter. Now that the inside of the previously intact globe is visible, additional even surfaces come into existence. The work is an expression of a harmonious composition of form, color and material in combination with "accurateness and distinctiveness of a mathematical-physical theorem", which Max Planck (1858-1947) once praised as the "highest wisdom" (W. Grohmann, in: Max Bill. Malerei und Plastik 1928-1968, Kunsthalle Düsseldorf 1968). Max Bill phrased the idea implemented here, creating an artwork from a mathematical principle, in the essay "The Visual Mind: Art and Mathematics" from 1949. It is one of the key principles of his concept of art. "strebende kräfte einer kugel" inspires the observer to remeasure, compare and recalculate and gives away the secret of its construction and its aesthetic value only after a thorough three-dimensional inspection. With the exceptional quality of the around 920 million years old Swedish Bogus Granite, the work offered here delivers proof of the possibility of combining mathematical-geometrical strictness and a beauty of form and color. This is the only known version of "strebende kräfte einer kugel" made of this material. The architect Prof. Erwin Heinle (1917-2002), Stuttgart, received the work as present from his long-term business partner Prof. Robert Wischer (1930-2007) on occasion of his 70th birthday in 1987. For years the sculpture was placed between the neighboring houses of the two architects, who achieved their good reputation with projects like the Olympic Village in Munich or the TV towers in Stuttgart, Nuremberg and Cologne. [CH]
More Information
+
Sell
Get a free appraisal for a similar object!
+
Register for
Max Bill
+
Buying from A-Z
+
Contact a specialist
+
Max Bill Biography
Share