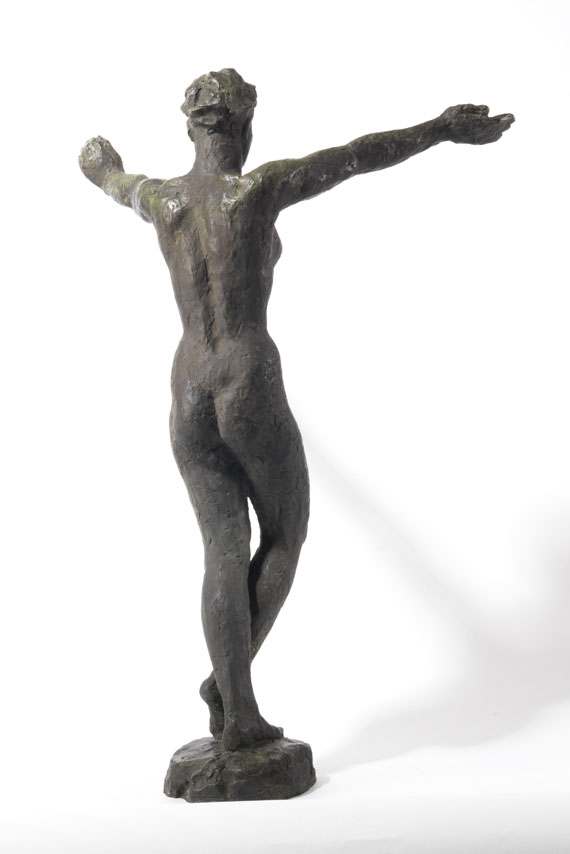 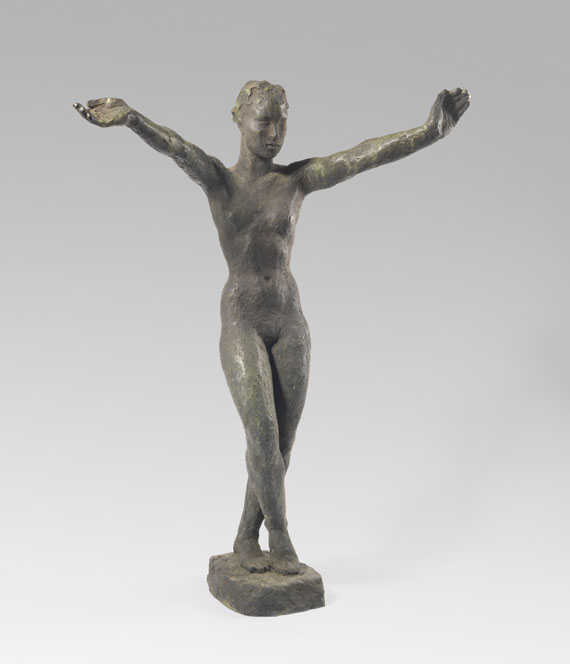 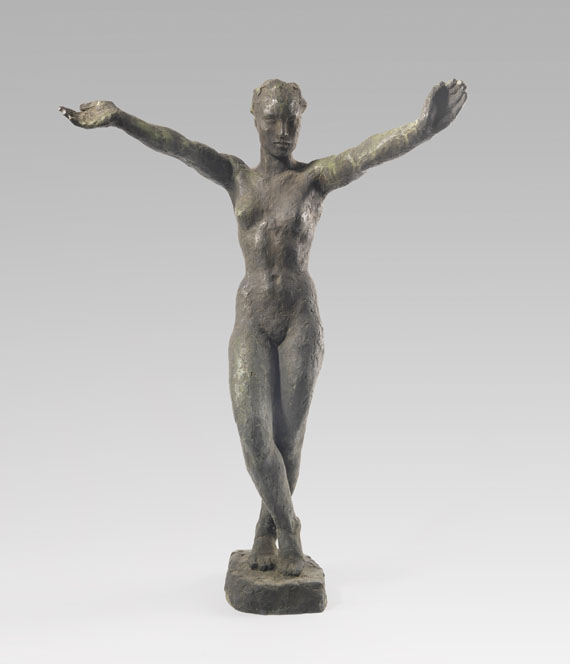 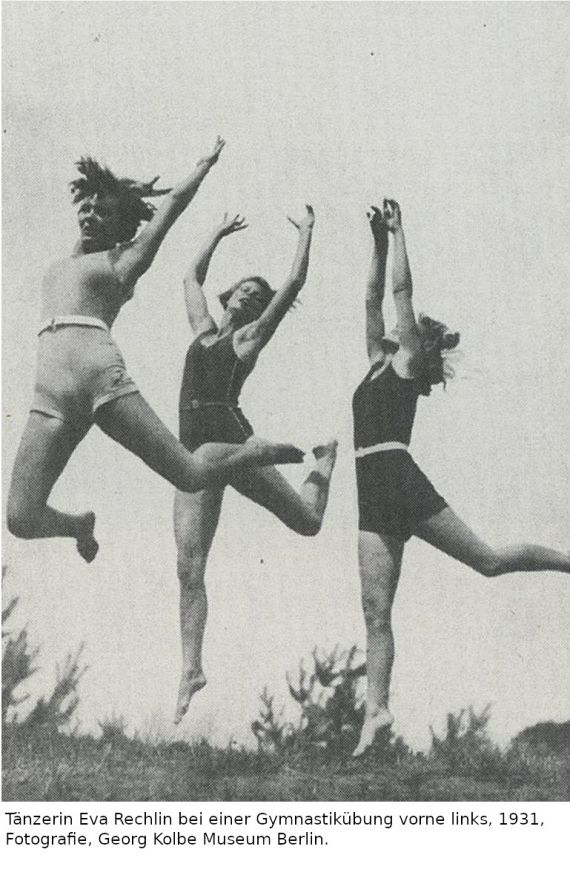 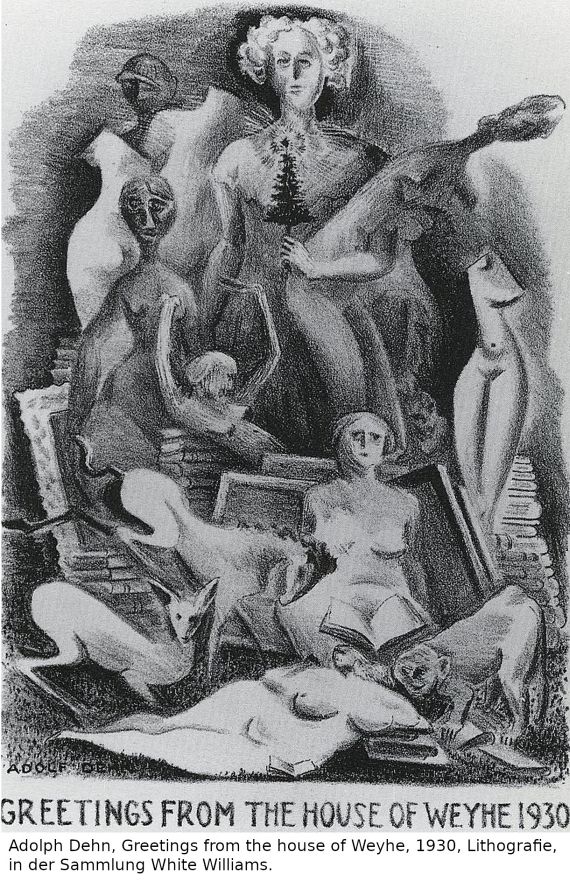 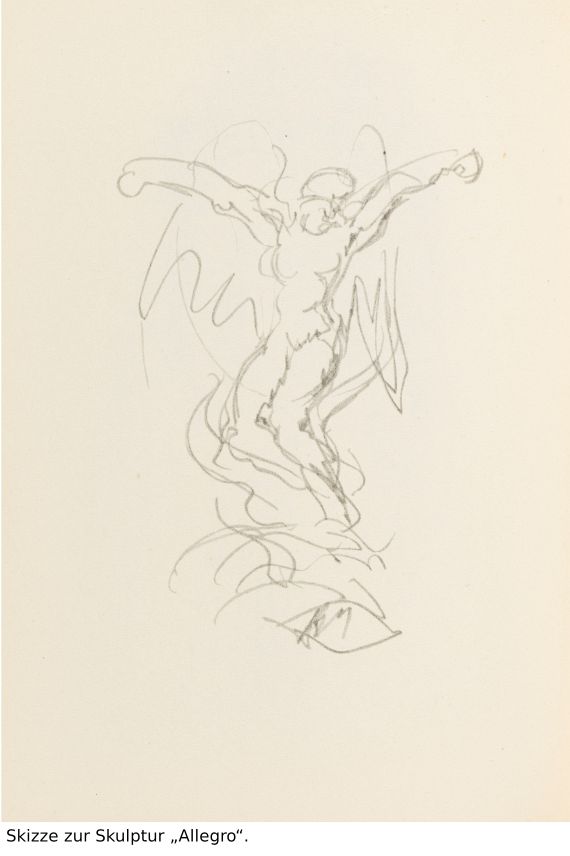 90
Georg Kolbe
Allegro, 1929.
Bronze with brown-green patina
Estimate:
€ 80,000 / $ 92,800
Sold:
€ 79,651 / $ 92.395
(incl. 25% surcharge)
Allegro. 1929.
Bronze with brown-green patina.
Not in Berger. Base with monogram, foundry mark "H.Noack Berlin Friedenau" and inscription "I". One of 8 lifetime casts from 1929. (According to preserved invoices, a total of just two more casts were made in 1967 and in 1974). Height: 71.3 cm (28 in).
Cast by the art foundry Hermann Noack, Berlin. According to Dr. Ursel Berger, only casts intended for export to the USA were numbered "1" and "2", in rare cases also "3" (alternatively "I", "II", "III"), as lower import taxes were levied on the first casts; however, the numbering usually does not indicate the order the casts were made in.
The dancer Eva Rechlin posed for Kolbe for this bronze. Rechlin, who was a great admirer of Kolbe's work posed for several of his works. She kept in touch with the artist even after her emigration to Moscow.
• Lifetime cast.
• One of the first casts of this figure.
• The dancer Eva Rechlin acted as model for this sculpture.
• "Allegro" counts among the deeply emotional female nudes from the late 1920s
• Another cast is in, among others, the acclaimed Kemper Art Museum in St. Louis, USA
• Used by Galerie Weyhe as motif for a Christmas card in 1930.

With an expertise from Dr. Ursel Berger, Berlin, from February 1, 2019.

PROVENANCE: Collection Erhard Weyhe, New York.
(at least two copies acquired directly from the the artist presumably in 1929 or 1930, in 1930 the work was used for a Christmas card of Galerie Weyhe. Weyhe was a book and art trader of German descent who established mainly French and German sculpting on the American market in the second half of the 1920s and the early 1930s. He was in close contact with Kolbe)
Private collection USA (inherited from aforementioned) .

Georg Kolbe made the sculpture "Allegro", a stunning masterpiece characterized by eccentric-extensive motion gestures, two years after his year of destiny 1927. That year Kolbe did not only become Germany’s most successful sculptor, he also suffered a private tragedy that would change his entire life: In February1927 Benjamine Kolbe, the artist’s wife, put an end to a life affected by melancholia and depression at the age of 46, just a few days before their 25th wedding day. In retrospect the artist noted: "1927 was a fateful year for me. I lost my companion in life! She is irreplaceable and my bliss has been destroyed." (Quote from: Berger, p. 88). In the aftermath of this stroke of fate Kolbe’s sculptural creation also underwent significant change, as he put increased focus on pensive and mourning female figures, such as the "Niedersinkende" (cf. Berger 111), the "Niedergebeugte" (cf. Berger 138) or "Pietà" (cf. Berger 120)."Allegro" (Italian for quick, cheerful, jaunty), however, is a first document of Kolbe’s attempt to overcome the introversion of previous works. The chosen motif of a "merry" dance in combination with an extensive gesture delivers proof thereof, while the wide open arms, on the one hand,evoke associations with the Christiangesture of benediction and the musical motif, on the other, references Benjamine, whose lifelong passion was music. She met Kolbe when she was studying singing in Bayreuth, where she also was a regular visitor of the opera.All in all, she contributed a musical spirit to their life and home. With the eccentric gestures and the work’s title, the tempo indication "Allegro", Kolbe made a strong effort to tie in with thelust for life and the musicality typical of the sculptures made when Benjamine was still with him: Accordingly, the bronze figure"Allegro", of which only eight copies were cast during the artist’s lifetime, can be considered a remarkable document of Kolbe’s artistic approach to coming to terms with his fateful past. [JS]
More Information
+
Sell
Get a free appraisal for a similar object!
+
Register for
Georg Kolbe
+
Buying from A-Z
+
Contact a specialist
+
Georg Kolbe Biography
Share