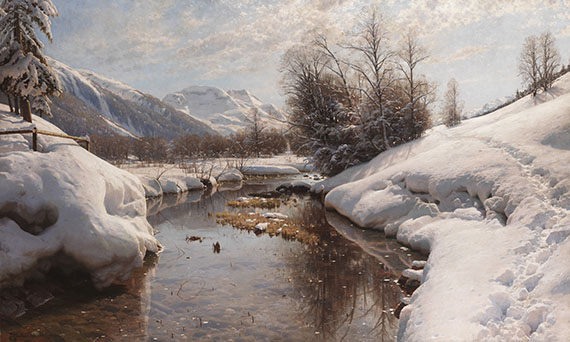 Essay
In addition to numerous summer landscapes, Mönsted's oeuvre also comprises large-sizesnow scapes with almost photo-realistic effects in which the reflecting surface of the water is the main eye-catching feature. With the deceptively reproduced reflections, Mönsted proves his true artistic ability. The painting offered here shows a snowy landscape in the Engadin, a high valley in the Swiss canton of Graubünden, which gained in popularity in context of the emergence of alpine tourism and associated bathing cures since the 1850s. The deep softness of the snow, the crystal clear waters of the river, and the high mountain peaks encompassing the valley add a high degree of immediacy to the view, an effect that is increased by a light atmosphere capturing the very moment. The first snowscapes in Mönsted’s oeuvre were created before the turn of the century and in the following decade, it reached its peak of importance after the First World War. In addition to the Engadine, Mönsted found further inspiration for these pictures around the Norwegian town of Lillehammer as well as in his home country Denmark. When Mönsted was particularly satisfied with a composition, he would make several versions of it. Every picture captivates with its unique blend of a notion of supernatural ideality and the momentary impression of nature. It is not the dramatically enraged nature or an unreal Arcadia that Mönsted shows us in his pictures, it rather is a well-chosen landscape characterized by an atmospheric naturalness. The image of nature serves the observer as a refuge of recreation and invites him to spiritual hike - an aspect that is subtly hinted at in our work by the freshly plowed path leading right into the picture.
More Information
+
Sell
Would you like to sell a similar object?
+
Register for
Peder (Peder Mørk Mønsted) Mönsted
+
Buying from A-Z
+
Contact a specialist
Share 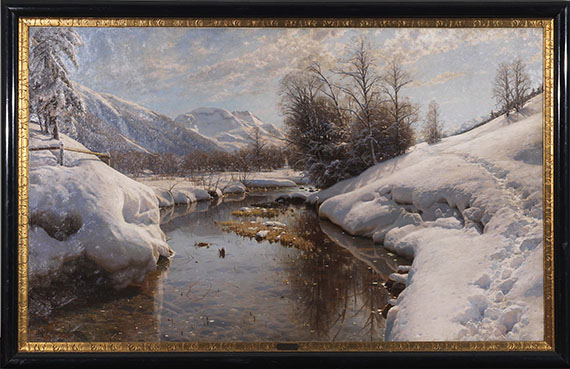