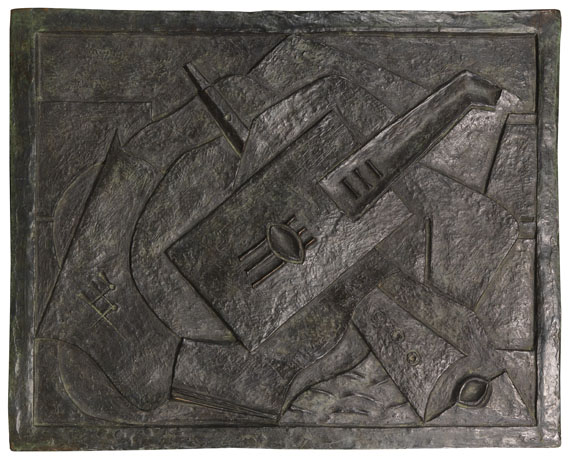 enlarge image
+
421
Jacques Lipchitz
Nature morte aux instruments de musique, 1918/19.
Bronze relief with greenish brown patina
Estimate:
€ 40,000 - 60,000
$ 45,600 - 68,400
Lot description
Nature morte aux instruments de musique. 1918/19.
Bronze relief with greenish brown patina.
Cf. Wilkinson 76. With the artist's monogram in lower left and with the artist's thumprint on the side. From an edition of 9 known copies. Each copy is based on an individually made wax model. 55.8 x 70.3 x 3 cm (21.9 x 27.6 x 1.1 in).
This is a lifetime cast, presumably made by Modern Art Foundry, New York in the 1960s. Other copies of this work are at, among others, the Kunstmuseum Basel and the Museum Boijmans van Beuningen in Rotterd (plaster at Kröller-Müller-Museum, Otterlo, stone relief at Sprengel Museum, Hanover).
• Lifetime cast
• Other copies can be found in notable European museums
• The exchange with the Cubists Georges Braque and Pablo Picasso led to drawings, gouaches and first polychrome stone reliefs in which Lipchitz sought to transfer pictorial principles to three-dimensionality.
Accompanied by an expertise issued by Prof. Dr. Kosme de Barañano, Valencia, who eyed the original work. Prof. Dr. Kosme de Barañano is the author of many publications and curator of Jacques Lipchitz exhibitions and retrospectives (latest "Jacques Lipchitz 1891-1973. A Retrospective", Museum of Modern Art, Moscow 2018/19, and "Jacques Lipchitz: The Paris Years", Marlborough Gallery, New York 2019).

Essay
Jacques Lipchitz did not see painting as his mission, as he expressed in an interview with the curator Katharine Kuh in November 1957: "I have no talent whatsoever for this medium." (quote after: Robin Cembalest, The Optimist Cubist, in: Art News from May 1, 2002). Instead he discovered a great talent and love for sculpting. "Sculpture is a man-made companion with an immortal human heart inside from which calls are emitted constantly, giving us joy, warming us and teaching us, all at the same time." (Jacques Lipchitz in a letter to Otto Gerson, November 1957). When Jacques Lipchitz met the Spanish painter Juan Gris (1887-1927) in 1916 a lifelong friendship began. During World War I both artists left Paris for a longer time. In 1918 they, along with their families and several other artists, chose Beaulieu-lès-Loches as their refuge where they would spent the spring and summer months. Lipchitz and Gris were in a very fruitful artistic interchange, they discussed issues of sculpting, Lipchitz’ preferred form of artistic expression, in context of the creative aims and principles of Cubism, which Lipchitz did not only regard as a modern art tendency but as an entirely new view of the universe. It was during those years that he created masterly sculptures in the sense of Cubism. Both were on a quest to overcome the restrictions of conservative academic art. At that point Lipchitz was occupied with a number of drawings and gouaches in preparation of sculptural works, which he eventually realized after the end of the war when he returned to Paris in 1919. A. M. Hammacher, art historian and author of the monograph "Jacques Lipchitz. His Sculpture" attested this work offered here a key art-historically importance, as it reflects the aesthetic principles of both Jacques Lipchitz and his fellow artist Juan Gris like no other work in his oeuvre. A few months after it had been completed Lipchitz had his first solo show at Galerie Léonce Rosenberg in Paris. Today Lipchitz is regarded one of the 20th Century's greatest sculptors, his works can be found in notable collections like the Museum of Modern Art in New York, the National Gallery of Art in Washington D. C., the Tate Gallery, London, the Musée des Beaux-Arts in Nancy, the Sprengel Museums, Hannover or the Museum Folkwang in Essen. [CH]
More Information
+
Sell
Would you like to sell a similar object?
+
Register for
Jacques Lipchitz
+
Preview & Auction Procedure
+
Bidding Options
+
Bid by telephon / written
+
Buying from A-Z
+
Catalogue Order
+
Contact a specialist
+
Jacques Lipchitz Biography
Share 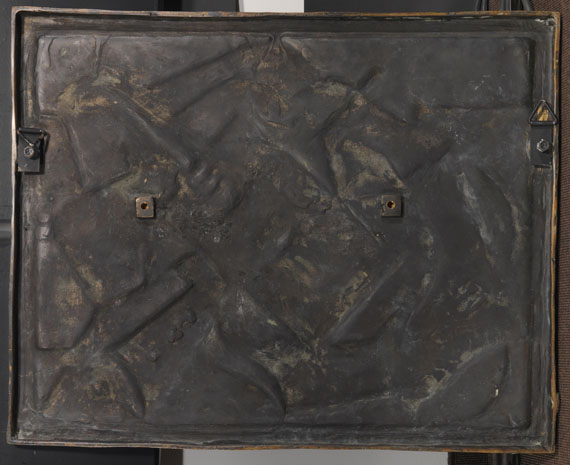 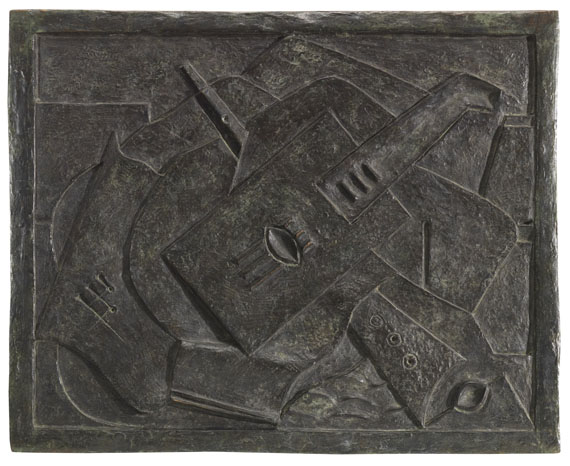 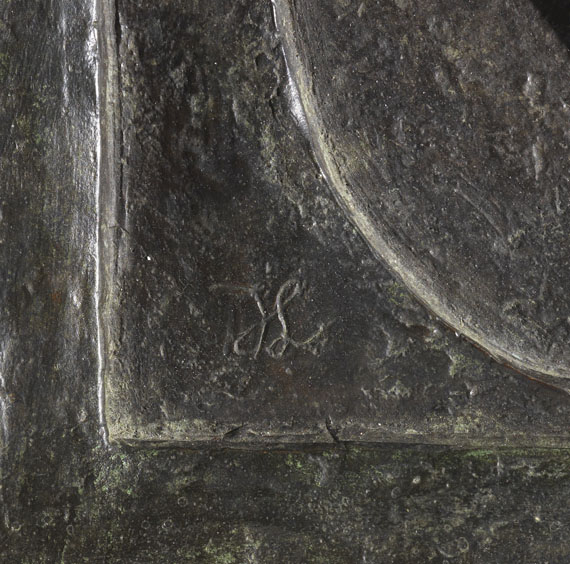 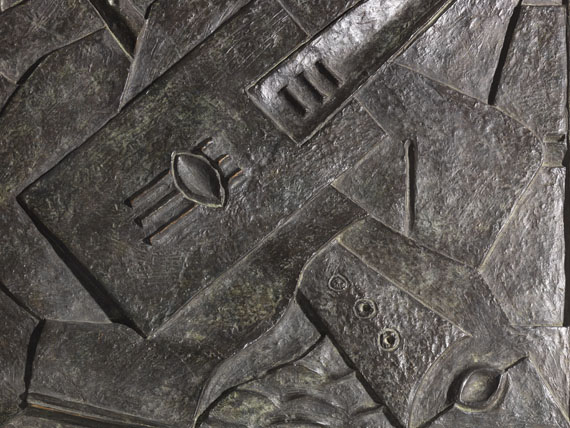 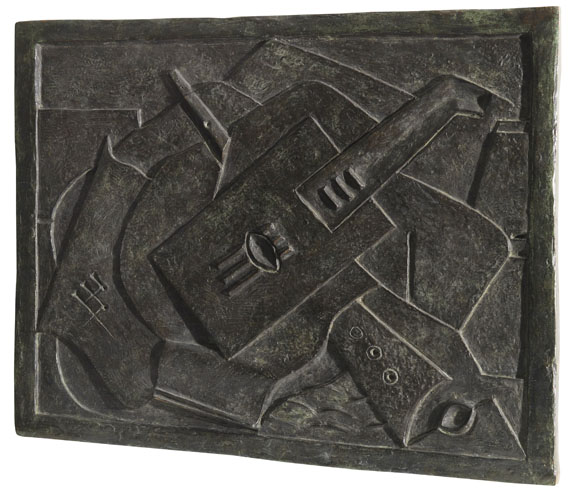 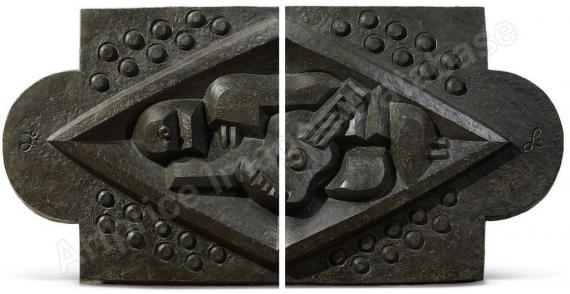 JACQUES LIPCHITZ
Homme allongé à la...
Sold: € 136,237
You might also be interested in
+
and all other offers
Buyer's premium, taxation and resale right apportionment for Jacques Lipchitz "Nature morte aux instruments de musique"
This lot can be purchased subject to differential or regular taxation.