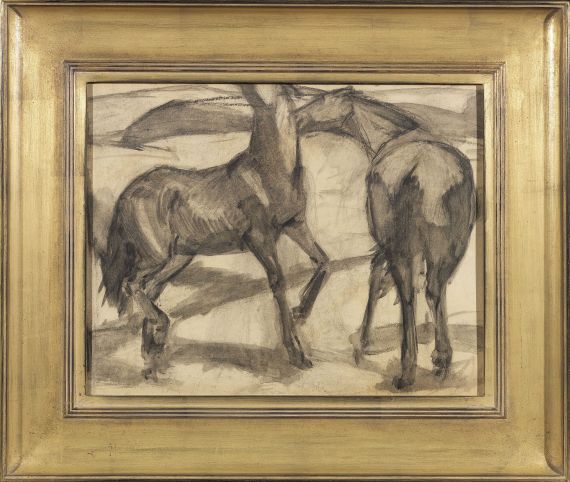 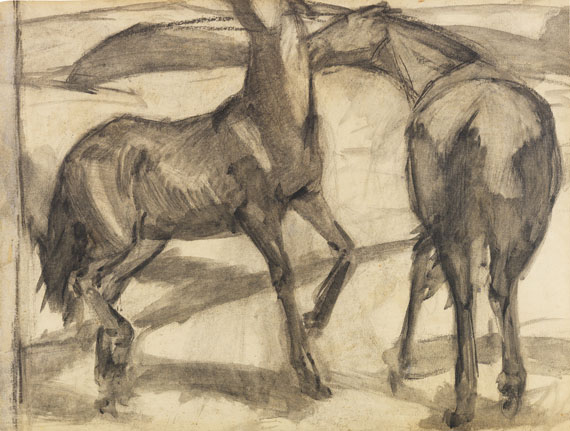 Born in Munich in 1880, Franz Marc began to study theology and philosophy at Munich University in 1899. In 1900 Marc switched to the Munich Art Academy, where his teachers were Gabriel von Hackl and Wilhelm von Diez. During a trip to Paris in 1903, Franz Marc was particularly taken with Impressionist painting. After this trip Marc dropped out of the academy and worked in Munich for some years. In 1907 Marc married the painter Maria Schür, mother of a child born outside marriage, but by 1908 the marriage ended in divorce and Marc soon met Maria Franck and married her in 1913. Influenced by van Gogh's work, Marc became interested in the inner being of the animals which would be his favorite motifs. With the support of his patron Bernhard Koehler, Marc's first exhibition took place at Brakl's modern art gallery in 1910. However, that year would be of key significance for the artist’s development for yet another reason.
In 1910 Franz Marc pursued an entirely new concept of form and color that enabled him to create his iconic expressionistic masterpieces.
The starting point of this development lies in Franz Marc’s singular understanding of nature, in particularly in his view of animals. He was on the quest to grasp the animals’ perception of nature: ”Our convention of placing animals in landscapes just due to our perceptional habits ask for it is poor and soulless. Why don’t we try to get into their soul in order feel their pictorial value?“ Franz Marc chose horses as central motif for the implementation of these ideas. Our work 'Zwei Pferde' shows this newly acquired rhythmical realization of the animal figures which found its climax in the painting 'Turm der Blauen Pferde' (The Tower of the Blue Horses', illust. 1) from 1913. The present drawing already reflects the compositional idea that Franz Marc phrased in a letter to Reinhard Piper: ”..The blood that circulates through the two horse bodies is expressed through manifold parallelisms and the vibrating lines. The observer should not even consider asking what kind of breed they are, instead I want him to sense the animal’s trembling inner life.“ What makes this large-size drawing so special is the fact that it is the only preserved preliminary drawing of the destroyed painting 'Streitende Pferde' from 1910 (Hoberg/Jansen vol. I 132; illust. 2). Schardt (cataloug raisonné no. 1910-14) mentions this work with the title 'Weidende Pferde III'. In this painting, which then belonged to Carl Georg Heise, Director of the Hamburger Kunsthalle, Franz Marc achieved his radically new coloring: ”Horses in light red-brown, white-heightened, green mane and tails, the wavy landscape in background in light shades of yellow. Three quarters of the ground greenish, turning into a light crimson in the upper part all the way to the horizon." The four paintings from the same year titled 'Weidende Pferde' (today at the Lenbachhaus in Munich (illst. 3), the Staatsgalerie Stuttgart (illust. 4), Busch-Reisinger Museum, USA (illust. 5) and in a private collection (illust. 6)) share the horse motif as their central theme. Though, our preliminary drawing might only be connected to of them. The present large-scale drawing is simply extraordinary, both for the subject that Franz Marc treasured so much as well as for the fact that it is characterized by the exceptional concept of form that directly led to the unrivaled icon of Expressionism – the 'Turm der blauen Pferde' (The Tower of Blue Horses).
In 1910 the 'Neue Kunstlervereinigung Munchen' mounted its second exhibition, which was roundly criticized. Marc's positive review caused him to be taken into Wassily Kandinsky's circle. However, the group was so fraught with internal tensions that he left the group and founded 'Der Blaue Reiter' with Kandinsky. In addition to an exhibition at the 'Neue Kunstlervereinigung Munchen' ('NKVM'), the Thannhauser Gallery organized an exhibition devoted to 'Der Blaue Reiter' in 1911, which toured Germany in the following with stops at Cologne, Berlin, Bremen, Hagen and Frankfurt. In 1912 the second 'NKVM' was held and, in parallel, the second 'Blauer Reiter' show featured prints and the circle of artists exhibiting works was enlarged to include 'Die Brucke' with Paul Klee and the Russian artists Malevich, Goncharova and Larionov. That same year the 'Almanach Der Blaue Reiter' was published by Marc and Kandinsky. Franz Marc's style changed after he came back from a trip to Paris with August Macke in autumn 1912. During their stay at the French capital they had met Robert Delaunay. Impressed by his window pictures, Marc began to break down his pictorial forms and began to use more pure color and contrasts. He incorporated representations of animals in these refracted pictorial forms as the vehicles for symbolism. By that point Marc had made big steps towards abstraction while the figurative symbolic animal forms continued to recur because to him they meant spiritual purity and redemption. Marc did his well-known painting 'Tirol' (1914) while under the spell of a trip to South Tyrol (1913) with Maria Marc. In summer 1914 Marc painted his most important works, 'Der Turm der Blauen Pferde' and 'Tierschicksale'. In them Marc had achieved a pictorial idiom that was entirely his own, while the influence of the French avant-garde is still evident. That year Marc planned to produce an illustrated Bible in collaboration with Kandinsky, Kubin, Klee, Heckel and Kokoschka. Marc volunteered when World War I broke out and was sent to France. He fell at Verdun on March 4, 1916. Franz Marc's last work is his 'Skizzenbuch aus dem Felde' ['Sketchbook from the Battlefield'].
More Information
+
Sell
Get a free appraisal for a similar object!
+
Register for
Franz Marc
+
Buying from A-Z
+
Contact a specialist
+
Franz Marc Biography
Share