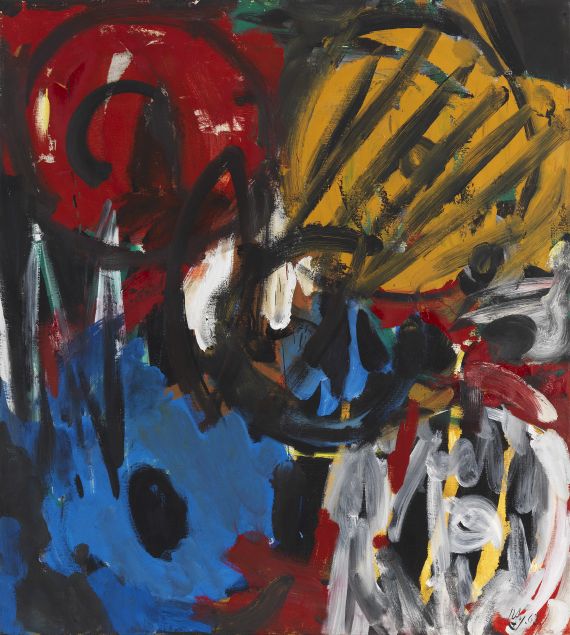 - From the year before the seminal Documenta
- Part of the work group of the "Augenbilder" (Eye Pictures).
- Characterized by dynamic colors and strong intensity.
- Notable exhibitions.

Essay
In 1963 Ernst Wilhelm Nay attained a new form of pictorial expression. By superimposing disc-shaped elements with lines and grids he creates associations with the human eye: In 1963/64 the work group of the "Augenbilder" (Eye Pictures) was born. The year it was made our work was shown, along with other examples from this group, at important solo shows at Galerie Gunther Franke in Munich, in 1964 it was on display at Knoedler in New York and Paris. At its first exhibitions “Mit gotischem Rot“ was still titled “Vierung“ (Crossing), a term that describes the intersection of transept and central nave in church architecture. Other early paintings from this work period are called “Vierfalt in Rot“, “Vierfalt - Blau“ and “Vierklang“. The interplay of four forms and colors was varied in those four paintings from 1963, however “Mit gotischem Rot“is the first work in which the superimposed black and white lines lead to the visual effect characteristic of the “Augenbilder“. Despite the strong colors, the four disc-shaped color fields with the slightly suggested eye filling rather remain in the background, as they are dominated by a rhythm in black and white. An eye rendered in strong brushstrokes hovers at the pictures‘s center, or at the crossing. In the following year 1964 Ernst Wilhelm Nay mounted huge Eye Pictures below the ceiling at Documenta III, thus expressing the important architectural-spatial aspects of his conception. The eyes, as mirrors of the soul they also raise associations with archetypal symbols, now looking down from above and increasing their effect on the observer. "The primal theme of seeing and being seen, expressed through archetypal symbols of magic forces and defensive powers, but also through light and spiritual consciousness, meant a tremendous challenge for Nay’s entirely non-representational art work." (Quote after: Elisabeth Nay-Scheibler, in: Museum Ludwig, Ernst Wilhelm Nay, Cologne, p. 238). This very aspect of his art has been realized in "Mit gotischem Rot" with great mastery. [EH]
More Information
+
Sell
Would you like to sell a similar object?
+
Register for
Ernst Wilhelm Nay
+
Buying from A-Z
+
Contact a specialist
+
Ernst Wilhelm Nay Biography
Share 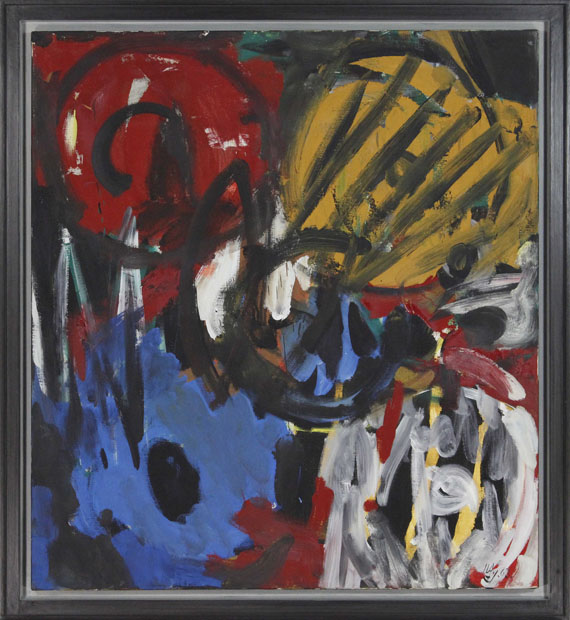 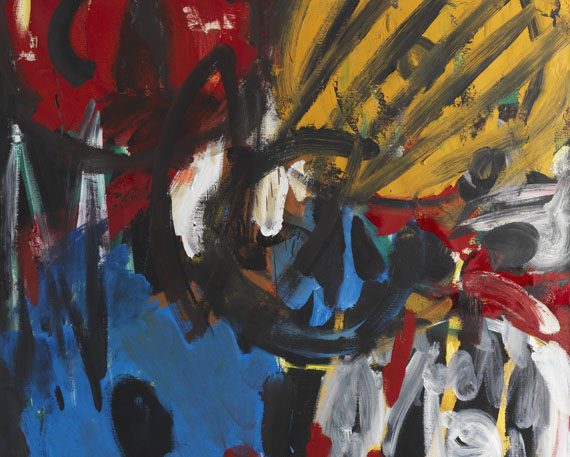