Essay
"Falstaff was a theme that became the artist's friend and companion in his later years […]. [Grützner] created the ideal classic Falstaff type. Treating the old glutton, who is always up to something naughty, on a permanent boozing spree and chasing tail, a liar and coward on top, with lenience. His hero might have been bald, but Grützner showed him with nice white locks of hair around the ears. Cheeky eyes blink from the reddish face. He added mustache and bodkin beard to the moon-face, making him almost look smart. Despite the big belly he depicted him well-proportioned. In one word, Falstaff looks quite pleasant and charming. One could not be angry with him. Grützner's oeuvre had been 'teeming' with Falstaff portraits since the [18]70s. In a torn doublet he burly stands in front of us or sits at a table, with or without a sword, dagger and cap. In many cases he is depicted close-up, from the side or in frontal view." (László Balogh, Eduard von Grützner. 1846-1925. Ein Münchner Genremaler der Gründerzeit, Mainburg 1991, pp. 104f.).
More Information
+
Sell
Would you like to sell a similar object?
+
Register for
Eduard von Grützner
+
Buying from A-Z
+
Contact a specialist
+
Eduard von Grützner Biography
Share 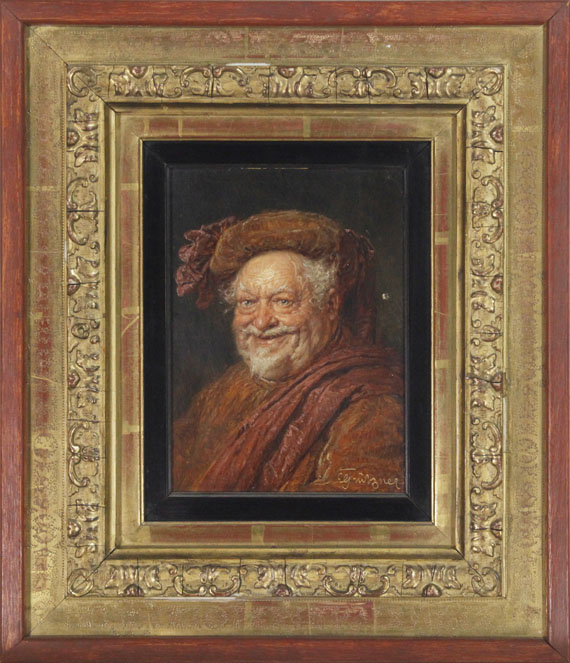