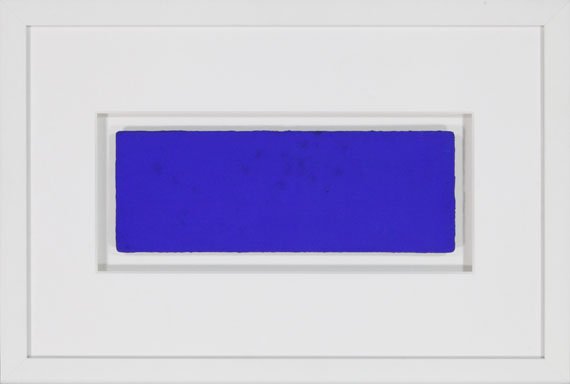 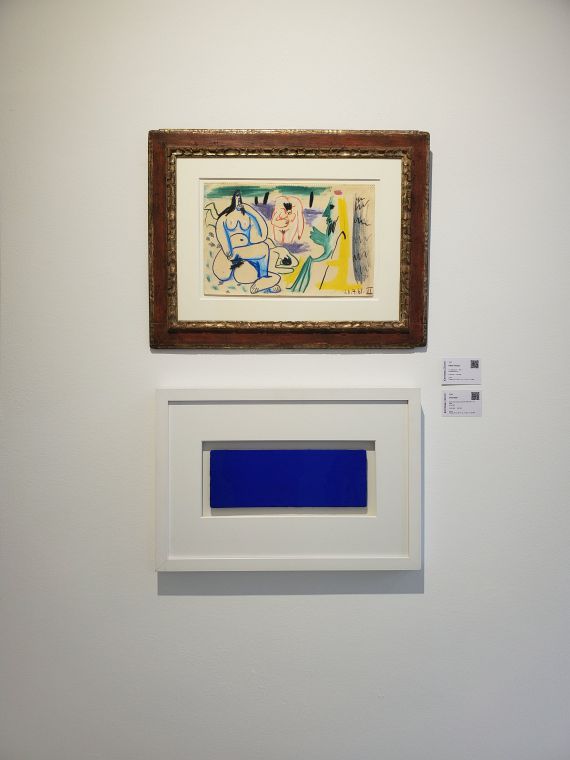 Accompanied by a written confirmation from Mrs. Rotraut Klein-Moquay, Paris, from September 20, 2017. The work is registered at the Archives Yves Klein, Paris, with the number "IKB 316".

" [..] I was inebriated and totally satisfied when I painted in just one color for the very first time."
Yves Klein, quote after: Paul Wember, Yves Klein, Cologne 1969

Yves Klein began to experiment with the effects of colors at a very early stage. He used pure orange, red, yellow or blueand distinguished between joyful, sad, gentle, boisterous, vulgar or regal colors. However, his concentration on monochromatic art went a step too far for some of his contemporaries. In 1955 the Salon des Réalités Nouvelles rejected his work "Expression du Monde de la Couleur Mine Orange" with the justification that the work needed at least one other color in order to be permitted for exhibition. At that point the artist had already made a bold decision: He had found absolute artistic freedom in the pure and monochrome color and would henceforth dedicate all his creation to monochrome art. He named himself "Yves Le Monochrome", his journal was titled "L'aventure monochrome". In 1957 Klein showed his deep ultramarine blue for the first time in the solo show "Proposte monochrome, epoca blu" (Monochrome Proposals, Blue Epoch) at Galleria Apollinaire in Milan. The color soon became his trademark, in 1960 he even had it patented as I.K.B. - International Klein Blue. Just as it is the case with this slightly smaller work made at a later point, his works were mounted leaving a little distance to the wall so that a certain spatiality and depth effect is evoked. The image carrier becomes entirely dematerialized and the observer no longer has to put up with the picture’s decryption but can immediately indulge in the deep blue color and eventually attain an almost meditative state. Through monochrome creation Klein was able to liberate painting from the conventional concept of art, on top, he also made any form of drawing, line handling and color contrasts obsolete. The traditional rational perspective on pictures, commonly oriented at choice of motif and artistic skills, is called into question. Instead of putting focus on the expressiveness of painting or its narrative values, the artist aims at evoking sensation. Owing to the absence of any sort of optical impureness, such as the distracting struggle of different colors for the observer’s attention, we can attain a state of contemplation or even stronger emotions.
In the 1950s this work offered here became part of the collection of the art editor and critic Heiner Stachelhaus (1930-2002) who published the artist biography about the life and work of Joseph Beuys in the 1970s and 1980s, as well as a treatise on the cooperation between Yves Klein and prof. Werner Ruhnau, architect of the 'Musiktheater im Revier' in Gelsenkirchen. Just as it is the case with several of his fellow artists, among them Norbert Kricke and Jean Tinguely, Yves Klein was also hired by Werner Ruhnau in the late 1950s to contribute to the decoration of the theater. Klein made unusually large blue reliefs with a stunning spatial depth for the new construction. Our work was also made during this important period. [CH]
More Information
+
Sell
Get a free appraisal for a similar object!
+
Register for
Yves Klein
+
Buying from A-Z
+
Contact a specialist
Share