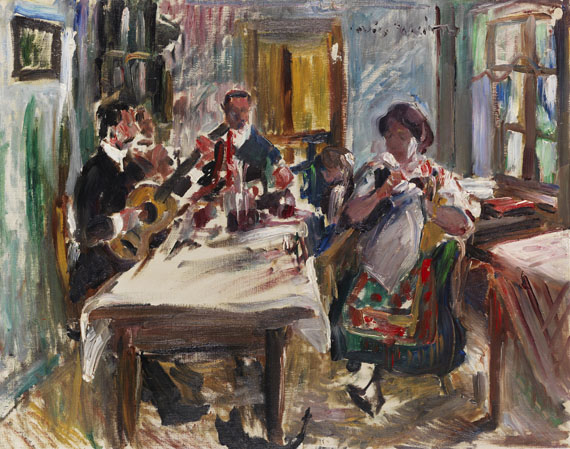 • Made in a year of great significance for both the artist's private life and his artistic development
• Particularly private depiction of the artist's family
• Strong and expressive coloring and lively duct.

PROVENANCE: Leo Nachtlicht, Berlin (at least from 1926 - 1932).
Max Perl, Berlin: Collection Dipl.-Ing. Leo Nachtlicht and works from other collections, auction on February 6, 1932, lot 507 (unsold).
Robert Graetz, Berlin (presumably acquired from the ownership of Leo Nachtlicht in 1932).
Dr. Conrad Doebbeke, Berlin/Hanover (until 1954 the latest).
Elsa and Tomy Doebbeke, Hanover (inherited from aforementioned in 1954 - 1958).
Lempertz, Cologne, 20th Century Art (auction 451), October 28, 1958, lot 52 (with illu., from aforemtnioned ownership).
Private collection, Cologne (acquired from aforemntioned in 1958).
Ever since in family ownership.
Amicable arrangement with the successors of Robert Graetz in 2020.
The work is sold by mutual and amicable agreement and with explicit consent of the successors of Robert Graetz.

Essay
This interior scene was made during a summer stay of the artist family in St. Ulrich, Val Gardena in the Dolomite Alps of South Tyrol. From a slight top view perspective we see a Tyrolean farmhouse parlor through Corinth's eyes. The artist presumably captured the goings-on at the dining table from a position behind an easel. His wife Charlotte, who had invited a couple of local musicians to this merry get together, wears a typical Tyrolean outfit and is engaged in embroidery. The girl standing right next to her presumably is Wilhelmine, their four-year-old daughter, who eyes the three musicians. The pitcher of red wine on the table is already half-empty. Characterized by a Tyrolean atmosphere, the painting emanates the spirit of Corinth's first teacher Franz von Defregger. However, Lovis Corinth transformed the subject into a blaze of color. With swift and poised brushstrokes he captures the atmosphere of this vacation day without wandering off into details. The light color chord of red, blue and green adds a special merriness to the scene. [EL]
More Information
+
Sell
Would you like to sell a similar object?
+
Register for
Lovis Corinth
+
Buying from A-Z
+
Contact a specialist
+
Lovis Corinth Biography
Share 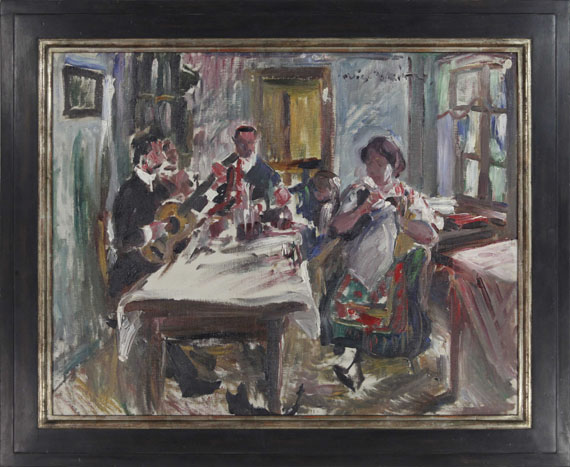