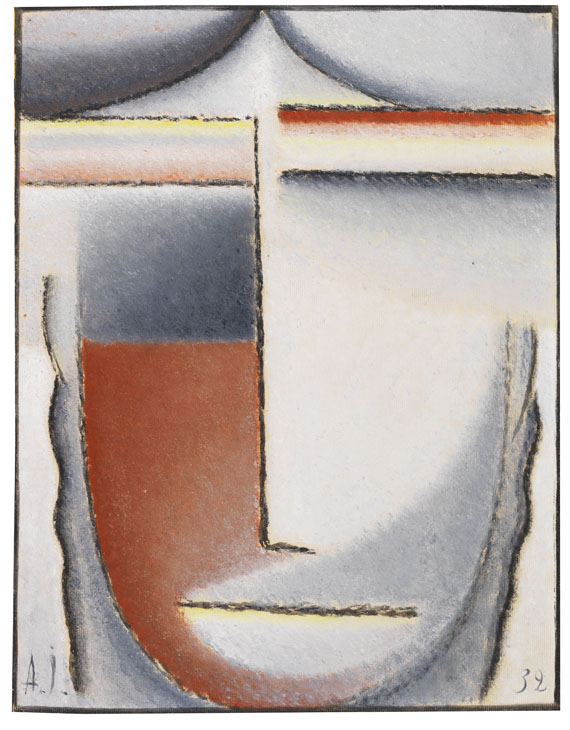 Essay
During these dire straits the artist heavily depended on the support of the Jawlensky Society, founded in 1927 by his close friend the Frankfurt gallerist Hanna Bekker vom Rath. Additionally, he had to rely on the efforts and sales proceeds realized by Emilie Esther Scheyer who mainly lived in the USA as of 1924. Because of her deep black hair Jawlensky lovingly nick-named "Galka" (Russian for daw). In 1916 Jawlensky met the Jewish art trader and collector in Switzerland where he was living in exile ever since he had been evicted from Germany. On and off the artist had been troubled by arthritis over a couple of years, his mobility was severely constricted and from time to time he even was bedridden. He now lived in relative isolation in his apartment in Wiesbaden. In the wake of the increasing xenophobia in Germany an exhibition ban was imposed on him in 1933. Accordingly, Emmy Galka Scheyer turned out a true savior in time of need in the troublesome 1930s. In 1932, the year this work was made, Jawlensky wrote to her: "I suffer a lot, but I am alive– I am not always bedridden. I sometimes sit upright on my bed and work. That‘s all there is left - work. But it also takes will, strength, nerves and ecstasy. Considering my condition, it is really hard to do. But I have a strong will and I love, I love art more than anything else. [.] I talk to god, I pray to him, in my works. [.] I have some very nice pictures. Some are artworks. They emanate a secret life. And they are very beautiful." (Quote after: Ex. cat. Die Blaue Vier, Kunstmuseum Bern/Kunstsammlung NRW, Dusseldorf, 1997-1998, p. 77). Owing to her passion for Modern Art Galka Scheyer became the agent of Jawlensky, Lyonel Feininger, Wassily Kandinsky and Paul Klee in 1924 and tried to establish the artist group under the name "The Blue Four" on the American art market. She organized lecture tours and exhibitions, eventually she sold a total of almost 60 oil paintings as well as several lithographs and watercolors by the artist between 1925 and 1940. Jawlensky also sent this work "Abstrakter Kopf: Winterstimmung" (Abstract Head: Winter‘s Mood) to Scheyer in the USA in 1933. With its gentle and cool colors that reflect the title, the work is an aesthetically appealing example of the Abstract Heads that documents the development towards an increased abstraction prompted by Jawlensky‘s ailing. Eventually, this development led to the even deeper and calmer Meditations. Galka Scheyer was fascinated by the art of the "Blue Four", and was especially enthusiastic about Jawlensky‘s heads: "Jawlensky conveyed the human head as such into a language of the abstract life, lifted it out of its earthly existence, and manifested spirit and soul. The new laws that he had attained are of a mathematical nature. He integrated the laws of other artists in his pictures: architecture in the balanced colors, music in the colors‘ rhythm, dance as the line of colors, sculpture as the colors‘ form, poetry as content or as a word to announce the colors, painting as symphonic summarization" (quote after: Clemens Weiler, Alexej Jawlensky, Cologne 1959, p. 106). Jawlensky‘s fellow artists shared her opinion. For their private collections Karl Schmidt-Rottluff bought one, Paul Klee two and Kandinsky also one of the Abstract Heads. [CH]
More Information
+
Sell
Would you like to sell a similar object?
+
Register for
Alexej von Jawlensky
+
Buying from A-Z
+
Contact a specialist
+
Alexej von Jawlensky Biography
Share 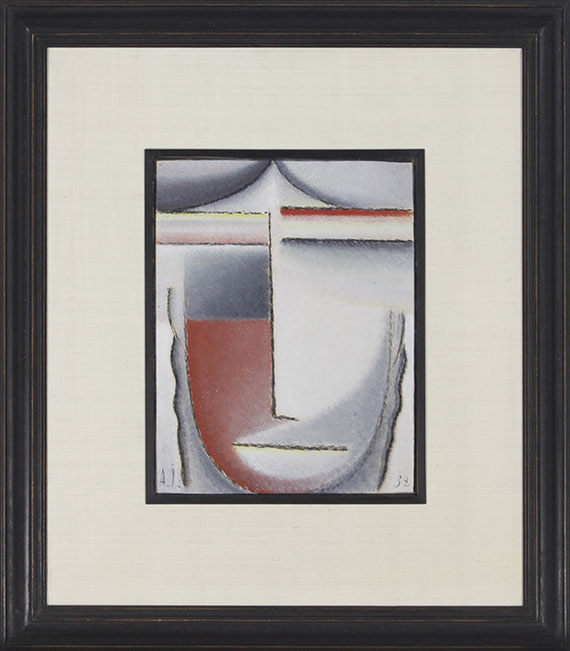