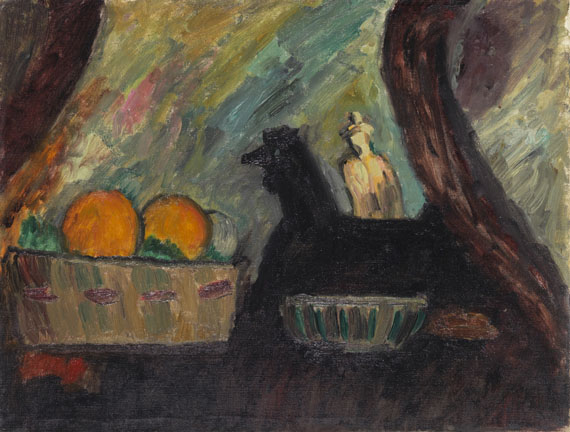 • Pictorial examination of the ideas expressed in the almanac of the 'Blauer Reiter'.
• Made the same year the almanac was released.
• Theatrically staged still life.
• Show at the retrospective at Lenbachhaus Munich and Schirn Frankfurt a.M. in 1992.

Essay
On many occasions Gabriele Münter made paintings that depict her immediate surroundings. Together with her partner Wassily Kandinsky she made reverse glass paintings, votive paintings and figurative carvings, they painted furniture and decorated walls. Along with landscapes, still lives and interiors are among the artist’s most fundamental genres. Over the first years in Murnau since 1908 Gabriele Münter made pictures such as the ”Dunkles Stilleben (Geheimnis)“ (1911, GMJE-Stiftung inventory number S 152) which shows collected objects she kept at the so-called Russian House or a still life with figures on a table dedicated to Saint George(1911, Städtisches Museum im Lenbachhaus). The artist arranged varying objects with flowers on a table in front of different backgrounds, in some of her still lives she even placed portraits of her friends. These works, just as it is the case with this ”Stilleben mit Orangen“, are very gestural and intensive pictures, with their linear hatches and strong contours they were created with a lot of verve. The artist does without spatial details in favor of the powers of color and light that accentuate the individual objects, presenting them like on a stage. Our painting develops the motif even further: A small figure of a herder from her collection of carved figures from the Oberammergau region and a bowl in front of and behind the shadowed form of a pottery chicken and a curved armrest. The depiction is defined by the curtain in left and the armrest in right and puts sole focus on the forms and not the actual spatial position. An increasingly two-dimensional abstraction finds expression in Gabriele Münter’s new composition concepts. [MvL/EH]
More Information
+
Sell
Would you like to sell a similar object?
+
Register for
Gabriele Münter
+
Buying from A-Z
+
Contact a specialist
+
Gabriele Münter Biography
Share 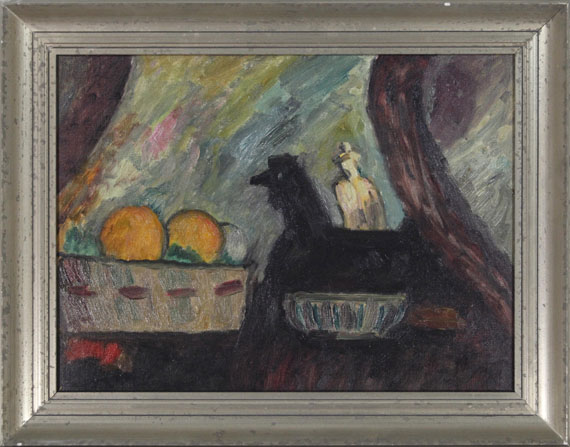