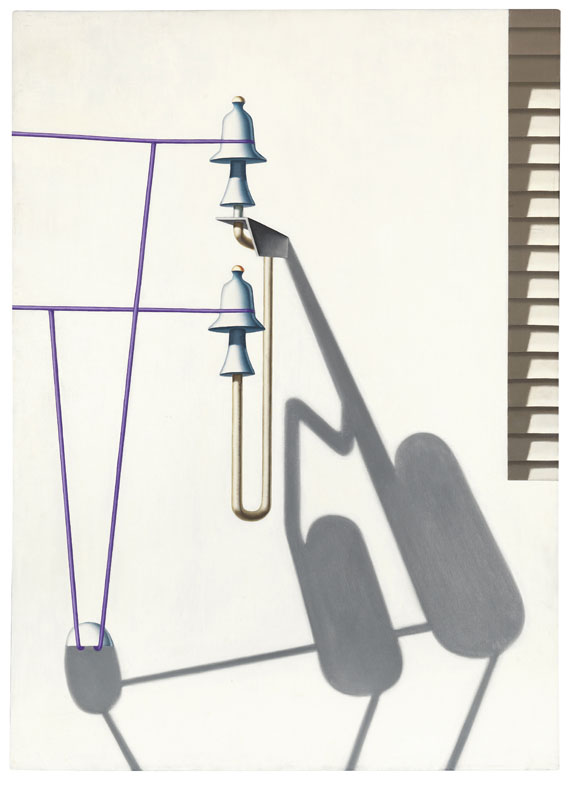 LITERATURE: Cf. Konrad Klapheck. Retrospektive 1955 - 1985, published by Werner Hofmann, München 1985, p. 92.
"The difference between the Photo Realists [.] and him [Klapheck] lies in the decided alteration between object and image, the high degree of abstraction that accounts for his objects, their disentanglement from a natural ambience and thus - despite everything - their remoteness from reality, their fetish character and emblematic stylization. All of this means that Klapheck's pictures may neither be confused with what others do nor with what others try to express.
Werner Schmalenbach, 1976, quote after: Konrad Klapheck. Objekte zwischen Fetisch und Libido, Basel, Galerie Beyeler 1976, no p.

A sole focus on the object, the machine objects to be more precise, is Konrad Klapheck’s central artistic theme and, moreover, his unique feature. He made his first typewriter picture as early as in the 1950s, initially rendered true-to-life, and soon took to a certain monumentalization. Through detail views and an isolated representation he increasingly alienated his pictures from the actual objects, additionally, he conceived interpretive titles such as "Der Chef" (The Boss, Kunstmuseum Düsseldorf) or "Der Diktator" (The Dictator, Museum Ludwig, Cologne). At around the same time Konrad Klapheck became occupied with depictions of sewing machines, irons, telephones, water kettles and all sorts of household machinery. To Klapheck painting has always been a way to come to terms with his own past, to work up early childhood experiences by rendering them onto the canvas in order to take them to the present day. Just as Klapheck’s humanizing titles suggest, his machine pictures, a previously entirely unknown subject in European art history, are always images of man. In retrospect Klapheck sums up: "The first couple of years when I was entirely focused on technology and machines, small technical items found in households and offices, I was often asked, particularly by older people like friends of my mother or by my mother-in-law: "Well, your kids are so charming, don’t you want to paint them? And why do you exclude man?" Back then I thought: But man is at the center of my work, he is the central theme! But I am using the instruments that man makes uses. Man has created self-portraits since the Stone Age, from the first stone wedge to today’s computers. Man is reflected by the objects of utility he creates." (Konrad Klapheck, 2002, quote from: Klapheck. Bilder und Texte, Munich 2013, p. 114).
In our early, light and lucent work "Die Verschwörung" (The Conspiracy) Klapheck does not broach the theme of the telephone as one of the most significant technological modern comforts, instead he radicalizes his imagery by declaring the entire wiring - including cable and porcelain insulators along with the eccentric shadows they cast – the central pictorial object. Two very similar works, both in terms of theme and motif, are part of the collection of the Pinakothek der Moderne in Munich: There is "Der Angeber" (The Bragger, 1965; formerly in Collection Wormland), for which Klapheck found inspiration in a wall-mounted lever of a streetcar overhead contact line secured with a padlock, and the painting "Das Horoskop" (The Horoscope,1966), acquired through Galerie Rudolf Zwirner in 1979. What our painting "Die Verschwörung" and "Das Horoskop" share is the initiating moment when the artist took a look through a window of a hotel in Italy at the facade of a house on the other side of the street. The object itself and the bizarre shadow it cast captivated Klapheck so much that he initially captured it on a photo and a drawing in order to execute the painting in the following. In terms of composition, however, our bright painting clearly differs from the work with almost the same motif in the Pinakothek der Moderne: An increased focus on a detail and the reduced chromatic values lead to an impressive minimalism that calls reminiscence of the art of the ZERO movement and the much later creations of Eberhard Havekost. Klapheck presumably chose the title "Die Verschwörung" as reference to the conversations held over these ominous wires, thus establishing the relation between the object depicted in isolation and monumentalization and man as its creator. Klapheck’s "Verschwörung" is an outstanding example of his artistic creation and a particularly fine document of both his unique style and his remarkable artistic progressiveness. On top of that it convinces with a notable provenance, as it used to be in possession of the acclaimed Swiss gallery owner Marie-Louise Jeanneret, whom Andy Warhol portrayed in 1974. After many years in private possession, it comes back to the market from a collection based in the Free Hanseatic City of Bremen. [JS]
More Information
+
Sell
Get a free appraisal for a similar object!
+
Register for
Konrad Klapheck
+
Buying from A-Z
+
Contact a specialist
+
Konrad Klapheck Biography
Share