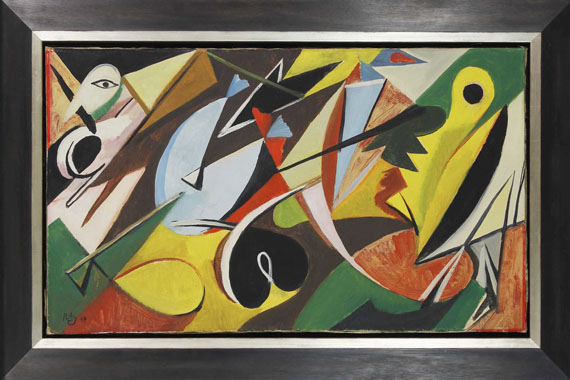 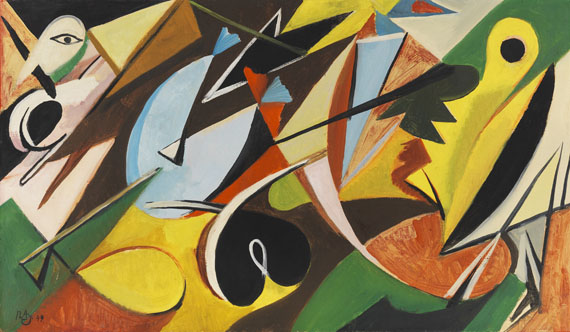 • From the work series of the "Fugal Pictures".
• Colorful document of Nay's occupation with music as a key source of inspiration during this period of creation.
• From the collection Beck, Stuttgart - an acclaimed collection of world-renowned Modern Art.
• A document of the transition from figuration to abstraction.
• Balance between order and motion.
• Colors and forms in absolute harmony.
• "Plasticity arises without plastic illusion." - Ernst Wilhelm Nay to Alfred Hentzen on May 14, 1950.

"You yourself are your own obstacle, rise above yourself"
Hafis, Persian lyricist

The work "Persisches Gedicht" (Persian Poem) used to be part of the acclaimed private collection Beck from Stuttgart. The world-renowned art collection comprises all the big names of German Expressionism and Modern Art. Paul Beck laid the foundation for the collection. Born into humble homes in 1887, he started his own heating and plumbing company which eventually became the biggest of its kind in the state of Baden-Württemberg. Paul Beck found his way to art through literature. He made most of his acquisitions directlyfrom the artists or their heirs. He was friends with Käthe Kollwitz and Oskar Schlemmer, and acquainted with Gerhard Marcks, Willi Baumeister and the son of August Macke. He carried out the installation of a central heating system for the residence of the family of thepainter Adolf Hölzel in Stuttgart. In compensation for his service he received a good part of the artist‘s estate. When Beck‘s son Helmut inherited the collection in 1948, it had already grown to considerable size and comprised works by Wassily Kandinsky, August Macke and Alexej von Jawlensky. Helmut Beck decided to continue his father‘s collection and followed in his footsteps by pursuing a similar acquisition method: He also became close friends with many artists, among them Willi Baumeister and Ernst Wilhelm Nay, with whom he was in a close and lifelong friendship. He bought the work "Persisches Gedicht" directly from the artist. It is an impressive work from the series of the "Fugale Bilder" (Fugal Pictures), made in a brief period of creation between 1949 and 1951, which marks the transition from figuration toabstraction, and illustrates the development of Nay‘s non-representational painting. The glowing colors and entwined forms announce a new beginning in Nay‘s art. The color fields were stronger defined and music became one of the main sources of inspiration for Nay‘s compositions, which becomes very obvious in our painting through its pictorial structure that is enlivened by motion and dynamics: Nay combines light and heavy elements, contrasts bright yellow with dark green, confronts flowing ornaments with pointed geometric shapes and thus weaves an expressive rhythmical sound carpet in which one form responds to the other. He created a composition characterized by the rhythm and sound of a Persian poem with gently oscillating forms and in velvety coloring. [SM]
More Information
+
Sell
Get a free appraisal for a similar object!
+
Register for
Ernst Wilhelm Nay
+
Buying from A-Z
+
Contact a specialist
+
Ernst Wilhelm Nay Biography
Share