• From the first series of the "Variation" of a landscape theme.
• Elements of the motifs in reminiscence of St. Prex.
• In respect of season and the artist's menatl state this work is characterized by a particularly bright mood lighting.
• The painting was shown at the first Venice Biennale after WW I in 1920, which was the first to accept contemporary artists.

Essay
During his stay at St. Prex on Lake Geneva the "Variations" emerged as Alexej von Jawlensky’s main motif. With the outbreak of the First World War he was forced to leave Germany on the spur of the moment and found refuge together with Marianne von Werefkin and Helene Nesnakomoff on Lake Geneva. His “Variations” were based on the view from the window of his small, makeshift studio room. He was captivated by the play of colors over the course of the day and the seasons and rendered variations of the view following a meditative yet systematic method: The famous work group “Variations” was born. First works from 1915 show single trees, scrub and the path as nearly abstract color fields, however, Jawlensky’s "Variations" never entirely dissolved into pure abstraction, which makes them so interesting. Our work is particularly captivating for a perspective that is slightly shifted away from the usual composition. The large oval, actually a cypress with a path on its right as seen from Jawlensky’ window, would usually be placed in the left part of the picture but is found in the center of thsi work. In our "Variation" real circumstances and layouts give in to a more composed solution as Jawlensky had attained an almost symmetrical pictorial arrangement. Interestingly, Jawlensky inscribed this variation ‘Ascona’. It is likely that this work stands for the peace and calm he had found in his exile on Lake Geneva. [EH]
More Information
+
Sell
Would you like to sell a similar object?
+
Register for
Alexej von Jawlensky
+
Buying from A-Z
+
Contact a specialist
+
Alexej von Jawlensky Biography
Share 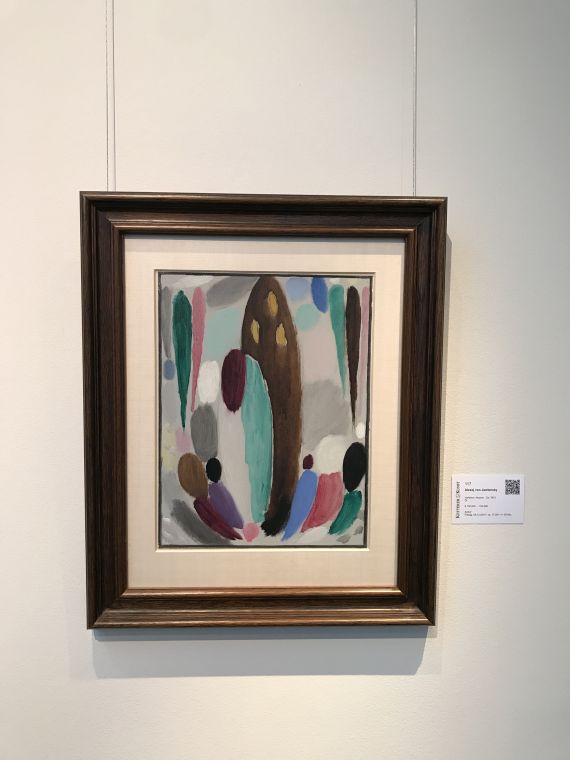