Lot 202
Video
Video
Back side 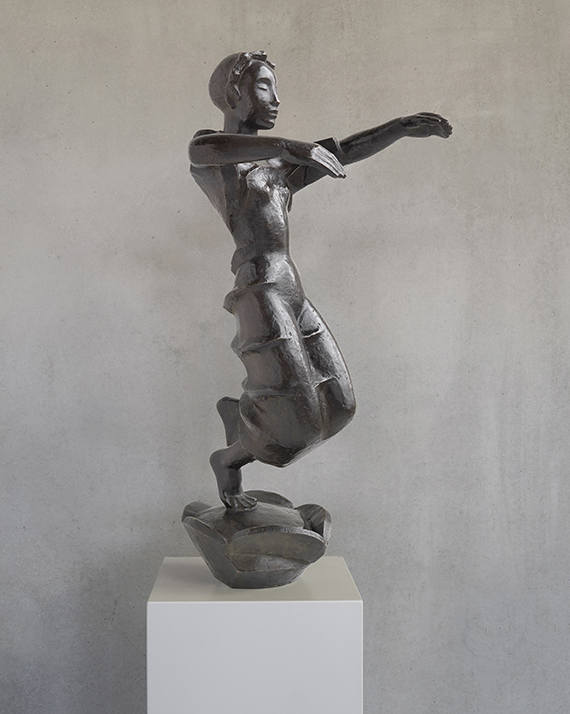 enlarge image
+
202
Georg Kolbe
Javanische Tänzerin, 1920.
Bronze with black brown patina
Estimate:
€ 120,000 / $ 124,800
Sold:
€ 649,000 / $ 674.960
(incl. surcharge)
Javanische Tänzerin. 1920.
Bronze with black brown patina.
With the monogram on the plinth below the right foot. From an edition of four or five copies. Height: 73 cm (28.7 in).
Cast by art foundry Noack, Berlin-Friedenau between 1921 and 1929. Dr. Ursel Berger mentions a planned edition of 5 while Noack's foundry documents only specify three casts from 1921, 1922 and 1925. The plaster model has not been preserved.
• Lifetime cast executed by Noack, Friedenau-Berlin.
• The bronze was a gift to the architect of the artist's studio, which today serves a part of the Georg Kolbe Museum in Berlin.
• From an edition of only four or five copies.
• In 2020 and 2021 this cast offered here was part of two the important exhibitions "Moderne und Refugium: Georg Kolbes Sensburg als Architekturdenkmal der 1920er-Jahre" and "Der absolute Tanz: Tänzerinnen der Weimarer Republik" at the Georg Kolbe Museum.

Accompanied by an expertise issued by Dr. Ursel Berger from February 24, 2020.

"Kolbe effortlessly perceived nature as a form of art and art as a form of nature."
Karl Scheffler about the "Javanischen Tänzerin" in 1923

At the heyday of colonialism around the middle of the 19th century the ethnological expositions, or simply human zoos, saw a great boom in Europe. In zoos, the circus, at fairs, festivals, in variety shows and at world exhibitions people from distant cultures were presented in a setting resembling their place of origin. People reenacted their daily life on over-sized stages in front of visitors, just as it is the case here with the four Javanese dancers in a village at the Exposition Universelle in Paris in 1889.
Dance as a source of inspiration

Around 1900 the conditions for the dancers changed; they were discovered by high culture dance and a lively exchange between countries in Europe and Asia began. Visual artists also explored dance as a source of inspiration, and included the expressive gestures in their sculptural repertoire. They found inspiration in encounters with distant cultures that became established in the cultural metropolis of Berlin before and after the World War I. The Japanese dancer Ota Hisa, better known as Madame Hanako, toured Europe from the beginning of the 20th century to the early 1920s and probably met Auguste Rodin in Marseille as early as in 1906. Over the years she inspired the sculptor not only for numerous masks, but also for countless movement studies. And the German-Japanese Taka-Taka, who lived in Berlin, was also fascinated by the world of dance and in posed for Georg Kolbe's first famous bronze, the “Japanese woman” in 1911.
Stars of the "Ballets Russes", such as Waslaw Nijinsky and Tamara Karsawina, also visited Kolbe in 1912 during their guest performance in Berlin. Fascinating pencil sketches, drawings and sculptures document this important encounter. August Macke also fell for the magic and painted “Russian Ballet” in 1912 (today at Kunsthalle Bremen). Kolbe's encounter with the various dancers is documented in drawings, sculptures and photographs. Numerous watercolors and sculptures from the early 1920s testify to the lasting effect the sacral dances of Charlotte Bara had on the sculptor. Drawings of the passionate dances of Vera Skoronel have survived, and poses by the choreographer Gret Palucca exemplary of modern were also well-documented.

The sculpture of a 'Javanese dancer' that Kolbe met and modeled in Berlin in 1920 is particularly virtuoso. The identity of the dancer is not clear; it seems quite possible that the German-Japanese Taka-Taka posed for this work again, as she also performed Javanese dances and inspired the dance enthusiast Kolbe to works showing her in remarkable poses. Her stage is a stylized flower on which the tightly clad dancer develops her figure, standing on her right toes, her whole body tense and with slightly bent knees, hands stretched out at shoulder height, and maintain balance, as a photograph of her Kolbe had commissioned illustrates.

Expression of the ethnologically foreign

The accounts of the German poet Max Dauthendey, who lived on the Indonesian island of Java in 1915, describe local music and dance and underline the expression of this ethnologically foreign. He reported: “This music is so wonderful. It is like an unintended music played by on many instruments by ten to twenty Javanese people at the same time. The whole thing is called "Gamelang". This is the music one would hear if moonlight was music, if dewdrops were music, if the scent of orange turned to music, and if the delicate dance movement of naked Javanese women became music, and also if a fire burnt down in music. [.] And the arms turn into wings, and the dancers into flowers, standing still and swaying like flowers in the night wind, for like fifteen minutes in one spot, while fingers and palms dance instead of arms and feet, and they move their arms so gently like the blossoms of a flower in a soft breeze. It‘s like a balmy breeze of music made the static dancers move their feet so little that it is barely noticeable. The wonderful hands do most of the dancing, these most beautiful hands and fingers in the world, which can surely shine a light from their slender fingertips that our unsubtle eyes just can‘t perceive. ”(Max Dauthendey, Javanischer Tanz. Aus einem Brief Max Dauthendeys, in: Du, Kulturelle Monatsschrift, vol. 10, 1950, issue 5, p. 64).

According to the information provided by Ursel Berger, the casting records of Noack only mention three copies of this enchanting bronze: This one here was a gift Georg Kolbe gave to Ernst Rentsch (1876-1952), the architect of his studio/house, who expressed his appreciation on August 12, 1929: “That was a surprise today. Your fine work and your dear letter, both make me happy. Thank you very much. ”(Archive Georg-Kolbe-Museum). Ernst Rentsch left Berlin in the early 1930s and returned to his hometown of Basel with the “Javanese Dancer”. [MvL]
More Information
+
Sell
Get a free appraisal for a similar object!
+
Register for
Georg Kolbe
+
Buying from A-Z
+
Contact a specialist
+
Georg Kolbe Biography
Share