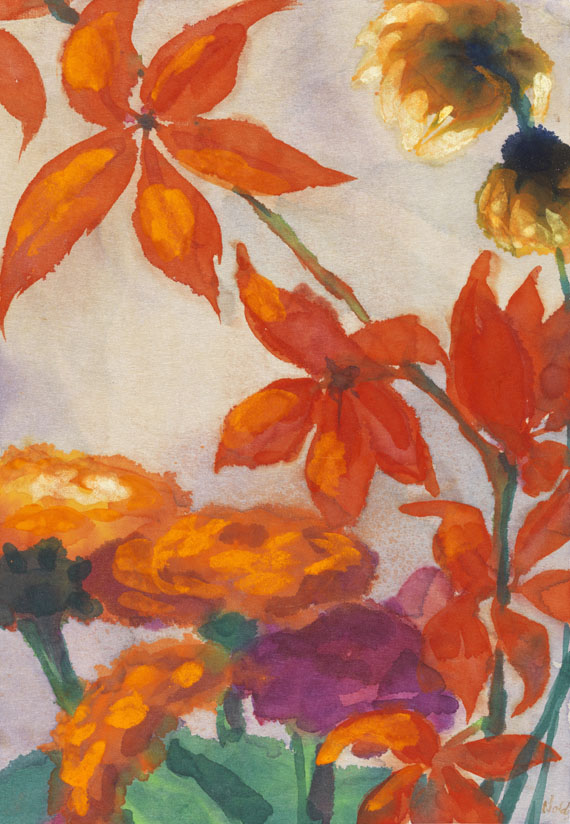 Essay
Emil Nolde attained an unrivaled mastery in the usage of the watercolor technique that deservedly made him one of the most acclaimed representatives of German Expressionism. The swiftly made paper works require meticulous preparation. In the 1950s Jolanthe Nolde recalled his watercolor technique and describes the procedure as follows: Nolde thinned the single color in a separate vessel filled with water, a task he would always perform himself, because every color requires a different degree of thinning, and he had an instinct for the right ratio. The cups with the colors were placed in certain order in two rows in his studio. He used a different brush for each color, for the important colors he even used a couple of brushes in different sizes. There also were a couple of vessels with clear water into which he dipped the color-soaked brushes before putting the brush onto the paper. Nolde literally worked with a dripping wet brush. He had to work quickly and had to integrate blurs of color into the composition. If Nolde wanted to render a more intensive hue he had to work over the respective spot a few times in row. He hardly mixed the colors as they could become pale. He created color carpets of different intensities. The sheets are soaked with color, the paper’s white tone, which shimmered through in earlier works, was hardly employed any longer. The watercolors are entirely about the nature of the color. The Japan paper, of which he had enormous stocks in his studio, served him as basis to make his beloved colors shine bright and lively. They lend a velvety character to the colors. He worked with thick and soft sheets, absorbent like blotting paper, and also with thinner types of paper. He cut the sheets by hand, which explains the sheets irregular edges. A large number of Emil Nolde’s watercolors were made in this technique. Our fascinating flower composition sports warm autumn colors. Zinnia, red vine leaves and withered sunflowers dominate the depiction. The described method of working in layers becomes particularly obvious in "Zinnien und Sonnenblumen" and makes for its special appeal. Blossoms and leaves reflect golden rays of light, capturing the special autumnal light atmosphere and, in the truest sense of the word, make the work glow. [SM]
More Information
+
Sell
Would you like to sell a similar object?
+
Register for
Emil Nolde
+
Buying from A-Z
+
Contact a specialist
+
Emil Nolde Biography
Share