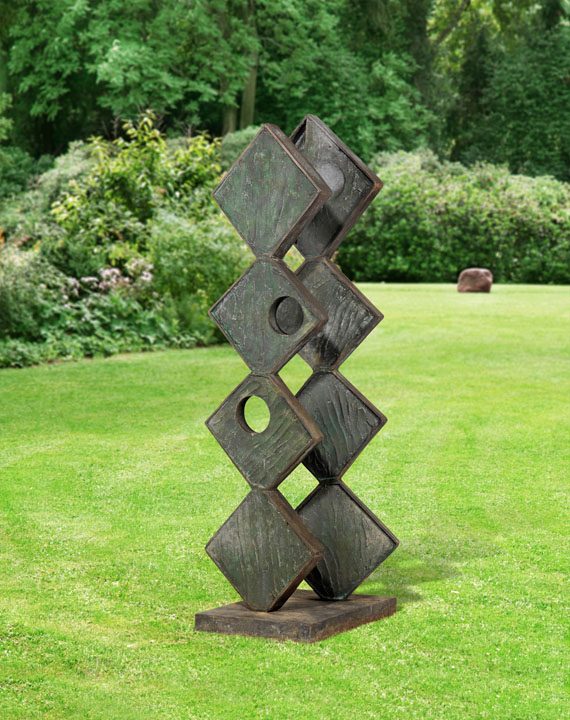 Essay
On January 10,1903 Barbara Hepworth was born Jocelyn Barbara Hepworth in Wakefield, England. Hepworth initially studied fine arts in Leeds where she met Henry Moore with whom she would become close friends for the rest of her life. Following her education she attended the Royal College of Art in London to study sculpting. In late 1934 Hepworth attained an entirely abstract sculpture free from simplifications or abstractions of human or organic forms which could still be found with her contemporaries Brancusi and Arp. These works from Hepworth can be considered the first entirely abstract sculptures everand resembled the white reliefs that Ben Nicholson made around the same time. Hepworth developed an array of strictly reduced forms that could do without any narrative elements. By working with the material it gets its original meaning back through her creation. Her works are primarily characterized by a focus on the beauty of the material. The only dynamic element of her sculptures are the perforations, holes or so-called "pierced forms" which Hepworth put into the shaped material as the first sculptor ever. She found inspiration for this stylistic device in her physical and spiritual home Cornwall. With the outbreak of WW II she left London together with her second husband Ben Nicholson and their four children, and settled in Cornwall. In 1949 she acquired Trewyn Studios in St. Ives, where she would live and work up until the end of her life. In Cornwall she came across Mên-an-Tol, a 3000 to 4000 years old megalithic formation from the Bronze Age, a stone formation with a perforated stone in the middle. A magic place for Hepworth, too, as the stones symbolize eternity and truthfulness to her. Her new domicile in St. Ives became home to a sculpture garden, her studio was surrounded by a large garden that, due to the Mediterranean climate, had a subtropical vegetation. Over the first couple of years she used it as an open air studio integrated her sculptures into the garden landscape like natural plants. Nature’s variety was an inexhaustible source of inspiration for the artist: "We find incessant renewal through observing nature, our senses for mysteries and our imagination are kept alive, and with the right perception it can give us the power to project a universal or abstract version of beauty in a plastic medium.“ (Barbara Hepworth, 1934). "Square Forms (Two Sequences)" is a typical work from Barbara Hepworth’s late perod of creation. In the late 1950s the sculptor began making bronzes and soon realized that this medium offered potential to significantly boost her works in terms of extent and size. Hepworth was inspired by her long-time friend Henry Moore, and her bronzes also contributed to the global acclaim of her works. This sculpture was made the same year (1963) that Hepworth’s monumental sculpture in front of the United Nations Secretariat in New York was unveiled, and was cast in bronze in 1966. The casting model was made with delicate netting wire and plaster, this work here was constructed from eight individual square units with a largely untreated rough surface. Through the exploration of the surface of this open and linear composition she underlines her preference for natural light. The squares' rough topography captures the movement of the sun; light and shade and the resulting interplay of gap and volume add vitality to the forms while the green-gray patina emphasizes the texture’s vibrancy and reflects Hepworth’s joy in experimenting and her appreciation for the patination, as it is the crowning process of the bronze cast. [SM]
More Information
+
Sell
Would you like to sell a similar object?
+
Register for
Barbara Hepworth
+
Buying from A-Z
+
Contact a specialist
+
Barbara Hepworth Biography
Share 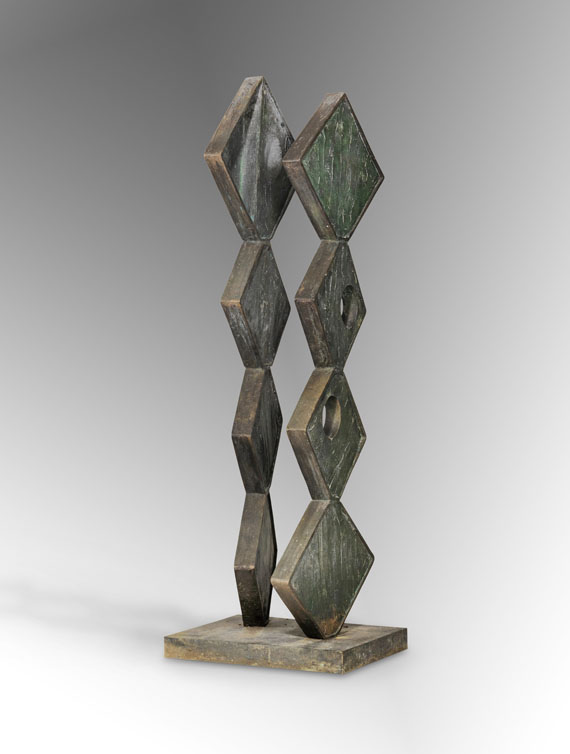 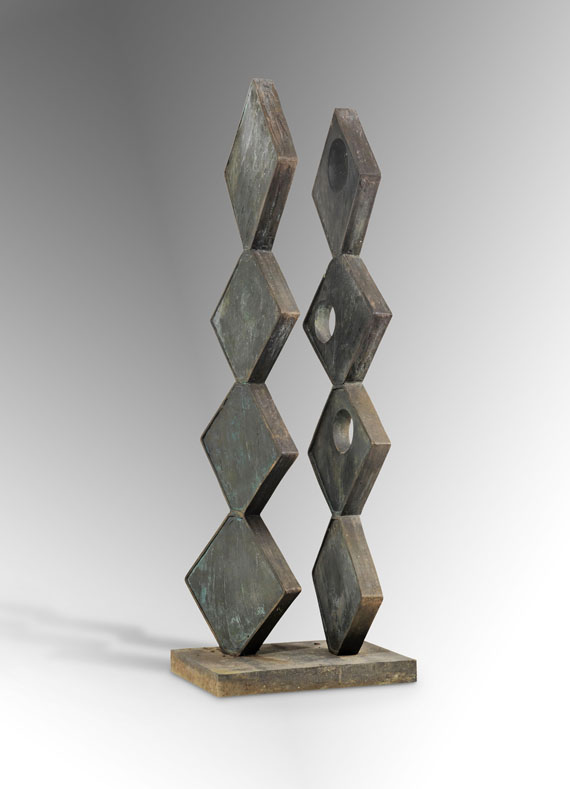 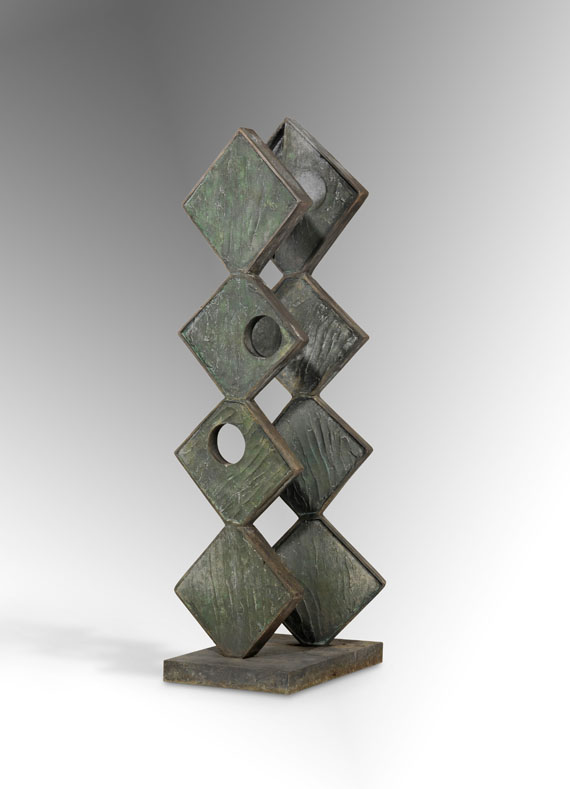 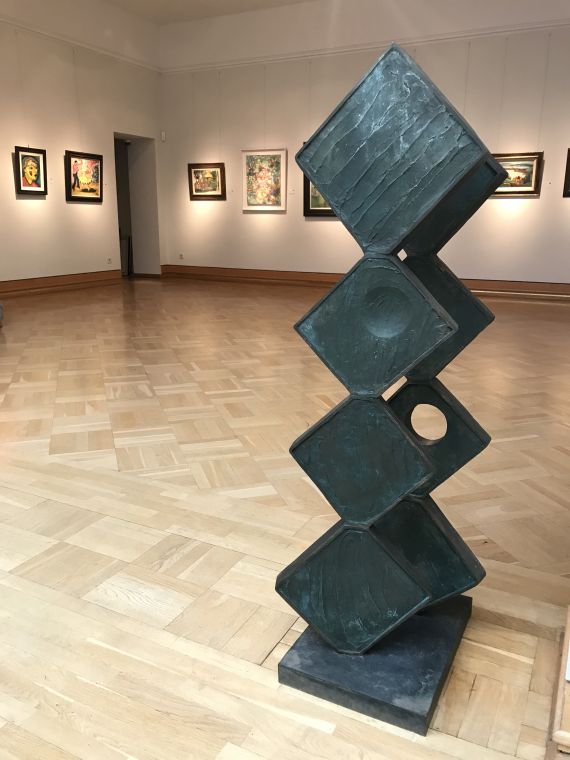 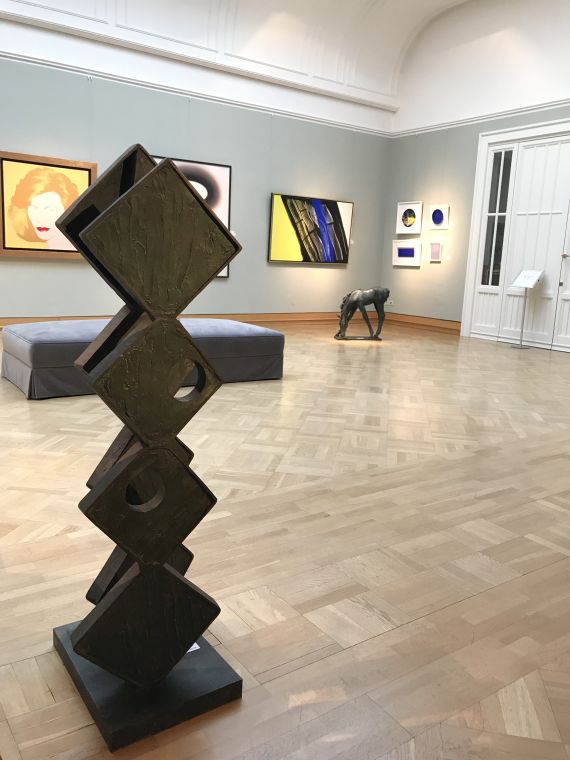