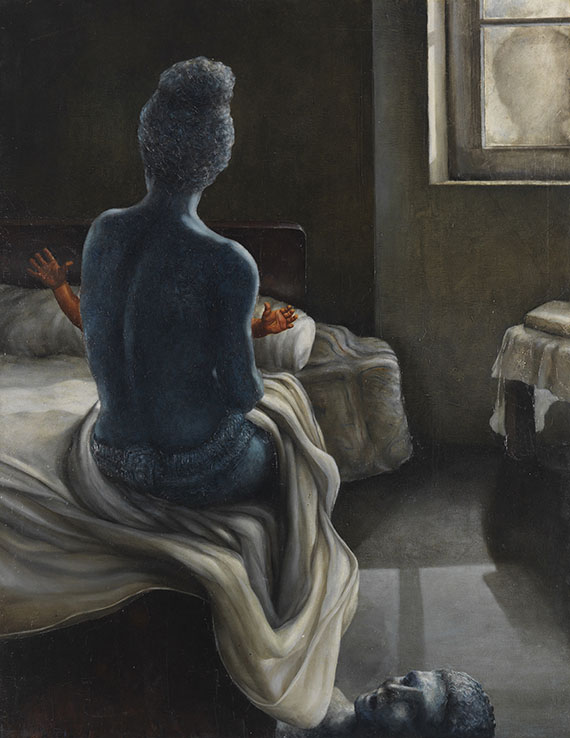 • Offered on the international auction market for the first time.
• Best provenance: Third Triennial India.
• Mysterious, surrealistic work.
• Next to "Doll in the Lane", this is the second characteristic work from the artist's sought-after periof of creation offered in the upcoming fall auction ("Post War/Contemporary Art", December 7, 2019, lot 302).

EXHIBITION: Third Triennale India, 1975 (with a label on verso of the frame).

Essay
Bikash Bhattacharjee is regarded one of the most important Indian painters of the second half of the 20\up6 th century. His works can be found in many public collection in India.
In this painting Bhattacharjee picks Hindu goddess Durga as central theme. Traditional depictions usually show Durga as a being with several arms. Over the course of the 20\up6 th century, however, a new form of portrayal developed in modern Indian art in which Durga can no longer be identified on basis of physical features or attributes. The depiction of the highest divine power began to differ strongly from traditional forms. Modernist representations vary, they are no longer subject to a traditional scheme. The highest goddess now appears in a variety of scenes, among them scenes that resemble those scenes typical of genre painting, however, despite the great variety they are all based on the concept of Durga as the highest female power. Bikash Bhattacharjee typical depictions of Durga show the goddess Durga in scenes from everyday life, for instance in form of a woman carrying her groceries across the street, or as a mother on her way with her children. What all depictions have in common is the key motif of a powerful woman that emanates femininity and dignity.
This painting also has to be seen in this context. "She and the Morning" is both a wonderful example of this theme and a prime document of the complexity of Bhattacharjee’s pictorial language. The observer sees a well-composed scene: A figure on a bed in the morning in rear-view. The protruding hand of a child on the woman’s lap. The male head in profile view modeled from the sheet on the floor. The silhouette of a head in the window right of the person seated on the edge of the bed. It is a complex arrangement of pictorial elements that form a whole in a very surrealistic manner.
On top of that it is also Bhattacharjee’s technical mastery that brings his paintings to perfection. Accordingly, all elements of the painting "She and the Morning" are in perfect balance, while the pictorial account of the consistency of the depicted objects call reminiscence of the Old Masters. [EH]
More Information
+
Sell
Would you like to sell a similar object?
+
Register for
Bikash Bhattacharjee
+
Buying from A-Z
+
Contact a specialist
Share