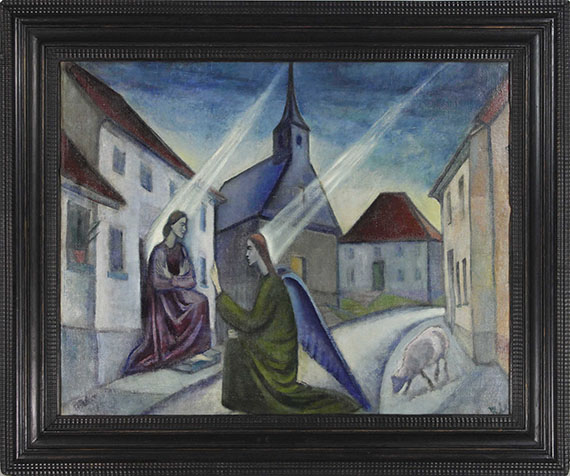 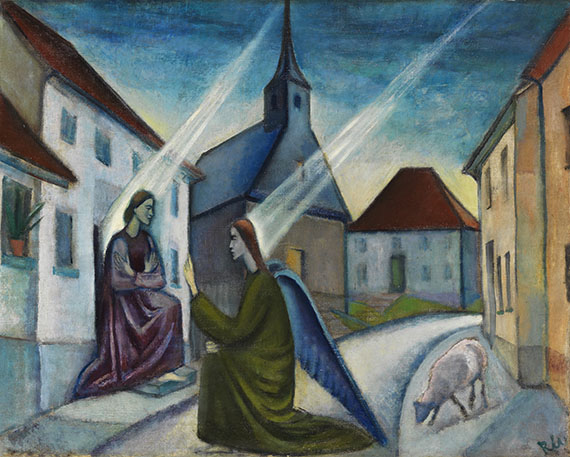 • This is one of the first works in which the artist, owing to the terrors of WWI, addresses religious themes
• The work shows the Old Town with the Nonnenkirche of Blankenhain in Thuringia where Rée spent the summer of 1916 at "Bassa Selims Haus", a recreation home for artists
• The work was part of the collections of the Hamburg bankers Carl Melchior (1871-1933) and Fritz Warburg (1879-1964), the latter the brother of the epoch-making art historian Aby Warburg.

Rediscovery and reassessment
"Anita Rée, Jeanne Mammen and Hanna Nagel stand representative for the long overlooked, forgotten and underestimated artists of the modern age", explains the catalog of the exhibition "Umbruch" recently shown at Kunsthalle Mannheim. This is just one of numerous exhibitions with which the work of the exceptional Hamburg artist Anita Rée is brought into the focus of museums, institutions and the art trade in the course of a comprehensive reassessment of the contribution of female artists, finally bestowing upon her the deserved, albeit belated, appreciation. In 2013 the publication "Anita Rée. Der Zeit voraus - eine Hamburger Künstlerin der 20er Jahre" by Annegret Erhard was released. In 2017/18 the Kunsthalle Hamburg dedicated a comprehensive retrospective to her. Based on the first catalog raisonné from 1986, the revised new edition of the catalog raisonné with numerous new research results by Maike Bruhns was published the same year. In 2019, some of her works were part of the exhibition "Vergessene Moderne. Kunst in Deutschland zwischen den Weltkriegen" (Forgotten Modernism. Art in Germany between the World Wars) at Kunstforum Ingelheim. Today Anita Rée is considered one of the most important representatives of New Objectivity.

The turn to religious motives
From 1904 she received painting lessons from Arthur Siebelist in Hamburg, from 1913 she stayed in Paris for further artistic training. She then spent the summer of 1916 at the artist's recreation center "Bassa Selims Haus" in Blankenhain in Thuringia. Intended as a stimulating retreat, it had recently been opened by Carl Georg Heise, who later became the museum director of the St. Annen Museum in Lübeck, and the publisher Hans "Giovanni" Mardersteig, and offered free accommodation for artists and scientists. Initially Anita Rée was not very enthusiastic about the Thuringian province, even Weimar had neither modern nor good old art to offer, she explained in a letter to a painter friend. But this summer, in precisely this secluded environment, Rée attained inspiring creative forces and a completely new topic and motif: In addition to street scenes, historical buildings and regional landscape depictions, she devoted herself to religious topics for the first time, which from then on would frequently appear in the oeuvre she compiled until the end of her short life.

The later oeuvre. Monumental commissioned works
The artist was so occupied with the composition of the picture offered here that she repeated the scene in further versions (Bruhns G 39/40). Rée also made further Annunciation scenes as pure figure studies with wide spread angel wings (G 67 verso and G 39). Even after the end of the First World War, Anita Rée continued to examine religious subjects and Christian motifs in her painting and then found a deep religiousness, especially during her three-year stay in Positano, Italy. After her return to Hamburg she expressed and processed these experiences in numerous works. Among other things, Rée created the mural "Die klugen und die törichten Jungfrauen" (The wise and the foolish virgins) based on a biblical parable, for the ‘State Commercial and Home Economics School’ on Uferstrasse in Hamburg in 1929 (Bruhns G 139). In 1931 she made a triptych for the chancel of St. Ansgar Church in Hamburg-Langenhorn (Bruhns G 160), the motif was dedicated to the Lord's Supper scene, Jesus' Entry into Jerusalem and the Betrayal of Judas. There are also numerous drawings, watercolors and paintings, such as "Betender" (around 1917), "Madonna" (before 1920) and "Beweinung, Schmerz" (around 1930).

Successful symbiosis: An annunciation scene in modern guise
Her interest in Christian motifs, in biblical writings and legends becomes very clear in the picture offered here - one of her first religiously influenced representations: With strong and rich colors the artist sets a classic proclamation scene with halos, blessing gestures, kneeling, lavish robes and Angel wings in a formally simplified, contemporary view of a small Thuringian town - namely in the middle of the Blankenhain market square with the characteristic nuns’ church St. Anna in the background. Anita Rée had a great admiration for Old Italian Masters throughout her life, which is possibly reflected in the posture of the figures, which are very similar to the posture of the figures in Giotto di Bondone's "Annunciation" (1304-1306, fresco, Arena Chapel, Padua). With the Lamb of God (Agnus Dei), known from the Gospel of John, she visualizes the relationship to Jesus, just like Jan van Eyck and Albrecht Dürer had done before, while the rays of light directed at the figures from heaven illustrate their divine closeness. Maria and the Angel Gabriel are larger than life and almost sculptural in front of the entrance to a simple house. With this depiction, Anita Rée creates a modern annunciation scene which she relocates to the present with brilliant painterly tricks, crating an extraordinary symbiosis of Old Master iconography and her personal experiences, feelings and sensations. With this impressive representation, the use of strong color contrasts and reduced, almost geometric shapes in connection with a traditional art-historical iconography, a sophisticated depth effect, courageous, self-confidently set contours and the extraordinary relationship between figure and space, the artist proves her rank as an outstanding member of the vanguard at the beginning of the 20th century. [CH]

Provenance
This impressive work of art comes from the collection of Fritz Warburg, a brother of the art historian Aby Warburg. It is offered with the expressed consent of the heirs and the family of Dr. Fritz Warburg, whom we would like to thank for the friendly cooperation.
"Fritz Warburg was a German banker born in Hamburg in 1879. In 1908 he married Anna Beata Warburg, born in Stockholm in 1881. They had three daughters, Ingrid, Eva and Charlotte Esther, called Noni. Together with Anna, Fritz Warburg went through Europe's dramatic transformations following the first World War, living in Germany until November 1938, when he was arrested along with 1000 Hamburg Jews and, following his release, moving to Sweden, where he lived until he and Anna joined their daughters Eva and Noni in Israel. His grandchildren who stayed with him in Israel or in Stockholm, or on vacation in Germany's Black Forest, remember him as a tender and kind grandfather who loved to play with them and, together with Anna, continued up to the end to be present in their lives, without ever mentioning what they and Europe had gone through in terms of ethnic cleansing between the two World Wars." (written by Oliviero Spinelli, grandson of Fritz Warburg, November 2020)
More Information
+
Sell
Get a free appraisal for a similar object!
+
Register for
Anita Rée
+
Buying from A-Z
+
Contact a specialist
Share