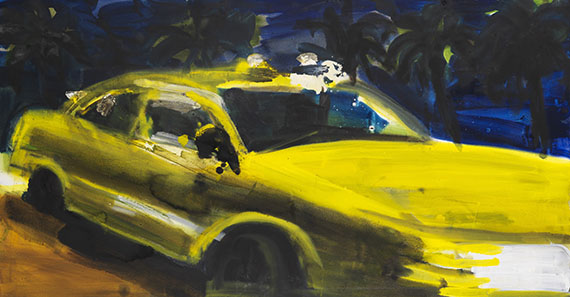 • Extremely racy landscape format that underlines the composition's dynamic appeal.
• From the acclaimed series of the Taxi Pictures.
• Rainer Fetting is one of the most renowned German artists of the past 30 years. The retrospective "Here are the Lemons“, last shown at the 'Museum für Kunst und Kulturgeschichte Schloss Gottorf' in Schleswig, will be on display at the Dortmunder U from November 29, 2020 - March 14, 2021.

This work's authenticity has kindly been confirmed by the artist.

275
Rainer Fetting was deeply influenced by his years as part of the Berlin art scene. His works are clearly marked by the return to expressionist figurative painting, the preference for color as a means of expression and the reduction of objects that are replaced by painting gestures. A DAAD scholarship finally enabled him to stay in New York in 1978: The metropolitan subculture now finds its way into Rainer Fetting's work, homeless people and nudes of mostly dark-skinned men become his main motifs. The works, which were previously characterized by a flat, gestural structure, are now supplemented by dynamic lines and impress with their bright colors. Fetting's sovereign mastery of the artistic means allows him to a powerful use of color and to create the object entirely from the color. The result is an exciting view of things. The artist exaggerates shapes and color values and gives them a new expressive character. The bright yellow taxis, which are so closely connected to New York City, became a pictorial theme in 1991, after Fetting had already spent several years in America. The artist suddenly realized: "This is a good image, simply to make an exciting picture which everyone will identify the city of New York with." (Quote from Jan Hoet, Arie Hartog (ed.), Fetting, 2009, p. 244). The famous Yellow Cabs are, of course, not only typical of New York, as they can also be found in, for instance, South Beach. The cropped image motif with the extreme angle of view and the unusual landscape format underline the streamlined dynamics of the composition. It symbolizes a feeling of freedom and carefree summer nights. Fetting confidently brings this attitude towards life on the canvas in his signature brushstroke. [SM]
More Information
+
Sell
Get a free appraisal for a similar object!
+
Register for
Rainer Fetting
+
Buying from A-Z
+
Contact a specialist
+
Rainer Fetting Biography
Share