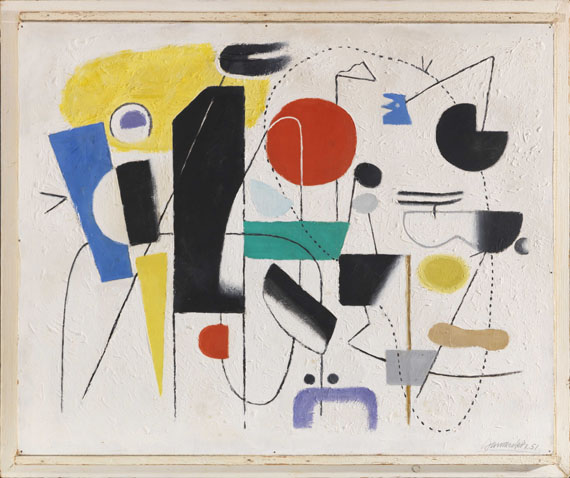 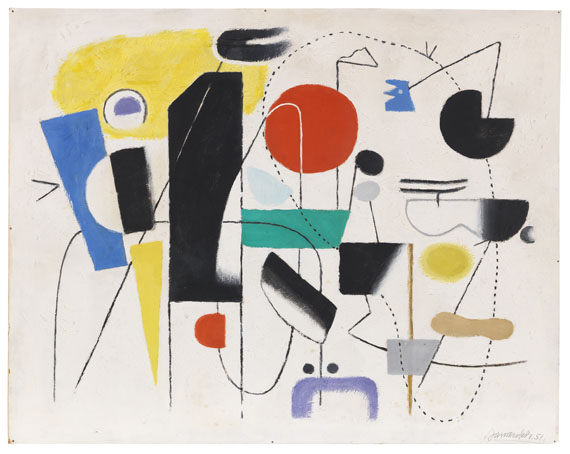 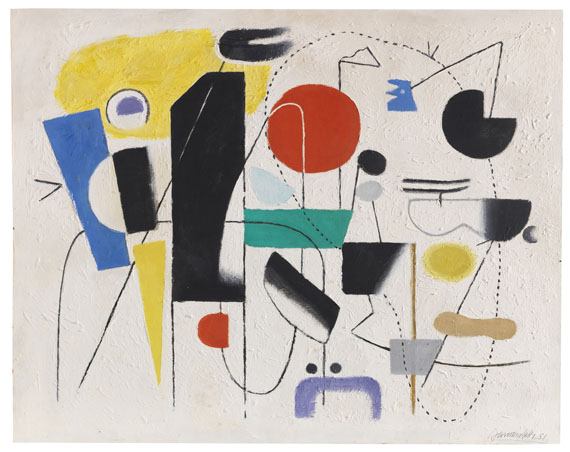 We are grateful to Felicitas Baumeister and Hadwig Goez, Archive Baumeister, Kunstmuseum Stuttgart, for the kind support in cataloging this lot.

PROVENANCE: Collection Eline and Maxwell S. McKnight, Scarsdale/New York (inscribed with the collectors' names on the reverse by a hand other than that of the artist).
Private collection (acquired from the above in 1979, Galerie Wolfgang Ketterer, November 26, 1979).
Ever since family-owned.

LITERATURE: Will Grohmann, Willi Baumeister. Leben und Werk (with catalog raisonné), Cologne 1963, cat. no. 1281 (with illu.).
Galerie Wolfgang Ketterer, Munich, 36th auction, November 26, 1979, lot 137, p. 33 (with color illu.).
"In my eyes, the name Baumeister occupies an extremely important place among the modern German artists. In fact, if you look at his work, Baumeister represents German art of an international character. His artistic development was always closely related to art of all times and people - from the Assyrians to Paul Klee, Kandinsky and Miró. And he [..] resolutely went a very independent and characteristic path. "
Fernand Léger, in: L’age Nouveau 44, Paris 1949, quote from: Ex. cat. Willi Baumeister, Kunstverein Brunhwick, 1977, p. 44.

With his diverse work cycles, some of which running parallel, and continuously developed abstractions, Willi Baumeister had received great international recognition even before the war. Influenced by contemporaries such as Oskar Schlemmer, Baumeister found his own way into abstraction during these years. In 1930 he exhibited for the first time at the 27th Venice Biennial. The post-war period can thus be described as another high point in the artist's career. In 1955, 1959 and 1964 he exhibited at documenta 1, II and III, and in 1948, 1952 and 1960 he was represented at the Venice Biennial. In 1957, Baumeister's works were presented in the large overview exhibition "German Art of the Twentieth Century" at the Museum of Modern Art in New York. With its ‘fragment character‘ this work from the "Mogador" cycle (1950/51) references the "Afrika" pictures largely because of a similar arrangement of the figures, the dark, sharply contoured symbols, the light background applied in spatula technique and the cheerful colors. Baumeister connects the manifold shapes in strong, rich and fresh colors, sometimes with soft and delicate borders but also with sharp contours, with filigree, at times dotted lines and sets the luminous elements against a white background - similar to planets and star constellations within a cosmos. With a completely de-individualized canon of forms and the same, undeviating consistency as, for example, Fernand Léger, Baumeister created an imposing oeuvre that is also symptomatic of the German post-war period. With its particularly clear expression, the work offered here visualizes this timeless image effect in an utterly astonishing manner. [CH]
More Information
+
Sell
Get a free appraisal for a similar object!
+
Register for
Willi Baumeister
+
Buying from A-Z
+
Contact a specialist
+
Willi Baumeister Biography
Share