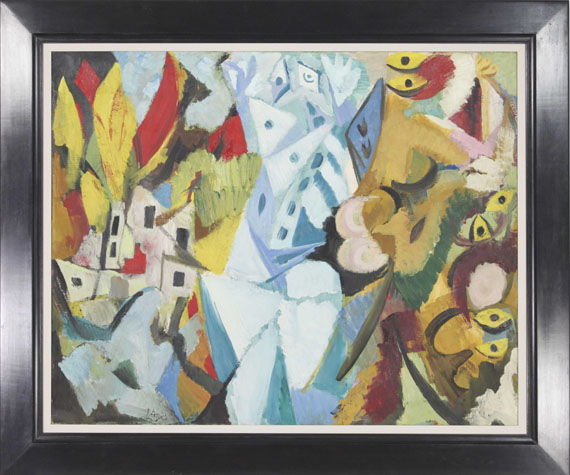 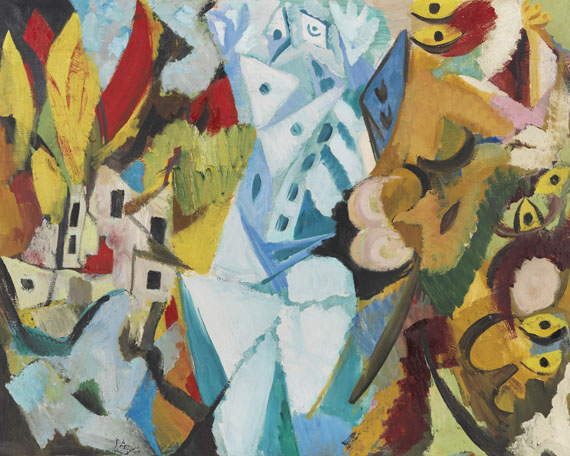 • High-quality painting from the climax of the "Hekate-Bilder", which mark Nay's transition from abstracted figuration to pure abstract pinting.
• In terms of complexity, coloring and compositional balance, no comparable work has been offered on the international auction market in the past ten years.
• This work has not been exhibited in public since 1950.
• Comparable "Hekate" paintings are in possession of, among others, the Pinakothek der Moderne, Munich, the Nationalgalerie Berlin, the Sprengel Museum, Hanover, and the Museum Ludwig, Cologne.

LITERATURE: Karl & Faber, Munich, auction 158, November 16, 1981, lot 1540 (with illu. on plate 15).
Weltkunst, 52nd year, issue 1, Munich, November 1,1982 (with illu. on p. 48).
"Lots Weib was painted when Nay was at the height of his power, brilliantly synthesising a modernist lexicon of form with a strong feeling of the embattlement of contemporary life in Germany in the late 1940s.'"
John-Paul Stonard, British curator and publisher of various monographs
"Painting means forming a picture from colors, the color is the esence of painting, an expression of reclaimed nativeness.“ Ernst Nay, quote from: A.Scheibler, Ernst Wilhelm Nay: Catalog raisonné of oil paintings, vol I, p. 224.

Unusual color mixes emerge and deepen a highly differentiated coloring
For Nay, the preoccupation with abstractly structured surface fabric is a logical consequence of the steadily increasing compression of the figurative image structures in the "Hekate-Bilder". Embedded in this consideration is the idea to design the “complex of archetypes in connection with rhythm and dynamics” so openly that, according to Nay, “the actual formal theme of my art as a whole” can develop. (Exhibition cat. E.W. Nay 1902-1968. PBilder und Dokumente, Nuremberg and Munich 1980, p. 62) Basically, apart from the surreal landscapes, the first real Nay theme, Nay's artistic development is always subject to rhythm and dynamics, for example in the clearly structured "Fischer" and "Lofoten" pictures, which simplify the objectivity, to the abstractly structured "Hecate pictures", compositions created in France which still show traces of figuration. Here one encounters the meanwhile established forms and figurations of Nay's iconography, with which Nay strives, as Werner Haftmann so aptly describes, “to actually separate the individual colored surface layers, to isolate them as individual qualities and to work through them as independent elements in the spatial order, but also to define them as isolated color voices ”(Werner Haftmann, EW Nay, Cologne 1991, p. 153).
The peak of the "Hekate" pictures
The examination of the story of Lot's wife, who was not allowed to turn around while fleeing Sodom, seems to have connected Nay with his own inner story. Unlike her he does not only look ahead in compositional terms by developing ingenious combinations of "colored surface layers" with "isolated color moods". Mixtures of colors that have not yet been used appear and deepen a highly differentiated coloring. The application of paint, sometimes slightly impasto, intensifies a peculiarly precious relief effect, as if it were a very strange structure: on the left the city of Sodom, on which the devastating fire poured by God falls; in the middle, the woman in cold shades of blue, solidified into a crystalline pillar of salt; beside her, in a relaxed motion, Lot, driving the two children in front of him, just as the sent angels urge him him to hurry. By stretching the forms, Nay promotes two-dimensional tension, increases the load-bearing capacity and the speed. Despite the sad end of the legend, a woman turned into a pillar of salt because she took the forbidden look back , Nay rendered a painting full of bright beauty and radiant colors, while the open element of the tragedy can also be felt in this large-format picture.
The denomination "Hekate Pictures"
Elisabeth Nay-Scheibler reports that the term “Hekate-Bilder” was created much later. When Nay was already turning to new topics, the “Fugale Bilder” in 1950/51, his reliable friend and mentor, Ernst Gosebruch, long-time director of the Folkwang Museum in Essen who had been dismissed by the National Socialists in September 1933, visited him. He inquired about the pictures made in Hofheim, of which he only remembered the title of one: "Tochter der Hekate" (Daughter of Hecate). This way a stylistic denomination for the creative period from 1945 to1948 was created. Nay, who spent the war years in France as a cartographer, was released by the Americans to post-war Germany, was looking for a new beginning, but not in Berlin, as his studio there no longer exists. Near Frankfurt, in Hofheim am Taunus, the artist and later gallery owner Hanna Bekker vom Rath helped him to stay in Ottilie Roederstein's studio. The images that emerge there appear exasperated, they agitate the observer their violent gestures and burning colors, and can be regarded as particularly convincing for an incessantly pursued formal strategy. The contradictions in his personal fate, it seems, stimulate Nay to a previously unknown intensity. In a figurative sense, Nay's "Hekate-Bilder" from the first years after the war can be understood as works in which he expresses the gloomy memories in formal manner, while his titles allow for a tiny glimpse into the mysterious process of artistic activity. The artist replaces the still figurative inventions from France with themes from literature, Greek mythology and the Old Testament. The titles, which Nay gave to most of his paintings only after completion, have changed: Verkündigung (Annunciation), Paolo and Francesca, ochter der Hekate, Sibylle, Oberon, Salome, Eurydice, Hirte, Herbstlied, Kythera und Lot's Weib. The recurring vocabulary of forms of circles, spindles, chessboards and hand shapes in Nays pictures is visibly woven into mostly encrypted associations of figures and landscapes in the "Hekate" pictures. In addition, portentous names give the "Hekate” pictures" a mythical sound. [MvL]
More Information
+
Sell
Get a free appraisal for a similar object!
+
Register for
Ernst Wilhelm Nay
+
Buying from A-Z
+
Contact a specialist
+
Ernst Wilhelm Nay Biography
Share