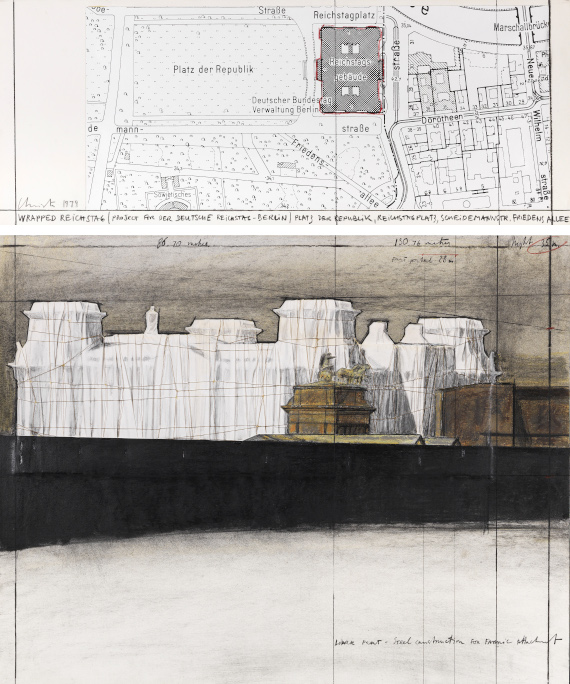 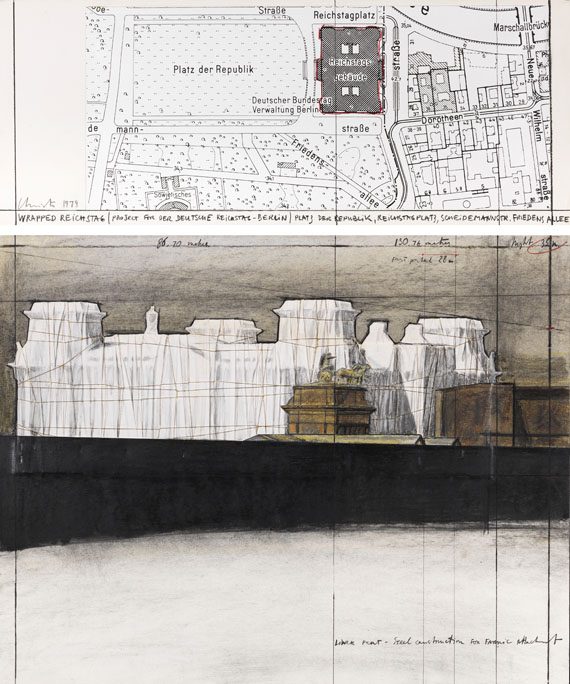 We are grateful to Mr Matthias Koddenberg, Studio of Christo and Jeanne-Claude, New York, for his kind support in cataloging this lot. The work is registered at the archive.

The plans of the artist couple Christo and Jeanne-Claude to wrap the Berlin Reichstag building go back to 1972. The project was conceived and had been meticulously thought-out in many drawings and collages, although its realization remained unclear for a long time. Christo became fascinated with the project when he saw the lonely Reichstag building near the at death strip between East and West Berlin on a postcard in 1971. He promoted his "Project for Berlin" for over twenty years, but the public and political discussion over the ambitious wrapping project lasted for years. The ephemeral work of art was eventually realized in the summer of 1995, after the Federal Parliament in Bonn decided in favor of the project by a close cote at the end of a heated debate. The unique action in which a national monument became a temporary work of art and ultimately - a few years after reunification - an impressive symbol of German unity, aroused much admiration and public attention. Following the legendary wrapping event the German Parliament finally moved from Bonn to Berlin, making the historic walls the parliamentary center of the united republic. The early, two-part collage shows how meticulously Christo prepared the run of the custom-made fabric, the linking of the ropes and the drapery of the fabric as early as in the 1970s. What is also special about this work is the interesting perspective which shows the cropped Quadriga on top of the Brandenburg Gate in front of the glowing white of the covering fabric, thus once again recalling the special political significance of the monumental action. Thanks to the impressive combination of fabric, strings, collage and drawing, the special tactile presence of Christo's temporary actions is preserved can be experienced permanently. [JS]
More Information
+
Sell
Get a free appraisal for a similar object!
+
Register for
Christo
+
Buying from A-Z
+
Contact a specialist
+
Christo Biography
Share