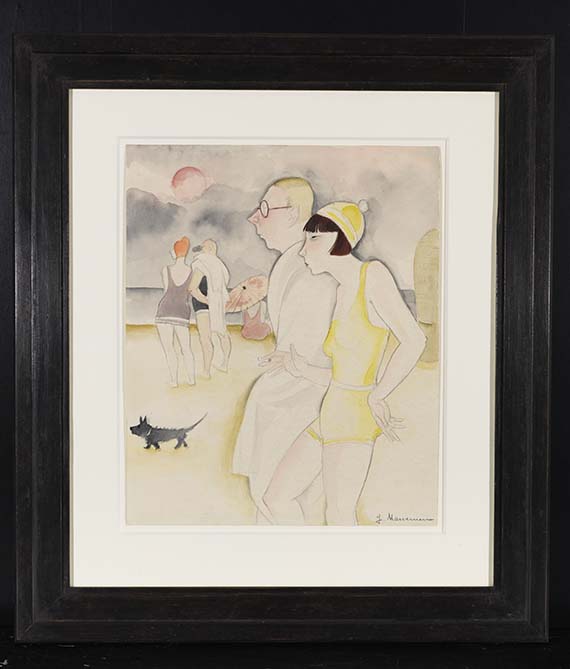 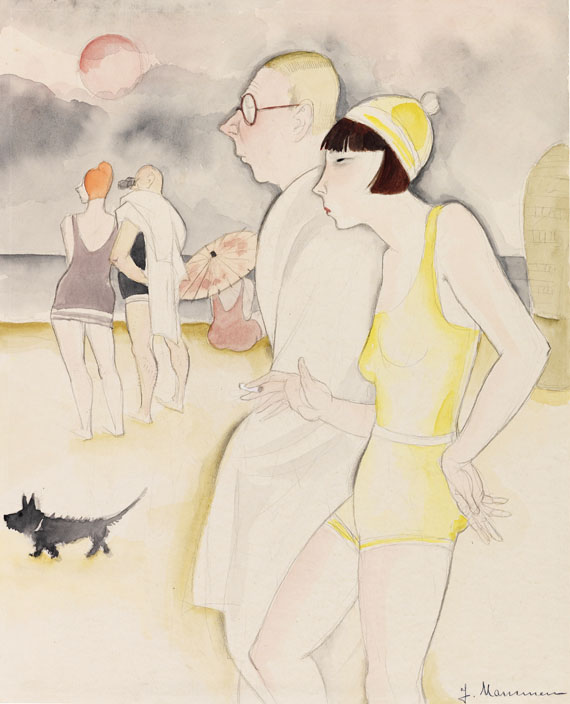 • First published in the magazine "Jugend" in 1930.
• This work adorned the cover of the exhibition catalog of the grand Jeanne-Mammen retrospective at the Berlinische Galerie, Museum für Moderne Kunst, in 2017.
• Up until October 18, 2020 the work was part of the exhibition "Umbruch" at Mannheimer Kunsthalle.
• Pointed artistic comment on the addiction to pleasure characteristic of the Weimar Republic around 1930.
• Typical 1920s motif showing the then popular female type.

LITERATURE: Jugend, issue 27, 35th year, July 1930, p. 422 (with black-and-white illu.).
Förderverein der Jeanne-Mammen-Stiftung e.V., Berlin (publisher), Jeanne Mammen. Paris Bruxelles Berlin, Munich 2016, p. 55 (with full-page color illu.).
"The delicate airy watercolors she published in magazines and comic papers are so much better than the undisciplined smearings of most of her fellows that they deserve a little declaration of love. Her figures feel neat and clean, they are both gracious and a little harsh, they come jumping out of the picture neck and crop."
Kurt Tucholsky, 1929, quote from: Klara Drenker-Nagels, Die zwanziger und frühen dreißiger Jahre, in: Jörn Merkert (editor), Jeanne Mammen. Monographie und Werkverzeichnis, Cologne 1997, p. 43).

As early as in 1997, the year of the first retrospective of Jeanne Mammen's work, the belated appreciation of the artist, who had died more than 20 years before, was referred to as her "resurrection". But especially today, another 20 years later and in the course of a comprehensive re-evaluation of the contributions female artists made to art history, the work of the Berlin native once again moves into the focus of museums, institutions and the art trade. In 2008 the Paula-Modersohn-Becker-Museum in Bremen dedicated a solo exhibition to her, followed in 2017 by a large retrospective at the Berlinische Galerie in Berlin, in which the work presented here was also prominently exhibited. The artist is considered a chronicler of the Berlin society in the Weimar Republic of the 1920s and early 1930s. With keen observation, irony, empathy and humor, as well as with a little mocking exaggeration, she portrays the people of the big city, their weaknesses, their strengths and their relationships with one another. She finds her main subject mostly in the role of the modern woman, which she often - as in the work offered here - almost typifies, with a fashionably short cut, black-dyed bob, elaborately made-up"cat eyes" and red lips.
Mammen depicts the young lady in a lemon-yellow swimsuit, trudging through the sand so self-confidently, in stark contrast to the beige-veiled spectacle wearer who accompanies her, with his standard hairstyle he- unlike her - doesn't seem to fit into the contemporary chic Berlin. Mammen spent most of her youth in Paris and Brussels. Due to the events of the First World War, the German family Mammen had to leave France and relocated to Berlin. Her father's fortune was confiscated and so Jeanne earned a living with illustrations and drawings, initially for fashion magazines, later also for the magazines "Uhu", "Ulk", "Querschnitt" and "Simplicissimus". The works from the Berlin period around 1930, to which the present work belongs, coined the artist's reputation up until today. "Their artistic and intellectual historical significance is largely due to the fact that they provide precise information about the German mentality of the thirties and forties, without sentimentality, rather on the edge of sarcasm, but without deviating from the truth in the depiction of the events." (Eberhard Roters, in: Jeanne-Mammen-Gesellschaft (ed.), Jeanne Mammen 1890-1976, Stuttgart 1978, p. 63). In our work, too, the artist captures the zeitgeist of the society of the time on paper with clear lines, finely coordinated colors of pale pastel tones and strong color accents as well as the usual mocking humor. During this time, Jeanne Mammen liked to visit German and Belgian beach resorts like Ostende and De Panne, where she observed bathers from all walks of life trying to escape everyday life a little in view of the increasing political radicalization and worsening economic situation, looking for light-heartedness, pleasure and happy moments spent together outdoors. It is obvious that Mammen's works from these days are far less political than the works of her male colleagues. She expresses her criticism in a much quieter, more subtle manner - in the depiction of joyless, tense interpersonal relationships, as well as through the almost caricature juxtaposition of modern big city coolness and the ugliness of the oversaturated bourgeoisie. [CH]
More Information
+
Sell
Get a free appraisal for a similar object!
+
Register for
Jeanne Mammen
+
Buying from A-Z
+
Contact a specialist
Share