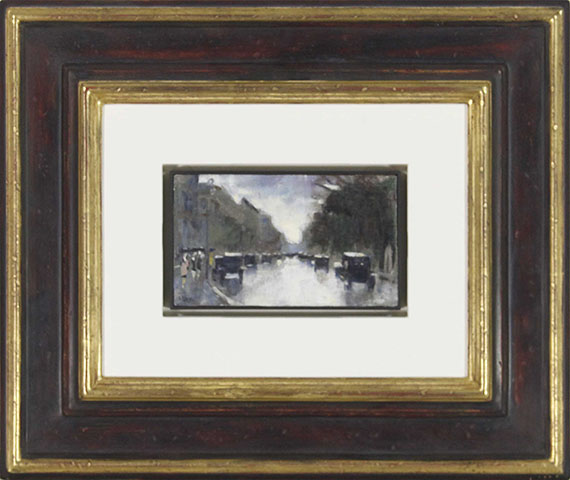 • Characteristic motif in the artist‘s oeuvre
• Atmospheric depiction of big city life around the turn of the century
•Within the group of the Berlin street scenes this is a particularly light-flooded example
• Due to the small format the work is reminiscent of photographic snapshots.

Accompanied by a photo expertise issued by Dr. Sibylle Groß, catalog raisonné Lesser Ury, on October 27, 2010 (in copy). The work will be included into the forthcoming catalog raisonné.

"Ury was the first to paint Berlin street pictures: the modern street with its chasing and hissing, its busy little people, its sedate horse-drawn omnibuses, its old-fashioned hackneys, the city street at dusk with all its lovely reflections of the sun against houses and asphalt [.]. Yes, Ury was the first to paint modern Berlin. " Art historian and critic Adolph Donath, in: Lesser Ury, Seine Stellung in der Modernen deutschen Malerei, Berlin 1922, p. 14.