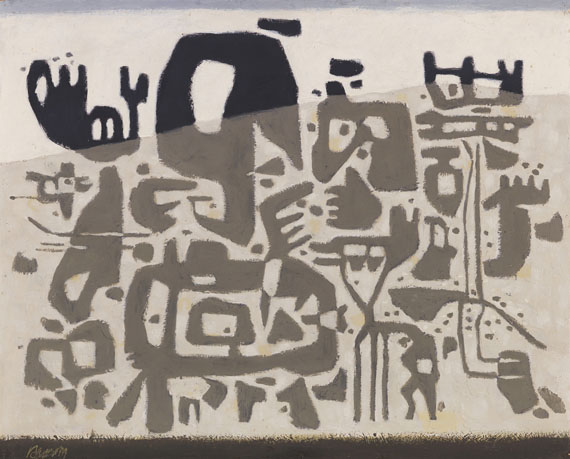 enlarge image
+
120002360
Willi Baumeister
Relation, 1950.
Oil with synthetic resin on fiberboard
Estimate:
€ 60,000 - 80,000
$ 70,200 - 93,600
Lot description
Relation. 1950.
Oil with synthetic resin on fiberboard.
Beye/Baumeister 1709. Lower left signed. Verso signed, dated "1950 (1944)", titled and inscribed a well as with the artist's studio stamp. 65 x 81 cm (25.5 x 31.8 in).
Based on drawings from the "Afrika" series, which can be dated to 1942, cf. Ponert, no. 797 and no. 798. The year date "1944" in brackets on verso must also be seen as a hint from the artist regarding an earlier fundamentally new form-finding. Even though the work differs, owing to its reduced coloring, from the later, more colorful "Mogador" pictures, the painting anticipates elements such as the clustered forms found in these later works, which is why the work by Grohmann and Beye/Baumeister, allocated to the "Afrika" pictures, is also listed as initial work of the "Mogador" series.
• A similar work from the complex of the "Afrika" pictures is part of the collection of the Museum of Modern Art, New York (Beye/Baumeister 979)
• Virtouso composition that marks the transition from the more structured "Afrika" pictures to the form findings of 1950s and works from the famous "Montaru" series markiert
• Shown at the legendary first exhibition of the artist group ZEN 49, which is considered the point of origin for key positions of post-war abstraction
• The clearly contoured paintings from the 1950s are among Baumeister's most sought-after creations on the international auction market.

Essay
Baumeister's abstractions are the result of intensive thinking and development processes. With the inspiration of Cézanne and the influence of contemporaries like Schlemmer, Baumeister eventually found his very own gateway into abstract art through an artistic examination of prehistoric and non-European image worlds. Baumeisters entire repertoire of expressive forms is rooted in figuration.
Willi Baumeister developed and varied his motifs in series of pictures and always worked on various image cycles at a time. The emergence of the African pictures, among which this radiant work here counts, began during World War II and belonged to the main series of these days. In January 1942 Baumeister mentions a small picture with an African ornamentation for the first time, in February that year the artist even called it an "African epoch". Baumeister developed an interest in rock art from the early 1930s on and deepened it through his close connections with the Frobenius Institute, a cultural anthropology research institute at the Frankfurt University. Baumeister’s ornamentation surely shows parallels to African models, however, in the end Baumeister's pictorial language is owed to his very own idea of Africa; it's the painter's Africa that we see in front of us in his unique compositions: Will Grohmann called it "Imago" - the inner picture. What the works from the famous Africa series have in common are the dark, clearly contoured pictorial symbols silhouetted against a light ground applied with a palette knife. The special treatment of the background creates a volitional restlessness that shows clear parallels to prehistoric rock art, it also provides the basis for Baumeister's picture language which had become largely emancipated from its original source of inspiration. Emanating from the forms characteristic of the important "Afrika" pictures Baumeister forms of the 1950s show stronger contrasts, they increasingly differ in size and weighting and also begin to mysteriously superimpose. This step, decisive for Baumeister's late period of creation, becomes obvious in this work offered here. Baumeister experiments with a grayish overlay that seems to move over the composition from the bottom up while he also puts emphasis on the black structures in the upper part. This creative means eventually becomes the decisive element of composition for the "Montaru" paintings made between 1953 and 1955, in which black structures increasingly spread out across the canvas. [JS]
More Information
+
Sell
Would you like to sell a similar object?
+
Register for
Willi Baumeister
+
Bidding Options
+
Bid by telephon / written
+
Buying from A-Z
+
Catalogue Order
+
Contact a specialist
+
Willi Baumeister Biography
Share 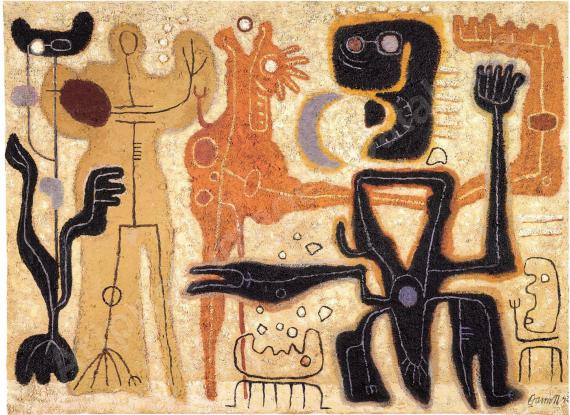 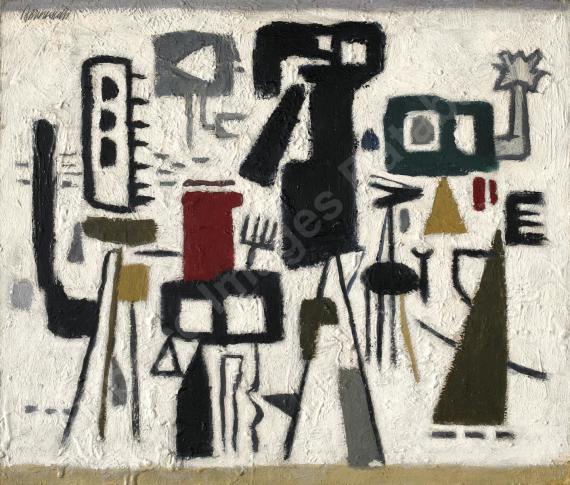 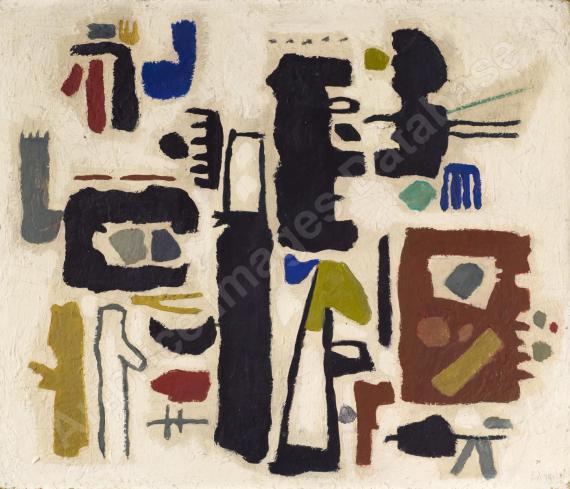