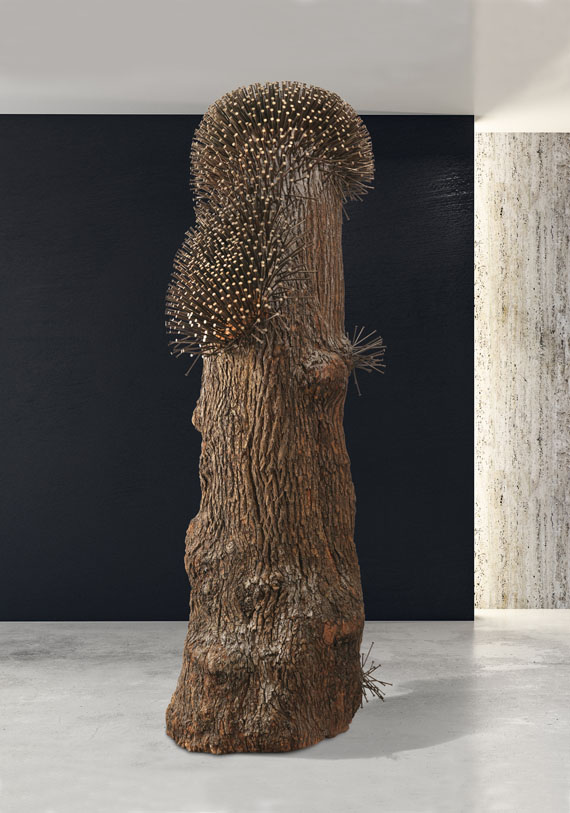 • The sculpture was made in context of the campaign "Kunstpranger" (Art Pillory) and is the first nail tree ever made.
• The most monumental nail tree ever on the market.
• Part of Deutsche Bank Collection since it was made.

The work is registered in the Uecker Archive with the number GU.83.046 and is earmarked for inclusion into the forthcoming Uecker catalog raisonné.

The "Kunstpranger" (Art Pillory) is one of Günther Uecker's most famous sculptures. In an action with the Wuppertal gallery owner Annelie Brusten, whom he met in 1979 during the academy tour in Düsseldorf, he created a memorial for the destruction of the environment. An elm tree infested with bark beetles was chopped down in Klophaus Park, but Uecker conserved it as a work of art. The idea came up in the autumn of 1983 when Annelie Brusten happened to notice the forest workers in the park marking the 80-year-old elm. She learned that the sick tree had to be taken down. Annelie Brusten called the well-known "ZERO" artist and academy professor to Wuppertal: Uecker came, marked an approximately 3 meter long section on the trunk and Uecker's student Herbert Koller photo-documented what happened next. In a pavilion in the park Uecker stood on a ladder and worked on the mighty trunk for ten days, equipping it with a defensive crown of carpenter nails. He used a total of around one thousand nails weighing 130 kilograms for this work of art. He mixed the ashes of the burned treetop with glue, as a kind of healing ointment, with which he closed the tree’s wounds. This was the first tree ever that Uecker performed his nailwork on. The sculpture "Kunstpranger" (Art Pillory) remained in the park pavilion as an exhibition of the same name by the Annelie Brusten gallery and was dedicated to forest dieback - a problem that was more topical than ever at that point. In his speech on occasion of the opening of the exhibition, Uecker decried the destruction of the environment by man and declared the nails to be "armor" with which he "equips the tree, in order to make it strong". Herbert Koller's photographs, along with Uecker's handwritten thoughts, were included in the small exhibition catalog "Kunstpranger", which Annelie Brusten would later publish in an edition of 35 multiples in slipcases, each with a nailed tree disc and a charcoal drawing of the elmtree, turns the creation of the work of art into a kind of performance. With the help of the then director of the Von der Heydt Museum, Günter Aust, Annelie Brusten sold the "Kunspranger" to the Deutsche Bank Collection after four months. The new acquisition was presented in the lobby of its Wuppertal branch for over 20 years. The nail tree became a theme in Uecker's oeuvre that the artist would not let go. In 1984 he made an eight-part fores, a second and third one followed 1988 and 1991. Günther Uecker remained an artistic commentator on current events in the world, he lives in the present and makes contributions to the issues of our time. "Art cannot save people, but with the means of art a dialogue becomes possible which calls for actions that will then protect people." (Günther Uecker, 1983, quote from: Kritisches Lexikon der Gegenwartskunst, p. 2) His works are witnesses to the urging questions of their days and an artistic protest against destruction and annihilation. [SM]
More Information
+
Sell
Get a free appraisal for a similar object!
+
Register for
Günther Uecker
+
Buying from A-Z
+
Contact a specialist
+
Günther Uecker Biography
Share