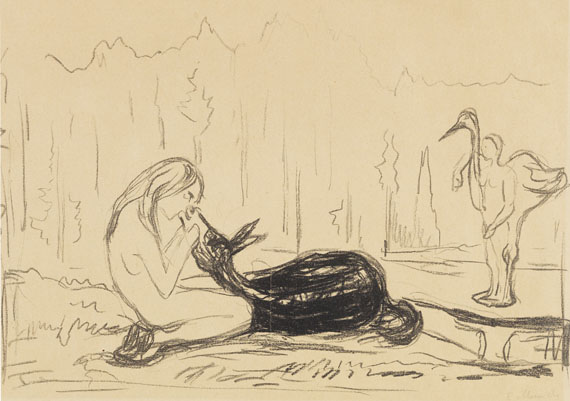 "My most accomplished creation ever" Munch about "Alpha und Omega" (quote from a diary entry by Ludvig Ravensberg from Januar 9, 1910, in: Edvard Munch. Alpha & Omega, published by Eggum/Woll, Oslo 1981, p. 53)

Munch had the idea for "Alpha and Omega" as early as in the mid 1890s when he made a couple of drawings for this theme. He only got back to it after a hospital stay in Copenhagen in autumn 1908 and began to work on the portfolio of lithographs. "Alpha and Omega" (Woll 336-357) comprises 18 lithographs, title sheet, table of content, two opening vignettes and two text sheets in Norwegian and French. [SL]