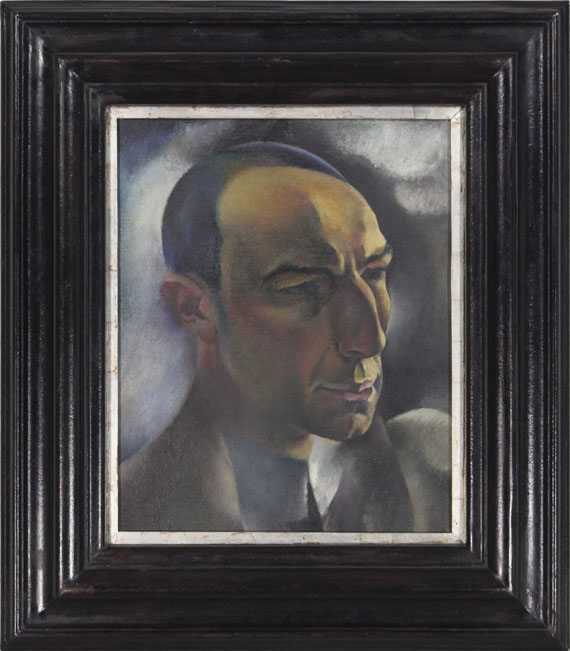 • Wonderful work from the small yet remarkable oeuvre of the rediscovered Rhenish Expressionist Hanns Bolz.
• Bolz` paintings were shown at the leading vanguard galleries of Alfred Flechtheim in Düsseldorf and Hans Goltz in Munich and were also shown at Herwarth Walden's legendary "1. Deutschen Herbstsalon"(1913) in Berlin.
• As the early deceased artist destroyed most of his art before his death, only very few works are still in existence today.
• To date only 23 paintings by the artist have been offered on the international auction market.

The early deceased Hanns Bolz was one of the Rhineland's great expressionist talents. It was not until the 1960s that art historical research slowly began to digthe name Hanns Bolz out of oblivion. However, a comprehensive examination of his work is difficult as onlya small number of works have survived, since Bolz decreed the destruction of his work in his will, and he himself had also destroyed most of his work before his death. Hanns Bolz presumably graduated from the Düsseldorf Art Academy around 1905/1908. He then went to Paris where he spent most of the time until the outbreak of the war. He renteda studio on Montmartre, 49 rue Gabrielle, which hadpreviously been used by Pablo Picasso. He was a regularat the Café du Dôme and soon belongedto the small German artist colony that had become established there around Purrmann and Levy. This must have also been the point, at the latest, that he met the art dealer Alfred Flechtheim, who for the first time showed works by the illustrious and very heterogeneous circle of the "Dômiers" in his gallery in 1914. During his lifetime Bolz exhibited at the art dealers Hans Goltz in Munich and Alfred Flechtheim in Düsseldorf, both of them are considered pioneers of Modernism. In his painterly work the occupationwith French Cubism and Fauvism is clearly evident. Our portrait, which very likely shows the famous modernist art dealer Alfred Flechtheim, was probably made duringthe first years inParis. The characteristic physiognomy of the sitter is striking: the large, distinctive nose, the receding forehead, the pointed chin and the large mouth with the full lips. The lighting from the back gives the energetic facial features a special conciseness. Typical of Bolz's work is the subdued color palette and the cubist-influenced treatment of light and shadow, through which he attains a juxtaposition of light and dark image zones with gentle modulations and transitions. Hanns Bolz was represented inall important exhibitions of his time. He took part in the Sonderbund exhibition in Cologne in 1912, the Armory Show in New York and Chicago and in Herwarth Walden's "First German Autumn Salon" in Berlin in 1913. In 1914 the artist was drafted for military service and suffered severe gas poisoning that left him partially blind. Bolz was released early and died in the Neuwittelsbach sanatorium near Munich in 1918 as a result of his war injury. In 1922, the Alfred Flechtheim gallery showed a commemorative exhibition with 30 paintings by the Rhinelander gallery under the title "Hanns Bolz. In Memoriam". This shows how that the today nearly forgotten artist was once highly valued. [JS]
More Information
+
Sell
Get a free appraisal for a similar object!
+
Register for
Hanns Bolz
+
Buying from A-Z
+
Contact a specialist
Share