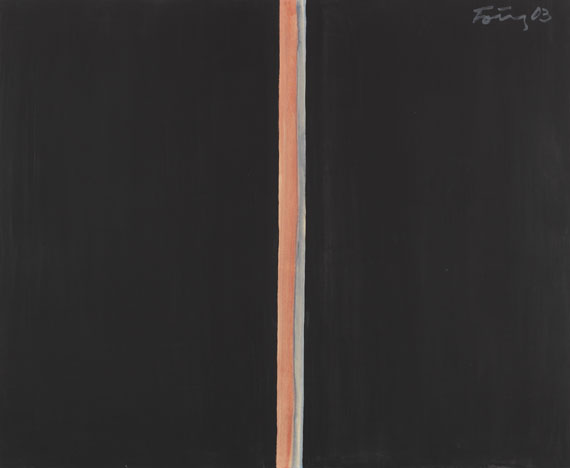 • Wonderful large-size homage to Barnett Newman, the founding father of Color Field Painting.
• Förg's painting unites two seemingly opposite traits: the composition's geometric strictness and the gestural spontaneity of a vibrant color application.
• Günther Förg's large-size color fields are part of many internationally acclaimed collections, including the MoMA, New York, the Städel, Frankfurt a. M., the Stedeljk Museum, Amsterdam, and the San Francisco Museum of Art.

We are grateful to Mr. Michael Neff of the Estate Günther Förg for his kind confirmation of this work's authenticity. The work is registered at the archive with the number WVF.03.B.0165.

"If you spend a lot of time thinking whilst painting, things get complicated. Sometimes I paint a picture and have a problem with it. Then I step back a little, observe it, and then select a blue color and continue painting with it. I don't reflect on whether I should paint with this color, I just instinctively grab blue. And that is quality."
Günther Förg, 1997

Günther Förg's work is a devotion to color, the relentless attempt to work out its own life and its almost infinite wealth of variation through ever new combinations. His painting effortlessly brings together what is seemingly irreconcilable, it brings elements of concrete art together with gestural elements: geometric rigor meets expressive spontaneity, a calculated system meets the spontaneous intuition of the application of paint. Förg, who had based his paintings, at the most, on rough construction sketches well into the 1980s, and whose work always consisted of a single layer of paint, once stated in an interview with Siegfried Gohr: "There is no waste with my pictures, not with lead painting, either, because, if necessary I decide very intuitively; for example, just to use any color I paint something in curry, but if it won't work at all, I just a purple next to it and save the picture. " (G. Förg, quote from: G. Förg in a conversation with Siegfried Gohr, Cologne 1997, p. 41). Regardless of whether it is his serial works, his grid pictures, lead pictures or his later large formats, Förg's painting must work out at once, the visual event must be realized with just one layer of paint and in one go. Again and again, Förg's painting seeks a stylistic discussion with other artists. In addition to influences from abstract pre-war Modernism, Constructivism and Suprematism, the work of th early deceased Blinky Palermo, played a formative role for the art student Förg in the 1970s. Later, American Action- and Color-Field-Painting, such as the work of Willem de Kooning, Clifford Stills and Barnett Newman became additional sources of inspiration. Förg adapts and transforms what he sees, thus repeatedly using new color and form impulses for his own multi-faceted work. Accordingly, in our large-format canvas it is Newman's iconic "Zip-Paintings” and thus the legendary beginnings of modern, color-based painting which Förg references visually. The vibrant black, only divided by two narrow verticals, can be understood as a kind of homage to the American's significant contribution to art history. Förg's nuanced, vibrant color scheme is common to all of his works, which he once described as follows: "Technically, I go into the next color with the brush to avoid monotony in the palette, and to allow for some kind of richness. If you have, lets say, gray and you add a flesh tint to it, you initially have a mixed color but gradually get a tone that is more and more flesh-colored. " (G. Förg, quoted from: G. Förg in a conversation with Siegfried Gohr, Cologne 1997, p. 43). In 2014 the Museum Brandhorst, Munich, presented a first posthumous overview of the artist's work. In 2018, the retrospective "Günther Förg. A Fragile Beauty" followed, it was shown at the Stedelijk Museum, Amsterdam, and the Dallas Museum of Art. Förg's paintings are in numerous international museum collections, among them Museum of Modern Art, New York, and the Pinakothek der Moderne, Munich. [JS].
More Information
+
Sell
Get a free appraisal for a similar object!
+
Register for
Günther Förg
+
Buying from A-Z
+
Contact a specialist
+
Günther Förg Biography
Share