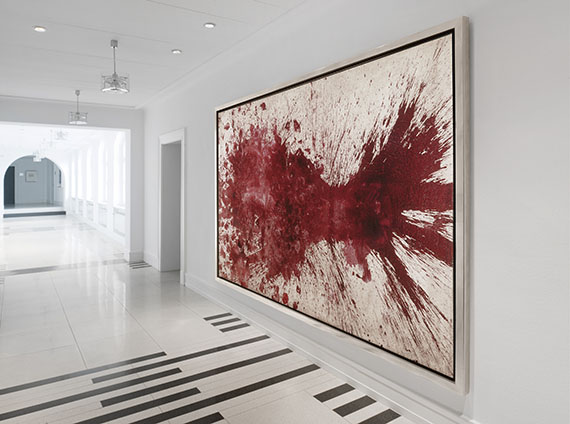 • This process-like downpour is a special work by the artist not only for its physical size.
• "Red is the one color that is most intensively noticed, as it is the color of life and death at the same time", according to Hermann Nitsch.
• Downpour pictures by Nitsch from this early stage of the work period around 1960 and in this size are extremely rare
• Part of the collection for more than 35 years.

Accompanied by an expertise issued by the Atelier Hermann Nitsch on December 10, 2020.

Along with Günter Brus, Otto Muehl, and Rudolf Schwarzkugler, Hermann Nitsch is one of the keyprotagonists of "Wiener Aktionismus" (Viennese Actionism). In contrast to the painter Adolf Frohner, Hermann Nitsch’s development took an entirely different course after the first joint action in 1962. His untitled red "Schüttbild" from 1961 illustrates a completely different approach than the painting byRainer, Platschek or Frohner from around the same time. Ultimately, Nitsch's pictures are all connected to hisidea the “Orgies Mysteries Theater”, which the artist conceived in the mid-1950s. Born in Vienna in 1938, Nitsch increasingly turned to art during his training as a commercial artist, which he began at the local ‘Graphische Lehr- und Versuchsanstalt’ in 1953. At around 1955 we find drawings froma talented student who became occupied withreligious themes and the art of the Old Masters at a very early point. He made rapid progress and reached an unusually high level of mastery in drawing. With great enthusiasm for masters like Rembrandt or Grünewald, the precise recording of their artistic intentions, the artist soaked up their stylistic characteristics in his figurative early period of creation takes. Although Impressionist painting always inspired him to agreat extent, it had little impact on his artistic development - with the exception of Cézanne. He felt more deeply impressed by the expressive from the start, not Expressionism as a style, but as a timeless meansof expression. As an emergingartist Nitsch recognizedthe form as something "virtuoso", while he hadto be convinced by the content. Nitsch completed hisapprenticeship in order to devote himself to philosophy and language studies. It was not before1960 that he began to examine Informalism, which would hence open up the painterly and graphic discourse of the "Orgies Mysteries Theater" which he had conceived literarily in 1957. The encounter with the psychoanalyst and theologian Josef Dvorak, co-founder of the "Wiener Aktionisten", as well as with the artists Rainer, Schwarzkogler, Muehl and Brus led tovarious spectacular actions between 1960 and 1966. Nitsch was sentenced to prison three times, prompting him to leave Austria in 1966; until 1978 he livedin Germany. In 1971 he acquired Prinzendorf Castle in Burgenland, where he hasbeen realizing multi-day plays in his Dionysian-Apollonian theater since 1974. The basic human conflicts that have been handed down in myths and legends are staged through new rituals that Nitsch invents and in which old cults deliberately resonance. The processuality of informal painting also served him as stimulus. In the later 1960s Nitsch organized the so-called “Theatralische Malaktionen” (theatrical painting actions)together with the artists Otto Muehl and Adolf Frohner, which were substantially inspired by American Action Painting and painting events found in Tachism. Nitsch pours red paint over hardboard panel and large canvases- as it is the case with this work here - creates color flows, allows drops to form, he splashesand grinds. "Red is the color that is most intensely noticed, because it is the color of life and death at the same time", says Nitsch. After 1961, the color was replaced by blood and the canvas by sheets. He worked with animal innards and carcasses, but people involved in the creation process were also part of his "painting means". This process-like pouring is not only a special work because of its physical size, but also because it marks the beginning of the artist's philosophical extravagance, which shows itself strongest effect in the few gestural pictures. [MvL]
More Information
+
Sell
Get a free appraisal for a similar object!
+
Register for
Hermann Nitsch
+
Buying from A-Z
+
Contact a specialist
+
Hermann Nitsch Biography
Share