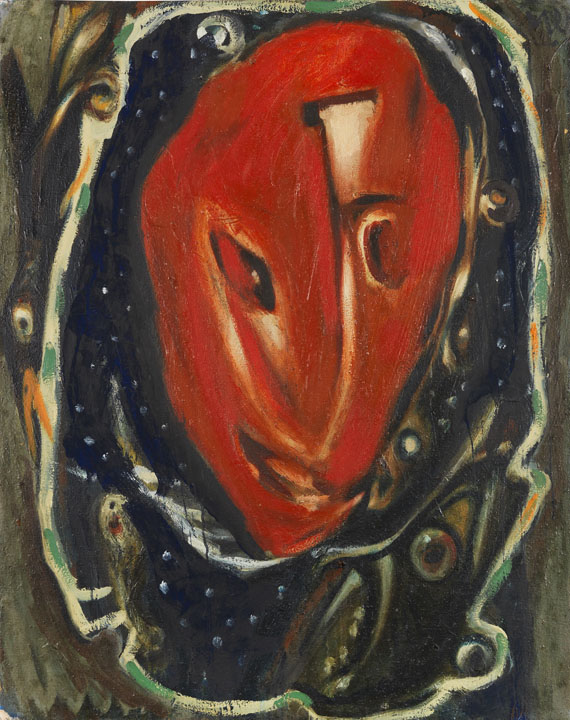 • From the work series of the self-portraits made in the early 1980s.
• For the first time offered on the auction market.
• Privately-owned for almost 25 years.
• Part of significant solo shows, among them at the Munich Lenbachhaus and the Kunstsammlung Nordrhein-Westfalen, Düsseldorf.
• Abstract contemporary interpretation of a mythologic subject.

Essay
Today Markus Lüpertz is considered one of the most important German contemporary artists. Alongside Gerhard Richter, Sigmar Polke, Georg Baselitz and Anselm Kiefer, he countsamong the "Big Five" of German contemporary art. Although painting occupies a front rank in his oeuvre, heworks in an interdisciplinary manner, is occupied witha variety of different fields of visual arts and literature. Numerous sculptural works have been created since the 1980s, of which "Die Philosophin” (The Philosopher) adorns the lobby of Federal Chancellery. As early as in1975 he published his first volume of poetry, which was followed by other lyrical works, so that the title of the work offered here "Ich als Dichter (I as a Poet), isnot a fantastic idea but a self-reflection based on facts. The artist portrays himself as the singer and poet "Orpheus" from Greek mythology in several works. Heenchants animals, plants and stones with a beguiling voice and it is thus littlesurprising that Lüpertz placed a blackbird looking down in the left, a small chaffinch and a bulging-eyed, fish-like creature on the right side of his self-portrait. Since Orpheus, despite his great abilities, does not succeed in conquering death, one can assume that Lüpertz's self-portrait also has a further dimension. The lower left corner is reminiscent of the myth of Icarus, who, punished by the gods, falls into the sea. When asked about his fear of death in an interview, the artist explains: "I can't imagine getting old. [..] I have a lot of fun inlife." (quote from: Welt Online, April 23, 2016). Lüpertz sees the motivation for his painting in a permanent conflict, in the uninterrupted fight against death: painting toperpetuate one's own self, the self-portrait not only as a narcissistic act, but as a snapshot of existence, of one's own state of mind on the long questfor identity. Of course, the self-portraits therefore show no resemblance to the master's appearance. "Abstraction results from the artist's focus on the ego. There are only abstract paintings," explains Lüpertz (quote from: ex. cat. Markus Lüpertz, Haus der Kunst, Munich 2019/2020, p. 364). The artist is more concerned with the representation of his inner self at this verypoint. Just as he denies the objects depicted in his earlier pictures (including roof tiles, tree trunks and tents) any function , radically simplifying and monumentalizing them, he also uses thepainterly construction and abstract color fieldpainting that is so characteristic of his entire creation for his self-portraits,without paying any further attention to the actualmotif of his own face. In terms of form and motif, the self-portraits, justas the work shown here,anticipate the worksfromthe series "Männer ohne Frauen – Parsifal" (Men without Women - Parsifal)from the 1990s to some extent. In them Lüpertz alsoreduces the representation to frontal, mostly solitary faces in indefinable surroundings, whose facial features consist of narrow lines and brightly colored areas and are often surrounded by grid structures comparable to the bright ornate line construct used here. This self-portrait thus proves to be a seminalwork within the artist's versatile oeuvre and once again illustrates the confusing ambiguity of his creation. Lüpertz moves between abstraction and detail, fantasy and reality, spontaneity and intensive self-reflection, bold simplicity and metaphorical encryption. [CH]
More Information
+
Sell
Would you like to sell a similar object?
+
Register for
Markus Lüpertz
+
Buying from A-Z
+
Contact a specialist
+
Markus Lüpertz Biography
Share