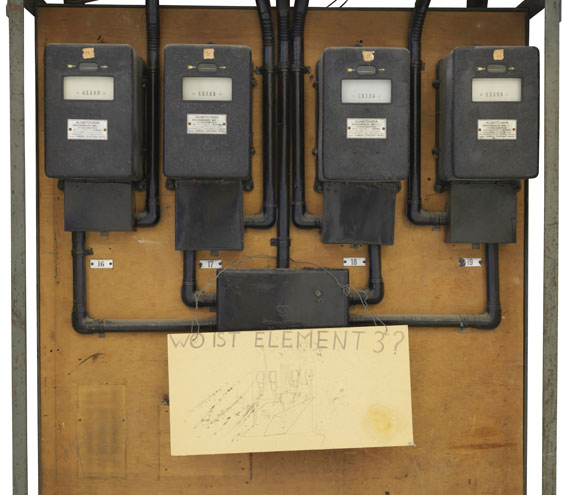 • 'Wo ist Element 3?', as well as the famous work 'Honigpumpe' (today at Lousiana Museum in Humlebæk /DK)), were the 'Social Sculptures' Beuys showed at documenta 6.
• A control panel as an allegory of a source of warmth, light and energy, a metaphyical explanation of an inner meaning.
• Element 3 stands for a way of thinking that, by means of an expanded concept of art, is to become an integral part of 20th century culture.
• Beuys provides the force field of Modernism.
• "Wo ist Element 3" is the continuation of the campaign "Manresa" at Galerie Schmela (1966).

This object is evidently a switch cabinet from a workshop, its power supply especially secured. It seems as if some electrician had walked by and left the note "Wo ist Element 3?" (Where is Element 3?), written on a piece of cardboard. It is the only hint at the connection between Beuys and this functional electrical apparatus. It is a decisive sentence from the art campaign “Manresa”, which Beuys performed in 1966 on the occasion of the closure of Alfred Schmela's gallery space in Düsseldorf's Hunsrückstrasse as a homage to Schmela. The sentence could also be heard in the street through loudspeakers. First of all, of course, the question regarding elements 1 and 2 comes up. Element 1 was a halved felt cross with a copper rod and element 2 was a box - and this shows the direct connection with the present work - that was filled with electrical equipment: “The high-voltage high-frequency generator consisted of a number of different devices with which a high-voltage DC could be generated from a low-voltage AC. The apparatus used in ‘Manresa’ had five individual components: a 12-volt truck battery, a high-voltage transformer, three Leyden jars, a discharger to limit the voltage and a Tesla transformer. The purpose of the integrated system was to transform the 12 volt DC into an AC of about 50,000 volt.” (Quote from: Friedhelm Mennekes, Joseph Beuys Christus denken, Thinking Christ, Stuttgart 1996, p. 110). With the halved cross Element 1 shows the amputated relationship to metaphysics and Element 2 physical instruments from a science lab. Element 3 calls for complementary thinking that must include the paranormal world. So the action has a physical, an electrical and a spiritual background. Element 3 is nowhere materialized, but reverberates as a question in the room. Because Elements 1 and 2 are materially fixed, Element 3 becomes something that does not exist yet, something that is part of the future. Even in 1984, when Beuys linked the switch cabinet with this question, it still hadn’t been answered. The campaign’s two cardboard signs imprinted "ELEMENT 1" and "ELEMENT 2" are in the display cabinet titled "Lagerplatz" from 1962/63 at the Städtisches Museum Abteiberg, Mönchengladbach. A drawing of the four electricity meters and two surfaces can be seen on the cardboard sign in front of the switch cabinet. One surface is inscribed with the word felt, the other shows a copper plate.
There is no doubt that Beuys' Element 3 is a hint to or an anticipation of a holistic way of thinking that has not been attained yet. A way of thinking he aimed to introduce into 20th century culture through his expanded concept of art. Element 3 is the effective spiritual force that caused a change of consciousness in Ignatius of Loyola, warrior and later founder of the Jesuit order. In this respect, this control cabinet object is nothing less than a sign of change. [Eugen Blume]
More Information
+
Sell
Get a free appraisal for a similar object!
+
Register for
Joseph Beuys
+
Buying from A-Z
+
Contact a specialist
+
Joseph Beuys Biography
Share